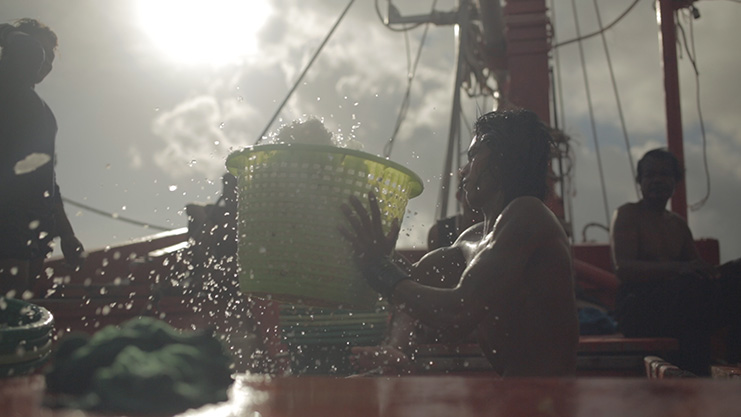 Thailand has a thriving seafood industry that has become one of the largest in the world. As its economy thrives, fewer people become fishermen. To meet the world’s demands, the fishing industry has relied on human traffickers for the past 20 years to source its labor. Young men and boys from countries like Myanmar and Cambodia have been kidnapped, drugged or duped and stowed away on fishing fleets as undocumented workers, often with forged identities.

These men will go for months, even years, without ever seeing land. They are forced to work tirelessly with little sleep, training under harrowing work conditions that could easily slice off their limbs and even their heads. Some have managed to jump ship and escape, often to remote islands in Indonesia, barely managing to eke out a living with help from local villagers. They are constantly in hiding to avoid recapture, and some eventually manage to marry and raise their own families while living on the edge of poverty. Those who are recaptured are trapped in company prisons with little hope of ever being released.

Directors Shannon Service and Jeffrey Waldron set out to tell the stories of these brave, courageous and unfortunate men in their documentary Ghost Fleet, which was funded in large part by Vulcan Productions, a Seattle-based production company founded by Paul and Jody Allen.

“When the oceans empty of fish, fishing boats and fishing communities start doing other things. If you come from a community that has been fishing for generations, that’s the primary protein source for your community and that’s how you make a living,” said Service in an interview. “Fishing boats are the least regulated boats on the sea, so it’s kind of a free-for-all. For most of these communities, beef or goat or chicken is not necessarily available to them, so it’s really important to have the least resources to help protect their own seas.” 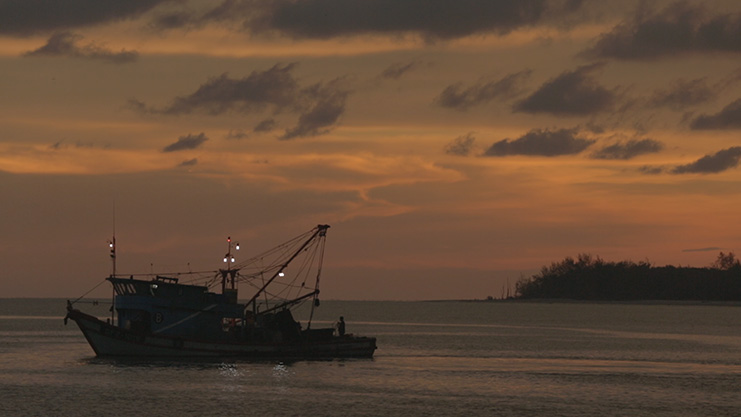 Service has long had a passion for the sea. She surfs, sails and dives. She even lives in a houseboat and has a pet seagull named Fluffy. Perhaps this affinity towards the ocean was what eventually led her to Becky Palmstrom while they were both studying at Berkeley’s Graduate School of Journalism. Prior to Berkeley, Palmstrom had reported in Myanmar where she had heard rumors about men and boys disappearing from villages because of Thai fishing fleets. After finishing their studies in 2011, they decided to pursue the story together. After getting confirmation about the problem from a reliable source, they broke the story about their investigation on NPR.

This film is a continuation of the NPR investigation and follows Patima Tungpuchayakul, one of the founders of LPN, the Labor Rights Promotion Network Foundation. She and her husband started this organization to help the migrant community and had initially focused on protecting children from sweatshop labor. As word got out that LPN was helping migrant workers, hundreds of fishermen started arriving at her doorstep seeking help.

Their stories convinced Tungpuchayakul to investigate the matter and to bring back any stranded men she could find. She is aided in her work by Tun Lin, a Burmese survivor who had been enslaved for 11 years. With his and the other survivors’ help, Tungpuchayakul has managed to locate many, a feat even the Thai government has failed to accomplish.

The IE, in coordination with SIFF, was able to sit down with Service to talk about the Thai government, its fishing industry, and the film’s effect on the survivors.

International Examiner: Why did you decide to name the documentary Ghost Fleet?

Shannon Service: That’s what survivors call the fleet of boats. Part of the reason is that most of them either just don’t have names on them, don’t have ID numbers, or they have a fake ID number. If I’m a captain, I’ll get one license, one ID number and one boat, but I’ll paint [the number] across 17 boats, so you never know which boat is doing what. Because they’re not tracked well and not obeying the law, they are allowed to disappear and do whatever they want. And the men themselves are given fake IDs and fake Thai names, so they disappear as well.

IE: What are the steps the Thai government is taking to solve this problem?

SS: The Thai government is under a great amount of international pressure, most notably from the US and the EU, both of whom have essentially put them on notice. The US tracks countries [according to] a ranking system. If you’re a really great country, you’re in the top tier. If there’s room for improvement, you’re in tier two. If you’re really bad, you’re in tier three. The US had knocked Thailand into tier three for many years, and that really freaked Thailand out because that sends a [negative] signal to American companies. It’s the same thing with the EU. Being European, they sort of have a soccer system: They give a yellow card, which is a big warning, and the next step is a red card. Thailand didn’t get a red card, but the yellow card was enough to freak Thailand out.

Basically, the Thai government is taking more steps to police and monitor their ports. They’re also taking steps to make sure that migrants that come into Thailand and want to work on fishing boats are being tracked. There are more identity documents and positions available that are legal and aboveboard to protect them. Because Thailand is taking the steps into the right direction, the US moved them into tier two, and the EU, I think, lifted the yellow card. The things we would like to see more are prosecution and conviction of traffickers and owners of boats.

IE: What has the reaction been like towards the film?

SS: It has been such a powerful thing to be in a theater with people as they’re witnessing this and to feel how moved they are, especially when Tun Lin and Patima are in the room with them. So many of the fishermen that I talked to genuinely feel like the world doesn’t care about them. [Imagine being] extremely poor, looking for work, getting enslaved, then jumping ship…and nobody comes to rescue you. A lot of these guys went to Indonesian or Malaysian authorities, and they would be put into immigration prison because they were there illegally. And let’s say I’m Burmese, and I contact my embassy and ask them to bring me home. The Myanmar government would tell me it didn’t have the resources to bring me home. Meanwhile, the Indonesian government [won’t] send me home because I’m not its citizen. [Under these circumstances], it’s easy to think that nobody cares about you, but now Tun Lin is witnessing people crying their eyes out. We’ll be going to Congress and to the UN, and a lot of the survivors back home know [this], so it helps them to know this is no longer in the shadows.

IE: What do you think motivates Patima to work so hard for this cause?

SS: She does this work because it came to her and she loves these men. She is working hard with Tun Lin [and others] so that she could transfer this work over to the survivors so that it’s sustainable, and also because it is rightfully theirs. She’s also building a fishing center that she’s raised money for. It’ll be the only one of its kind in the world where the men can come together and learn new skills. It’s also a place for the men to feel at home. A lot of these guys are traumatized. Many [who are fortunate enough] to make it home find that nobody understands what they went through, so they feel isolated. This would be a place the men could get psychological support.

SS: It’s extraordinarily hard for the men and boys who leave home because their family depends on them [for] money. To come back after years with no money is crushing. Some men don’t go back because they haven’t made any money. They miss their family and miss being home, but the shame of going back without money is so huge. Fishing is also one of the most dangerous professions, and these guys were totally untrained, so they’ve lost legs and arms. Tun Lin lost four fingers. There’s definitely stigmatization, but if you come back without an arm and your self-worth [has been diminished] because you are not able to work and provide for your family, it just becomes extremely challenging for them. The amount of shame that a lot of these men carry is heartbreaking, and that’s one of the reasons I think Tun Lin and Patima’s model of working with them to train, empower and change their circumstances is so key. Seeing Tun Lin going to Congress and the UN helps them realize the fullness of their own humanity and potential.

IE: What would you like for people to get out of this film?

SS: I would love for people to think more about where their fish comes from. That’s enough for now. We’re right at the beginning of this whole issue. We have a lot more information about our grass-fed steak and our biodynamic Washington-grown apples than we do about fish. Often fish just shows up or it’s just in the supply chain of something else or it’s in your cat food. We just need customers and citizens to start asking questions. I would also love to see people donating to LPN (wesaveoursons.org).

Now is a critical time to do it since they’re building this incredible center. Our team is also working with Vulcan closely to effect policy change at the national and international level. We have a listserv on our website (www.vulcanproductions.com/ghostfleet) that people can sign up for action work. It’s low traffic but it’s important.