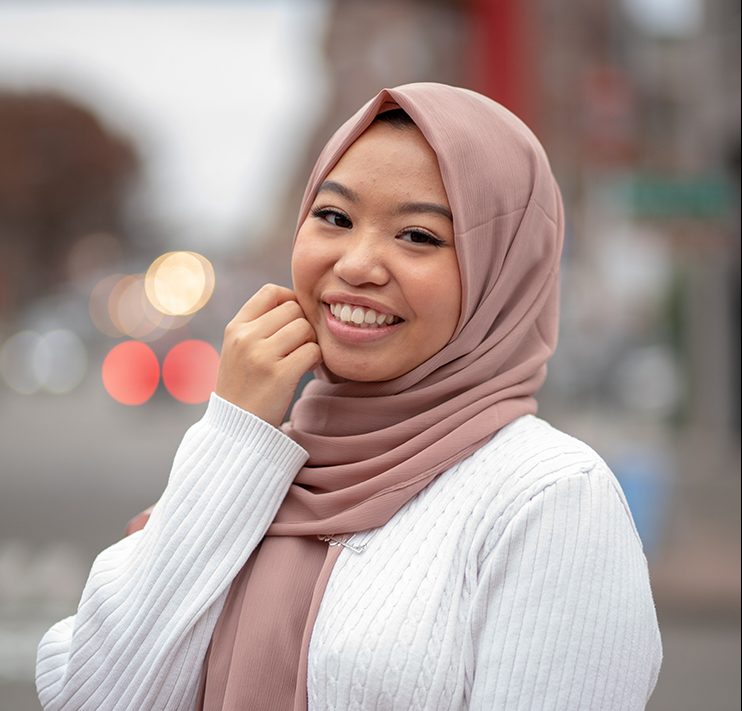 When asked to research the history of the Cham Refugee Community in Seattle I expected to find little to no information on the ethnic group. As a young Cham woman who grew up in South Seattle I struggle to define what it means to be Cham. I often weigh my Muslim identity above my ethnic background, finding it easier to shape my identity around Islamic values than to dive into the complexity of the Cham identity, and I am challenged to dive deeper into the history, culture and community of Cham people.

I was amazed to read Asiroh Cham’s dissertation titled, “Negotiating (In)Visibility in the Cham American Diaspora.” To start from the beginning, the Kingdom of Champa is the historic homeland of the Cham people, one of Southeast Asia’s early Hindu-Buddhist states and was “located in present-day Vietnam for over 1,000 years before conquest by the Vietnamese, Champa’s northern neighbor in 1471.” After the fall of the Kingdom of Champa, “Five centuries later, sixty thousand Chams remained in central Vietnam. But more lived in Cambodia where their ancestors migrated.” However during the Khmer Rouge (also known as the Cambodian Genocide), which spanned over the years of 1975-1979, the Democratic Kampuchea’s only official statement about Cham people was that “the Cham race was exterminated by the Vietnamese.”

The narrative of Cham people as an extinct race was false, and it harmed the community. “Both of these genocides make less visible the presence of Cham people; the Vietnamese conquest of Champa erased the Kingdom of Champa and the genocide in Cambodia devastated the population as the majority of the Cham population perished during this period (up to 80%),” said Osman in Justice for the Cham Muslims.

When fleeing persecution, Cham people had to adapt and learn a variety of languages such as Vietnamese and Khmer in order to survive. In times of conflict, invisibility within the Cham community was a tool that silenced the voices of victims but also shielded the community from further harm. “The Chams who fled destruction of their homelands due to the conflicts in Southeast Asia would end up dispersed in various parts of the globe including Thailand, Malaysia, France, Australia, and the United States,” wrote Cham in her dissertation. “The United States is home to the largest Cham population outside of Asia.” Although Cham people have been portrayed as a disappearing ethnicity, there are Cham communities throughout the globe.

The one I would like to bring your attention to is the Cham population within the United States. In their essay “Muslims in Seattle,” Miriam Adeney and Kathryn Demaster report that the first Cham Muslims fleeing from the Khmer Rouge in Cambodia and the Vietnamese Communist regime arrived in Seattle in 1978. After Cham people resettled, the community and supporting members pooled their resources to fund the creation of the Cham Refugee Community, located in Seattle, and Masjid al-Nur, located in Lacey.

In Lacey, “Chams have built their own neighborhood, a circle of houses with a mosque and imam’s residence in the center,” wrote Adenay and Demaster. In Seattle, they wrote that “the Cham Refugee Center purchased a couple of houses for use as a mosque, and educational and social service center.” These are community centers and places of worship that strive towards creating a space for Muslims of all ethnic backgrounds to join in prayer, educating the youth in Islamic studies and creating events that strengthen the community.

To bring it full circle, as a Muslim woman who is ethnically Cham the journey of writing this piece was filled with more information about Cham people than I could have ever expected. When I approached the topic I knew that the community was underrepresented and that finding history written from the perspective of a Cham person would be difficult. However, I was excited to read about Asiroh’s dissertation and her interviews with Cham people. I remembered that a group of young people in South Seattle created Ramadan, a documentary filmed in 2016 by Abdulgani Mohamad, Samir Nguyen and Yuhaniz Aly. It explored Islam’s holy month and reflections from the perspective of what it’s like being Cham, Muslim and growing up in America. It is a piece that represents the unique experience of three youth and their connection to religion and culture. We need more stories like this. Although the Cham community is characterized as being tight-knit, how well do we know the stories of the people within them?