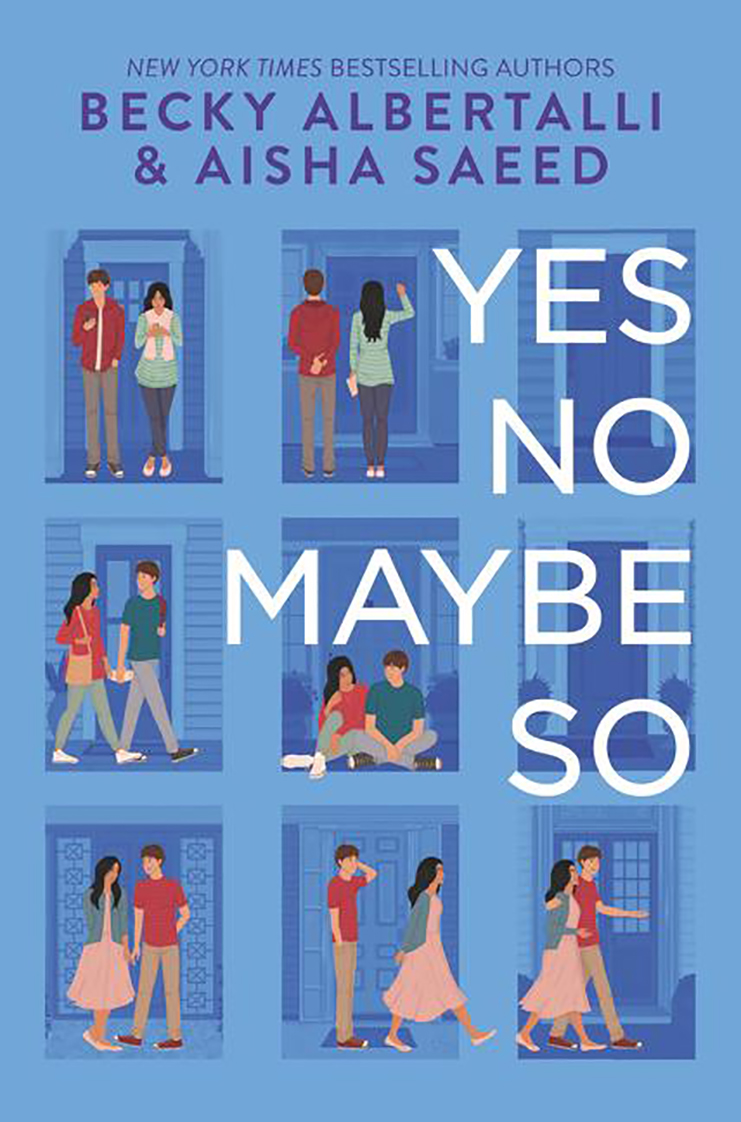 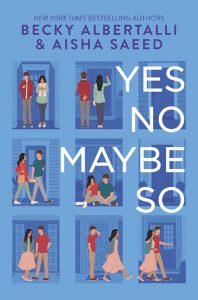 A book about a fictional political race may not seem like the most escapist story to read in the run up to the 2020 presidential election. Co-authors Becky Albertalli and Aisha Saeed released Yes No Maybe So in February, and I read it during a period when the presidential primary contest was just picking up momentum and COVID-19 was new to my vocabulary. Keeping up with real-life current events can be emotionally taxing enough, so I was hesitant to take on a manufactured political contest during this year’s fraught civic tension. Fortunately, Yes No Maybe So proved to be a gratifying tale, and even reignited some of my hope for the change that upcoming generations of voters can inspire.

The story begins when 17-year-old Jamie decides to spend his summer volunteering for the Democratic state senate candidate. Jamie has felt a life-long calling to be a political activist (even though he shrivels up with self-consciousness any time he needs to speak in public), but he is also motivated to escape the tense energy of his household, since his mother is frantically planning his younger sister’s Bar Mitzvah. Meanwhile, fellow high school student Maya feels sullen about her summer because her best friend has fled town to prepare for college in the fall, not to mention the dismal mood her parent’s just-announced separation has put her in.

Their paths cross when Jamie volunteers for a campaign event coinciding with an iftar held at Maya’s mosque to recognize the month of Ramadan. Bored and hungry from fasting, Maya begrudgingly relents to her mother’s suggestion that she canvass alongside Jamie so that her summer isn’t completely devoid of social contact. Soon the pair are knocking on strangers’ doors together and learning how even a single voter’s participation can influence the outcome of the race—all before they can legally cast a ballot themselves.

Albertalli and Saeed have separately earned recognition in the young adult genre before this co-publication. You might recognize Albertalli from her debut young adult book Simon vs. the Homo Sapiens Agenda, which inspired the movie adaptation Love, Simon and two follow-up books with related plots and characters. And Yes No Maybe So isn’t the first book she has written collaboratively, either; in 2018 she released What If It’s Us, about the on-again-off-again relationship of Arthur and Ben, with Adam Silvera. An outspoken advocate for diversifying children’s literature, Saeed’s young adult books Written In the Stars and Amal Unbound both feature a young Pakistani woman struggling with her identity within the structure of her culture’s boundaries around women, and her picture book Bilal Cooks Daal is a sweet tale for any children’s collection.

Combining Saeed’s adeptness for championing the stories of young Muslim women and Albertalli’s joy in celebrating complex and realistic young adult love stories, Yes No Maybe So is the production of a match made in heaven. To start, the Atlanta setting for Yes No Maybe So is the first clue to Saeed and Albertalli’s meant-to-be collaboration: Albertalli was born and raised in the city’s surrounding suburbs, Saeed currently lives in Georgia, and Jamie and Maya traverse the city’s districts to have intimate conversations with community members and what they expect from their elected representatives.

Yes No Maybe So is primarily a lighthearted tale that diplomatically treads on issues of politics. The authors leave no room for doubt that Jamie and Maya are passionate about progressive policies, but most readers, generally, could enjoy the story regardless of their political affiliations. The book’s appeal is primarily in its timeliness; I found it grounding to turn a blind eye to the partisan assaults launched by the players in our nation’s presidential race and read about the vibrancy that Jamie and Maya bring to the campaign, as well as their urgency to work hard for what they believe is right.

The outcome of Jamie and Maya’s “maybe so” romance is predictable from the beginning. However, their banter and personal struggles (Jamie’s fears about making a speech at his sister’s Bar Mitzvah and Jamie’s reluctance to acknowledge that she has a crush on a Jewish boy) read believable. In all, Albertalli and Saeed produced an engaging tale that is uplifting without dishonestly representing the disappointment that can result from working for change in politics.