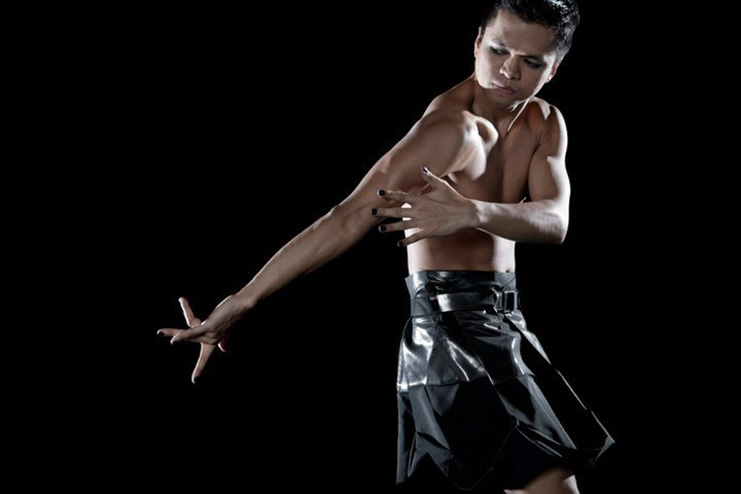 Evergreen City Ballet in Renton is approaching its 25th anniversary, and, ahead of its October 26 Legacy Gala celebrating the past quarter-century and looking ahead to the next, ECB alumnus Bennyroyce Royon has just been named its new artistic director.

Born in Laguna, Philippines, Royon has pursued a long journey to reach this point. “My first introduction to dance was learning Filipino folk dances,” Royon said. “I had so much energy and was very expressive as a kid.”

He moved to the U.S. at age 12 and was immediately hit with culture shock. “I didn’t know how to deal with all of it in a strange and new environment,” Royon said. “So I signed up for orchestra, choir and musical theater in middle school.”

In high school, Royon saw that Evergreen City Ballet was offering scholarships for boys and decided to audition. “My mom was putting herself through nursing school at that time and my dad was a truck driver at a freight company, all while raising four kids,” he said. “So receiving the scholarship was a big deal.”

ECB’s founding artistic director Wade Walthall invited Royon to train under his tutelage. “I was hooked because I finally knew what to do with all the energy I had,” Royon said. “The more I studied about ballet and other forms of dance, the more I wanted.”

This training shaped Royon’s future. “Training and being mentored by Wade helped me get into The Juilliard School,” Royon said. “Who knew that all of those hours spent with him in the studio would greatly impact our lives and help shape who we are as humans?”

After graduating from Juilliard, Royon expanded into creating his own dance pieces. “I founded Bennyroyce Dance in 2010 to create a home for my choreographic projects,” he said. “But then it turned into something larger.”

Royon tried to avoid the burdens of running a company by focusing Bennyroyce Dance on the process of creating each dance work. “It evolved into a place for conversations, collaborations, and experiments through different dance projects,” he said. “I’m always thinking, wondering, and always super curious about life and why things are the way they are.”

But combining the work of dancing and choreography led to challenges for Royon. “Balancing the role of dancer and choreographer inevitably forces you make a choice,” he said. “They are two different lifestyles and demand different things.”

Royon had to learn to divide his time. “Luckily, there would be pockets of time during the year where I wasn’t dancing or didn’t have any projects with the companies I worked for and took on choreographic commissions whenever I could,” he said.

The year after Bennyroyce Dance was established, Royon got a break. “I received my first major choreographic commission from Atlanta Ballet in 2011,” he said. “Then Artistic Director John McFall took a big risk on me.”

McFall told Royon to dream big. “I was just starting out but he was extremely supportive of my wild vision to create a multimedia ballet called Flux,” Royon said. “I’ve been dreaming big ever since.”

Royon feels indebted to the many dancers and leaders who have worked with him during the past decade. “Founding Bennyroyce Dance taught me about leadership,” he said, “how to inspire, manage, and collaboratively work with a team or group of people.”

He has also discovered his identity both personally and artistically. “It takes time to create a clear artistic vision, a mission statement, a modus operandi,” he said. “Taking risks, failing, and getting back up is all part of the process of life and dance has taught me to continue moving forward no matter what.”

Combining that with the practical skills in business and technology that Royon has learned along the way, he feels ready to lead ECB into the future. “I believe in this organization very much,” he said. “ECB help transformed who I am today, and I’m ready to help shape the next generation of dancers.”

To do that, Royon plans to expand the school’s curriculum. “Having a rigorous, well-rounded, and holistic training program is crucial to unlocking the full potential of each dancer at our school,” he said. “It was important for me to put together a strong core group of teachers who will commit to the training schedule this year.”

Royon also wants to make ECB a cultural hub, and one feature of that will be to offer scholarships similar to those what first allowed Royon to study dance. “Dance is like sports — it takes a great deal of commitment and financial resources to seriously pursue a career in dance,” he said. “But not everyone is privileged enough to afford high quality dance education.  We have to continually make dance accessible for everyone.”

Along with all of this at ECB, Royon hopes to juggle his tasks well enough to also keep Bennyroyce Dance running at some level. “My goal in life to is to continually be creating, cultivating, learning, building, moving and discovering for as long as I can,” he said. “And now I have the opportunity to do all of that on both coasts, in NYC and Renton.”

For now, his sights are firmly on implementing a clear artistic vision and offering a transformational experience at Evergreen City Ballet.  “Once you go through ECB’s doors, you never go out the same,” Royon said. “You are changed for life.”