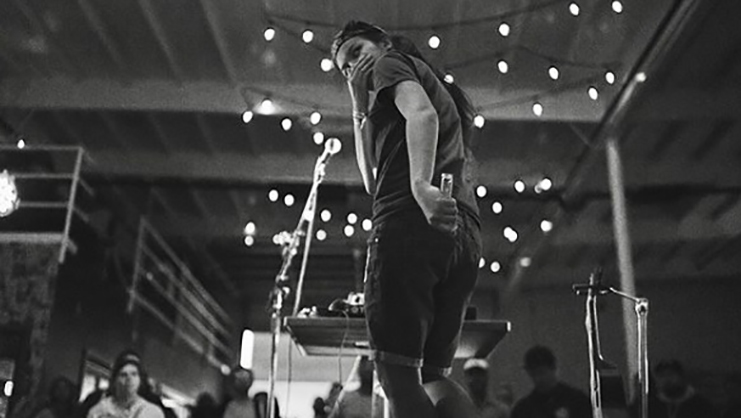 Chong the Nomad (nee Alda Agustiano) is a name you’re going to be seeing a lot of in the coming months – there’s been a ton of hype since her performance at last year’s Capitol Hill Block Party, and she’s not slowing down. Oh, if you’re an avid tumblr user/a fan of “Avatar: The Last Airbender,” you might already be familiar with her work!

The International Examiner caught up with Chong the Nomad to talk about her latest single “Two Colors”, recording in a ramen restaurant and tumblr fame.

IE: How would you describe who you are and what a typical live performance is like?

AA: I am a DJ-producer, and I perform these live DJ hybrid sets where I perform remixes of my originals, I sing, I play the ukulele, and the harmonica. [Live performances] are pretty hyper. I’m pretty low-key if you were to meet or have coffee with me, but something happens when I go on stage. I kind of turn into a Tasmanian Devil that jumps around everywhere.

IE: What’s the meaning behind your name? I heard it was from a certain television series.

AA: I was quite obsessed with the animated television series “Avatar: The Last Airbender” growing up. I would actually bring my keyboard down to my room to the living room, have episodes Tivo’ed, and try to learn the score. The show played a big part in my early interest in music. In the second season, there was a very minor character, Chong, he was like the stereotypical stoner, annoyingly singing every word he said. He was nomadic, so when I signed up for tumblr and some forums back in my early days, I used Chong the Nomad as my handle, so it’s stuck since then.

IE: Are your tumblr days a big reason why you’re doing music now?

AA: Funnily enough, it does play a big part even though I try to forget about it. I created a tumblr for the sequel series to “Avatar: The Last Airbender”, “The Legend of Korra.” I would take samples from the show and then remix them into really zany electro house remixes. I remember posting one and waking up to 4,000 notes and 14,000 plays.

IE: Has your tumblr following become fans of your current music?

AA: Yeah, it’s been hilarious. When I got a little more exposure last January, a lot of people were like, “Huh, I’m pretty sure this is the same girl I followed during my very nerdy tumblr years.” I had someone recognize me at my work once which was a little weird, it’s funny because I want people to know me for my music now.

IE: Since closing that chapter, how do you feel those tumblr days helped you with your career?

AA: Some of the things I learnt from running a tumblr blog helped a lot with how I approach things now. You figure out the internet at a young age and that helps a lot when you’re trying to figure out your music career. It’s an age where social media is a necessity. It helped a lot. I do a lot of weird projects, like the ramen video.

IE: How did that come about?

AA: Oh my goodness, I was in a weird spot. I was still trying to figure out the whole live element with my DJing and finding ways to engage with the audience without adding too many things to make myself nervous. I hit writer’s block around that time and was trying to figure out ways to spark creativity. Part of the reason why I was in the spot was because I was at my day job all the time, at the ramen restaurant, and I hated it. I woke up one day with the thought of bringing my laptop to work, pulling up some sounds, and making something weird from that.

I’ll do whatever to spark the creativity in me, even if it means looking like an idiot and carrying a Macbook around a bunch of bowls of bowling ramen.

IE: Can you tell me a bit more about your new single two colors?

AA: I actually wrote “Two Colors” more than a year ago. It was based off my girlfriend. We had just started dating at the time, and I think I wrote it after a date with her. It was a transitional time where I was walking into every experience blind and I didn’t know what the future held for me. I was feeling really timid about everything, that shows when I sing my vocals.

I finished it three months ago when I was finishing a bunch of singles… It was interesting because I was in different place at the time when I finished the song. It was kind of poetic I had just moved in with my girlfriend.

IE: That is so sweet! How does your girlfriend feel about the song?

AA: I was actually kind of a dick to her for a little bit about the song. I played a really early version to her once in the car. She really liked it a lot. A couple of months later, I mentioned I wrote a song about her, and she didn’t remember me playing it for her. She asked me to play it again, and I was like, “nope!” Eventually, I played it and explained the meaning to her. The color art is based off of us – my girlfriend has two colors in one eye, and the cover art reflects that.