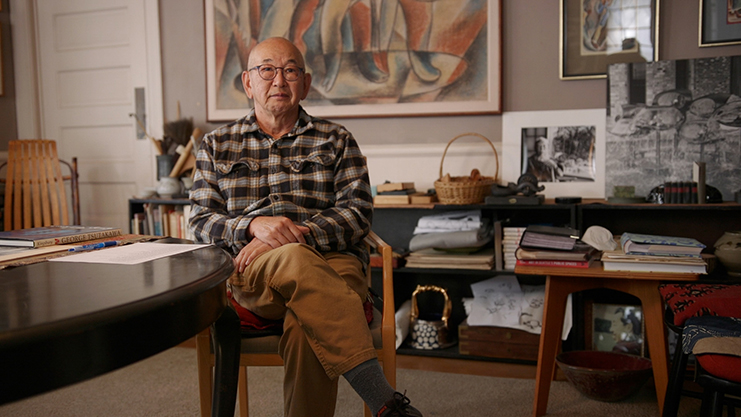 Gerard Tsutakawa is following in his father’s footsteps. The elder Tsutakawa (George, 1910 – 1997) graced Seattle with numerous bronze fountains and other public art, and the younger Tsutakawa learned his father’s craft and eventually began creating public art commissions of his own. Now, Gerard Tsutakawa’s work is featured in an exhibit at the George Tsutakawa Art Gallery inside the Wing Luke Museum.

The younger Tsutakawa reports that his father’s career was always a family affair. “There were four of us kids, and we all participated in my father’s art in different ways,” he said. “Marcus, Deems and I all spent time in the studio shop.”

But Tsutakawa’s interest wasn’t about peer pressure. “I have always been interested in building things from an early age, so, of the three boys, I continued to spent time in the shop,” he said. “In 1970, I helped my father with the construction of the Pacific First Federal (now Chase Bank) Fountain in Bellevue.”

From then on, Tsutakawa worked as his father’s apprentice, learning design, welding, construction and installation of public art. “I always felt that if I could hang in there long enough,” he reminisced, “there would be a break though point where the work would pay off.”

And it did: when Tsutakawa was 31, he received his first public art commission for the Donnie Chin International Children’s Park. “The International District park is focused on children, and I had a grade-school daughter at the time,” Tsutakawa said. “It was an interesting challenge to merge a cultural theme and an interactive playful aspect.”

The piece is entitled Dragon. “I used the skills from building my father’s fountains,” he recalled, “and used my daughter and her friend as testers to construct the play sculpture.”

Since then, Tsutakawa has completed about 100 large sculptures and about the same number of smaller pieces, and he claims not to have any favorites among his own works.  “I continue to work and I always get excited over the current or next project,” he reports.

Still, certain sculptures gave his career an outsized boost. “The MITT at the ballpark has been one of these for acceptance and visibility,” Tsutakawa recalled regarding his 1999 installation at Safeco Field. “It gave me a chance to reach a larger audience.”

But Tsutakawa hasn’t stopped to bask in his success. “In 2018, I did Tonbi for the Amazon headquarters,” he said. “It was the largest, most challenging project of my career and I feel that it represents what skills and ideas I’ve developed in public art as an artist.”

Over the decades, this second-generation public artist felt grateful for his family’s support. “The challenge has always been to be creative, raise a family, and find the next job,” he said. “There are peaks and valleys, and I try to stay flexible in my work expectations.”

The current peak is Tsutakawa’s current exhibit at a community museum that he reports supporting since the 1970’s. “It was an honor that they named the gallery after my father,” he said, “and a double honor that I get to show in the space.”

And yet, he deflects to the show’s designer in a gesture of humility. “I think that Rachael Kitagawa did a fantastic job curating the show,” Tsutakawa said of the current Wing Luke exhibit. “She deserves most of the credit for making it happen.”

Together, Tsutakawa and Kitagawa have presented a blend of video, sketches, photographs, small bronze sculptural components, and stories, interweaving the work of both Gerard and George. A map of their combined works is displayed on the center wall of the exhibit, and inspired pedestrians can then utilize the Wing Luke’s website to continue their explorations on a walking tour around downtown Seattle.

In addition to the rewards of creating public art seen by thousands, Tsutakawa does a lot of low-profile work maintaining his father’s sculptures. “I get calls often about my father’s artwork and keeping them up,” he said. “It amounts to a lot of work.”

But endless labor doesn’t deter him. “We as a family have a commitment to maintaining the collection of paintings and other artworks,” he said. “Hopefully the next generation will keep it going.”