Fighting adversity on and off screen, Japanese-American actor George Takei helped to shape Asian-Americans’ portrayal in the media.

Takei’s most prominent role was playing Hikara Sulu in the sci-fi television show Star Trek. Takei not only broke boundaries due to the success of the franchise, but also because he was among the first wave of Asian-Americans to do so. 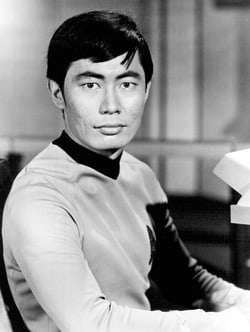 George Takei as Hikaru Sulu.To Be Takei, will be headlining at the Seattle Asian American Film Festival. The documentary chronicles Takei’s early life and career, including time spent at internment camps.

Kevin Bang, the co-director and co-founder of the Seattle Asian American Film Festival, said Takei’s film is well suited for opening night because he is both an icon and celebrity to the Asian-American community, and his name resonates with a lot of people.

“We are featuring Takei’s documentary as the opening movie because he is a compelling figure in Hollywood and for Asian Americans,” Bang said.

Connie So, a senior lecturer in the Department of American Ethnic Studies at the University of Washington, said there are a lot of people who came before Takei, but he adds to the legacy they created.

When looking at Takei’s legacy, it is important to look at Asian Americans who preceded him in film, like Anna May Wong, the first Chinese-American actress; Mako Iwamatsu, a Japanese-American actor and voice artist; and Bruce Lee, who was a martial artist, actor, screenwriter, and producer.

After immigrating to the United States from Hong Kong as a child, So said that Takei was among the few Asian-Americans that she would see on television.

“I remember that when I was young, anything Sulu did in Star Trek a lot of us really watched,” So said. “He was one of the first actors to be articulate on the big screen, and was a consistent character on the show. All the other Asian-Americans were always the waiter, waitress, or the houseboy on TV.”

However, despite So’s fondness of Takei for breaking racial barriers, she believes that to a certain extent he is still stereotyped.

So believes Takei was relatively assertive on the show because he was a lieutenant and commanded certain aspects of the starship Enterprise instead of being cast in a subservient role. It wasn’t until later that she was more aware of how Sulu was never involved with any women on the show because Asian men often don’t have romances in American movies.

“When [Asian men] do have romances they often play the feminine role,” So said. “Which is why a lot of the time you see Asians as feminine and weak, and it adds to the stereotype.”

“If you wanted to tie that into George Takei, although he has brought Asian-Americans into the mainstream light, I wouldn’t say that he has had any significant or revolutionary impact on media,” Yu said. “He played Sulu in Star Trek in the ’70s, but I wouldn’t argue that it completely revolutionized Asian-Americans in the media. He was strong, but of course he wasn’t the leader. He was just part of the cast.”

Yu continued to say that Takei does prove to be a good symbol for Asian-American advancement. He captured a role that was part of the legacy that is Star Trek, and used his fame to bring attention to real political issues as well as racial issues.

People look at Takei’s legacy as a conundrum. He was able to make a name for himself in the mainstream media during a time when Asian-Americans rarely played roles in film. However, the roles he did play had subtle stereotypical innuendos.

“[To this day] Asian American men in media are usually portrayed as the sidekick or inherently good at martial arts, and women are shown as passive and submissive,” Bang said. “That’s an issue because these sorts of images permeate society and then subconsciously people see Asian folks this way because that’s the representation on TV.”

Bang believes that the Seattle Asian American Film Festival is a way to remedy the lopsided landscape of how Asian Americans are portrayed in film. The films at the festival will showcase the spectrum and richness of the Asian community.

“In our films, Asian-Americans are not cast as these distasteful caricatures but instead these stereotypes are challenged,” Bang said. “Seattle has a significant Asian population. This is an opportunity to see their stories and for Asian folks to see stories that resemble their own on the big screen and to celebrate it. The festival exists to counter mainstream media.”

Wes Kim is a filmmaker and directed the Northwest Asian American Film Festival from 2003 to 2007, which is now the Seattle Asian American Film Festival. He believes that the main reason why there are niche film festivals for Asian-Americans is because Asians need an outlet to express their voice through film without a stereotypical tone. In regards to Takei’s legacy and his film, Bang believes what Takei has accomplished is extremely notable.

“[When I was younger] I wasn’t really thinking about Takei’s presence as that remarkable but I also wasn’t aware of how rare it was for there to be a relatively well-rounded normal Asian-American character on a mainstream TV show. … In hindsight I realized that was an amazing thing,” Kim said.