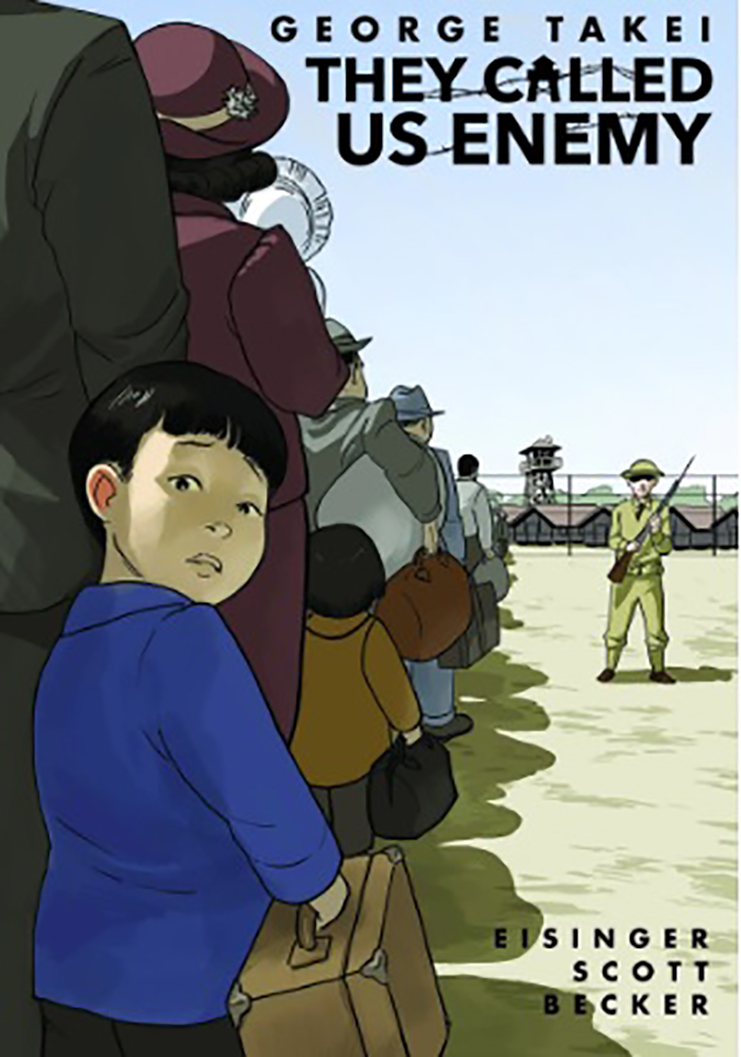 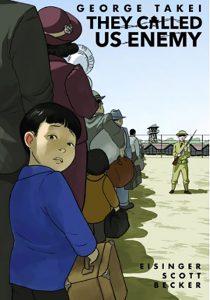 “Memory is a wily keeper of the past,” actor George Takei writes, “usually dependable but at times, deceptive. Childhood memories are especially slippery.”

Takei should know; his graphic memoir They Called Us Enemy (Top Shelf, 2019) depicts a textured struggle between his “bright” and “warm” childhood memories of his wartime incarceration and his adult knowledge of that history, gleaned from introspection and his acting and activist careers. Co-authored with Justin Eisinger and Steven Scott, Takei’s book is an ambitious combination of camp memoir, educational tool and autobiography. It’s not an easy task, and though the results are slightly uneven, the book will appeal to younger and older readers on several levels. (Full disclosure: I am also co-writing a graphic novel about Japanese American Wartime Incarceration history with Frank Abe, Ross Ishikawa and Matt Sasaki).

As a camp memoir, the book is at its most satisfying when it shows, rather than tells. The “boiling” heat when Takei’s family arrives at their barrack in Rohwer is palpable; the tender glances that his parents exchange during a rare jeep ride to a farm outside camp; the magic of Takei’s first snowfall at Rohwer. In this sense, the book delivers wonderfully with a rich portrait of the sensory memories that Takei experienced in his childhood. Illustrator Harmony Becker has drawn Takei and other children in the book as Japanese manga kids with round faces, wide eyes and mouths. The adults are drawn in more meticulous and specific detail. As readers, then, we see and feel the child’s world of innocence more vividly. It’s also wonderfully refreshing to see these adult Japanese American faces, especially the Issei, depicted as complex humans and not as caricatures.

Dedicated to Takekuma and Fumiko Takei, the book’s grateful depiction of Takei’s parents is also one of its moving aspects. While some depictions of the Issei and Kibei might render them as helpless and hindered by language barriers, Takei’s book provides wonderfully human and even humorous examples of the resourcefulness of Takei’s Kibei mother and the endurance of Takei’s Issei father.

It’s also moving to see a reenactment of a typical Nisei/Sansei postwar discussion between Takei and his father about protest. “Why did you comply with something that was fundamentally wrong?” Takei asks his father, frustrated with the older man’s apparent lack of outright resistance. Takei’s reflections on his own arrogance are clearly hard-won and “pain” him even now. He realizes only later that his father’s discussions and his experiences have led him to value democratic ideals and discussions.

It’s also powerful to see Takei’s thoughtful and nuanced discussion of his parents’ responses to the “loyalty questionnaire,” laid out with Japanese American faces behind barbed wire and then with the same faces behind barbed wire and a Japanese “rising sun” background. The book spends some time highlighting the sacrifice and patriotism of the Nisei soldiers and the 442nd, but also spends some time on the case of Fred Korematsu as well as the Heart Mountain draft resisters and Tule Lake renunciants (including Takei’s own mother). “I’m proud of [the principled objectors],” Takei says, “and I consider them just as heroic as those who fought on foreign battlefields….All these Japanese Americans showed incredible courage and heroism.” This balance in perspectives is relatively rare in camp literature, and it’s a welcome change to see it in Takei’s book, particularly with the JACL’s August 2019 passage of Resolution 3, apologizing to the Tule Lake residents and resisters.

As educational tool, the book includes a great deal of valuable historical context, provided mostly through Takei’s “voice over” narration and reflection. In a few minor places, the book seems to trade accuracy for exposition, as when the soldiers evicting Takei’s family cite Executive Order 9066 as the reason for their home invasion.

At other times, it feels as though the book takes historical detours which have less to do with Takei’s biography and more with the book’s understandable desire to introduce readers to camp history and context who might be new to this material. An example is the story of Herbert Nicholson, whose storyline of delivering books to several camps does not seem to touch Takei’s directly, but seems inserted in order to provide readers with an example of White allies.

One glaring omission—with the important exception of Takei’s mother, there are no female heroes or main characters in the book. Mitsuye Endo’s Supreme Court case which led to the closing of the camps is absent, even with the discussion of Fred Korematsu and the single line alluding to the cases of Gordon Hirabayashi and Minoru Yasui. Daniel Inouye’s heroism through military service, Herbert Nicholson as ally, Martin Luther King, Jr. and the civil rights movement—but no women.

As an autobiography, Takei’s fans might want to see more development of Takei as actor and activist; much of this material, including redress and the Japanese American National Museum, appears in the last 25 pages of the book and thus feel highly compressed. Fans of Takei’s acting will especially appreciate reading about Takei’s first meeting with Star Trek creator Gene Roddenberry, and his discussion of the musical Allegiance.

Overall, Takei’s book offers much to its readers, particularly those who want to see and feel the experience of incarceration filtered through a young child’s eyes.