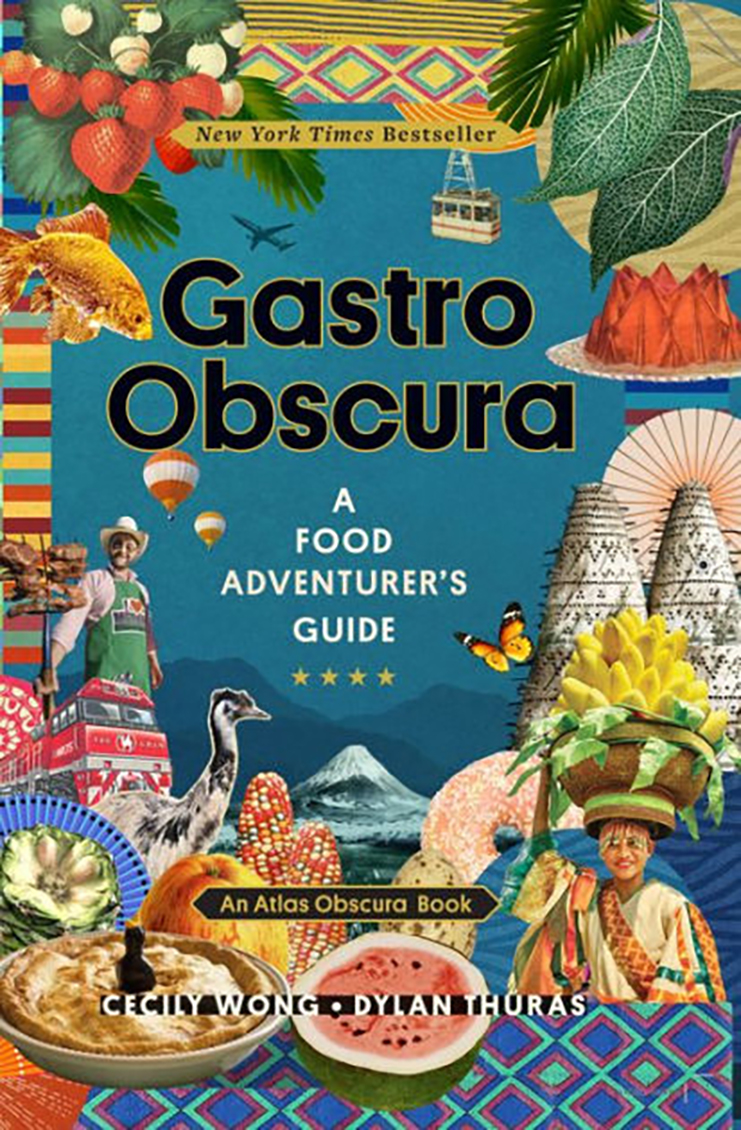 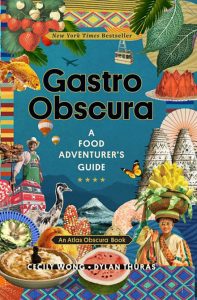 A book titled Gastro Obscura is certain to raise eyebrows. It did mine. To add to the intrigue, its subtitle, A Food Adventurer’s Guide, was the ultimate lure.  I am not the most adventurous gastronome. I don’t run with the likes of Anthony Bourdain, award winning culinary rock star, circling the globe sampling nasty bits of sheep testicles or unwashed warthog rectums for TV audiences; nor do I follow Andrew Zimmen, host for 30 seasons of Travel Channel’s Bizarre Foods series. Both made their fame and fortunes ingesting morsels normally perceived as either exotic, somewhat disgusting or horrifically revolting.

Dazzling duo aside, shock value paired with the pursuit of dining does not, for me, a meal make. I must admit I lust after more conventional fare. It was the book’s Food Adventurer’s Guide descriptor that cajoled me into believing that Gastro Obscura might result in a sampling of endless delectable buffets of global goodies – a potent promise of Michelin class über yum-yums. I couldn’t resist.

Gastro Obscura is an offshoot of the #1 New York Times bestseller Atlas Obscura, The Atlas mission is to “inspire wonder and curiosity about the incredible world we all share” and is focused on its guiding principle: “wonder can be found around every corner” of the planet.

It was established in 2009 by author Joshua Foer and documentary filmmaker-author Dylan Thuras. It is an “American-based online magazine and travel company” that provides access to little known excursion destinations with a seemingly unending inventory of unusual, esoteric, often enigmatic, overlooked stories of earth’s diamonds-in-the-rough. Its website articles provide a diverse range of subject matter that includes history, science, food, and relatively unknown places.Acknowledged as the “National Geographic for millennials,” it is also billed as “An Explorer’s Guide to the World’s Hidden Wonders.” An additional publication, The Atlas Obscura Explorer’s Guide for the World’s Most Adventurous Kid (a New York Times best-selling book for children), further augments the Obscura franchise.

Since 2017, the food-obsessed Gastro Obscura has been run by a team within the Atlas brand, which supplies a “treasure trove” of ideas and articles on which Gastro often utilizes. Gastro Obscura scours the earthly macrocosm in search of the incredible universe of food. It bills itself with in-your-face and on-your-plate promotional gotcha!-hypes: “A must-read for  anyone who eats” dispensing “…the many fascinating ways that humanity has figured out how to feed itself” and “The definitive guide to the world’s most intriguing food and drink.” Who could resist?

Gastro Obscura explores compelling, often riveting accounts and stories uncovered in 120 countries across seven continents (Europe, Asia, Africa, Oceania, North America, Latin America and Antarctica). A thumb through the hefty encyclopedic 438-page book is akin to a reminiscent wander through the iconic Sears, Roebuck Catalog, with its inventory-crammed pages brimming with advertisements for “everything from underwear to entire home building kits.” It was “the Amazon.com of its time.” Founded in the late 19th century, the catalog was called a “mirror of (the) times, recording for future historians (the day’s) desires, habits, customs, and mode of living.” In looks and feel, it might have served as a conservative archetype for the burgeoning Obscura brand.

Eager to discover what the curious, quirky minds of co-authors Cecily Wong and Dylan Thuras created with their Gastroglobal guide, I hastened past the vividly illustrated jacket cover and quickly scanned the pages to see for myself. Color photos abound throughout. Page after page is packed with a vast assortment of articles – short to medium in length – titles calling attention to past and present atypical foods, drinks, places, events, animals, people, markets, eateries, rituals, curiosities and more.

Whose attention could not be aroused or captured by chronicles of Weaponized Food: Chocolate Bombs, Cheese Cannonballs, Poison Milkshakes; Table Etiquette in the Victorian Age; The Great Fruitcake Toss; The Monkey Buffet Festival of Thailand; Buddhist Temple Cuisine; Labradorian delicacy: Fried Cod Tongues with Scrunchions; the Hindu Festival of Attila Pongala in India where four million women gather to make Rice Pudding; When Guinea Pig Goes Gourmet: From Humble Ceremonial Food to a Delicacy Among Urbanites.

Would a three-part seminar on Recreating Ancient Recipes, taught by an archaeologist and a culinary historian, capture your attention? Or a travel trek, Tracing the Roots of an Imperial Cuisine, pry open your wallet for a week-long “feast for all your senses” journey highlighting culinary workshops, wine tastings, market tours, vineyard visits, performances, and demonstrations? Might you be swayed enough by the knowledge that “There are over 2,000 species of edible insects, each with its own flavor profile, texture, and functionality” to join consumable bug expert Chef Joseph Yoon of Brooklyn Bugs for an introduction on how to incorporate creepy crawlers into your daily meals? An added bonus: “Students who plan to participate in the insect tasting will have access to a special $50 bug kit.” Be still my heart.

For its ardent audience of devotees, Gastro Obscura’s aim is to scratch-the-itch, feed-the-need and quench-the-thirst of its over 8 million-plus loyal followers.  One is swaddled – some could allege “smothered” – in around-the-clock missives, daily podcasts, Instagrams, weekly New Favorite Things bulletins, and the Gastro Obscura website “where intriguing stories (are) served fresh daily – all aimed to build community and commitment. Powerfully persuasive, unflinching and gutsy, irresistibly imagination, the will to overwhelm is seemingly limitless in the Gastro Obscura universe.

The multiple voices and visions, intrinsic to the book, evoke the familiar quote “It takes a village . . .” leaving one to ponder what hamlet and whose offbeat minds harnessed the hundreds of crowd-sourced contributions, fine-tuning their citations into this mega Gastro publication.

Half of all entries in the book originate with the co-authors themselves. To my knowledge neither lived in bat infested caves, created mammoth sculptures from skunk skins or swallowed an entire hippopotamus in one gulp on safari – credentials one might have thought to be essential prerequisites. However, the not-so-obscure co-authors have a robust combined track record between them.

Dylan Thuras is the cofounder and creative director of AtlasObscura.com (an encyclopedic online guide); host of The Atlas Obscura Podcast, Curious Expeditions; co-author of “An Explorer’s Guide to the World’s Hidden Wonders” as well as The Atlas Obscura Explorer’s Guide for the World’s Most Adventurous Kid; and in addition, he hosts the Atlas Obscura YouTube series 100 Wonders.  The self-proclaimed “father of two maniacs”, Thuras has been a correspondent for NPR’s All Things Considered, and host of the NYTimes T-Brand podcast So You Want to Work Abroad”.  Raised in Minnesota, schooled at Bennington College (BA in film, writing, animation, visual arts), he lives with his family in the small town of Rosendale, in New York’s Hudson Valley.

Chinese-Hawaiian Cecily Wong was born in Honolulu and raised in Eugene, Oregon. A prize-winning novelist and “vault of obscure food knowledge” she is the author of the 2015 novel Diamond Head; a food writer at Atlas Obscura, co-author of Gastro Obscura: An Explorer’s Guide to Food, and author of Kaleidoscope, due out in 2022. Her work has also appeared in the Wall Street Journal, the LA Review of Books, Newsweek, Honolulu Magazine, SELF Magazine, the Portland Monthly and Bustle. A graduate of Barnard College, she spent 13 years living in New York and currently resides in Portland, Oregon with her husband and daughter.

In their book’s Introduction, Wong and Thuras wrote: “We have always believed that wonder can be found wherever you are open to searching for it. Well, here it is, sitting right in front of you, waiting to be eaten. Dig in.”

For those who find satisfaction in vicarious arm-chair escapes, enjoy reading about the unfamiliar, delight in discovering the unconventional, and seek bizarre, outré experiences, Gastro Obscura: A Food Adventurer’s Guide is your virtual anti-lockdown, pandemic entertainment medium and social distancing companion: your full-on COVID vaccine and booster Rx for the duration. Masks not required.