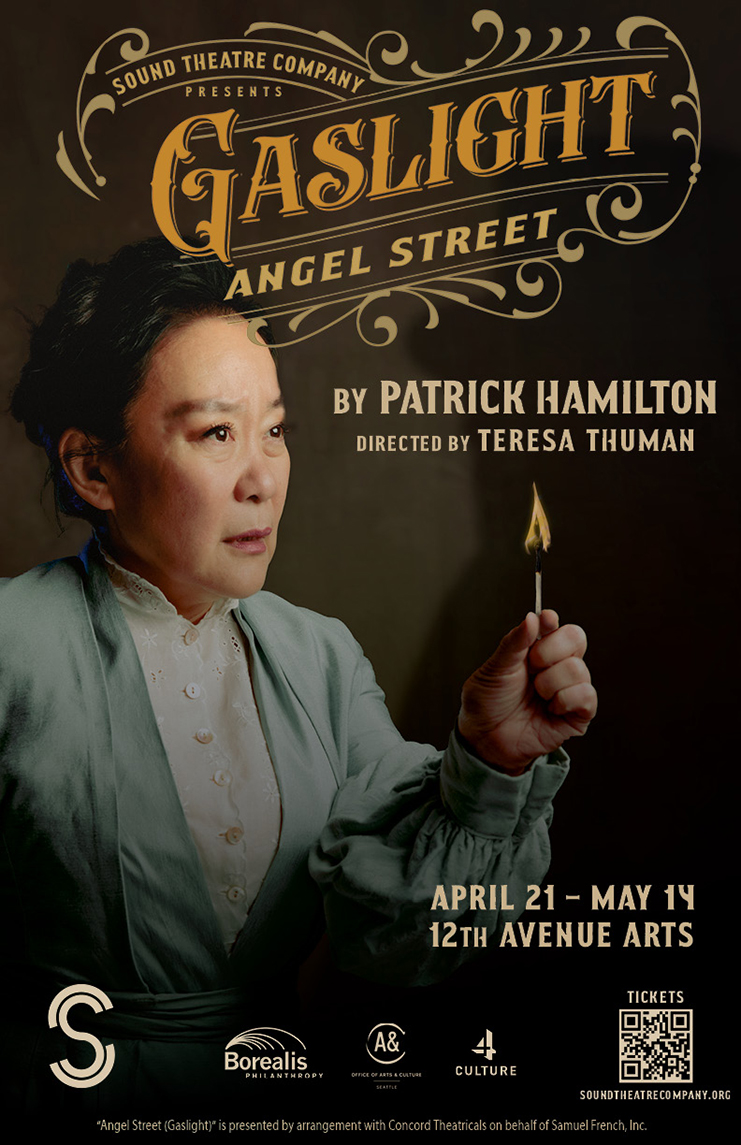 Gaslighting is a term we’ve all heard in recent years, and it broadly describes when someone attempts to make another person doubt their perceptions or question their own reality. In short, gaslighting is an effort to make someone else feel disoriented or even crazy.

The term originates from a 1938 play, Gas Light, written by British playwright Patrick Hamilton, who presented the work under the title Angel Street in the U.S. The play centered on a husband who strives to drive his wife insane in order to commit theft. The play was later adapted as the 1944 movie Gaslight, but now, local group Sound Theatre Company is returning to the show’s roots by presenting Hamilton’s original long-running play.

Local actors Kathy Hsieh and Aimee Chou join STC’s cast of Gaslight (Angel Street). “Teresa Thuman, director, had reached out to me back in 2018 and sent me the script for Angel Street,” Hsieh said. “She was interested in exploring the concept of gaslighting given what was happening in our country by the person holding the highest office at that time and that so much of what was happening politically was a form of gaslighting.”

Chou finds the term to have continuing relevance. “The verb ‘gaslighting’ is deeply embedded into my peer-age cohort’s vernacular,” Chou said. “Russia’s invasion of Ukraine coincided with the beginning of this project, and soon after, out came the articles on how gaslighting was, and continues to be, a tool to justify the war.”

Prior to this project, neither actor had read the earlier play or seen the 1944 film, but both saw the parallels to our current events. “I was already familiar with the term gaslighting and was very intrigued by how relevant the term had become in my work related to creating greater racial equity,” Hsieh said. “Gaslighting is a way of describing what happens when people of color, women, people who are disabled, are told that there is something wrong with us, that we are at fault when we don’t ‘fit’ or meet the expectations and standards of a ‘professional’ work environment, when in reality, it’s because we have been expected to change everything about who we are in order to fit standards that have been created and set as the ‘norm,’ standards that can best be described as white supremacy culture.”

Hsieh plays the role of Bella Manningham, who loves her husband Jack, but becomes the object of his manipulative behavior. “The play is set-up so that you’re not sure who to believe,” she said. “Who is the liar? Bella? Or Jack? Whose version of reality is true?”

Heavily influential in Hsieh’s portrayal is her own personal experience. “I had seen and worked against the dynamics of gaslighting and created trainings and supported many people who work in the arts and in City government and other workplaces who had been experiencing being gaslit,” she reported. “But last year was the first time I experienced it directly myself in a professional setting and I never could have imagined how traumatizing it can be had I not gone through it myself.”

Both in Hsieh’s real experience and in Gaslight (Angel Street), the linchpin is the validation of supportive friends or colleagues. “The pain and humiliation experienced is exacerbated from the judgment of others, until the truth is finally revealed,” Hsieh described. “What actually saves the one being gaslit is having people willing to not be bystanders or flying monkeys (people who abuse by proxy because they support the abuser by doing their bidding and thereby help in gaslighting someone), but who are willing to step in to uncover the reality of the situation in order to stop it.”

In Gaslight (Angel Street), one of those flying monkeys is Chou’s character, Nancy, the irreverent maid in the Manningham household. “Our director Teresa Thuman envisioned her as a Cockney character,” Chou said. “So my prep includes dialectical training, for a working class London East Ender, as well as working with a Director of Artistic Sign Language (DASL) named Christian Vasquez.”

With this production, STC pursues its mission of giving voice to the dignity and diversity of the human experience by promoting accessibility. “I’m deaf, so the whole team purchased boxes of clear masks to make it easier for me to speechread and follow conversations,” Chou said. “We are incorporating elements of both BSL (British Sign Language) and Visual Vernacular (VV). It’s been a blast to step out of my normal English and American Sign Language linguistic patterns!”

As the COVID-19 pandemic transitions to its endemic state, both actors have been satisfied with the production’s health protocols. “The pandemic continues to be a moving target, and we’re continually checking in and reassessing,” Chou said. “Because our rehearsal schedule is not tightly compressed, I feel pretty good about our ability to have offramps for if someone tests positive.”

This will allow Gaslight (Angel Street) to benefit from the special magic of live theatre. “There is a unique energy, a palpable chemistry, when human beings share physical space with each other,” Hsieh said, “and I think for a psychological thriller like this play is, that added layer of being in-person will make the material even more impactful for the audiences who experience it in person.”

Both in-person and online, the production hopes to highlight the insidious nature of gaslighting. “My castmate Hisam Goueli (Detective Rough) brought up something that blew my mind,” Chou said. “In order to successfully gaslight someone, it requires earning some degree of their trust in the first place.”

Hsieh translates this new awareness into a warning. “People who are highly empathetic, or those who like to believe the best in everyone,” she specified, “can be particularly susceptible because they cannot perceive that there might be people who are so psychologically manipulative.”

Chou emphasizes that this theme is much larger than this play: “The implications of that are huge, for everything from relationships to foreign policy to business.”