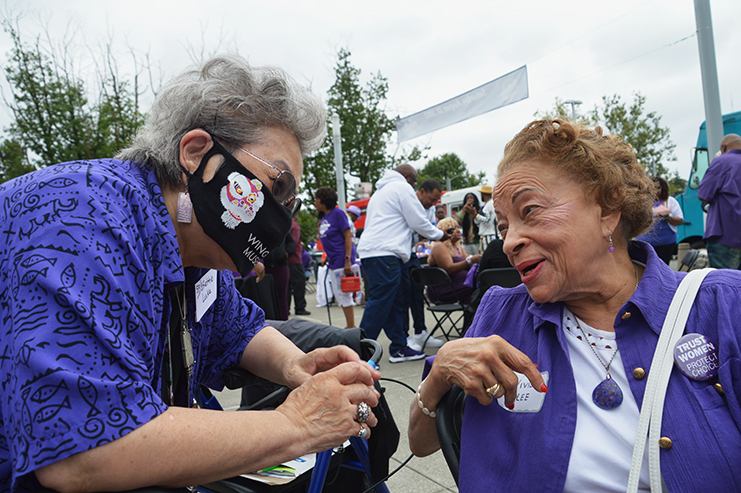 It was a purple and Bulldog tidal wave at the Garfield Centennial Celebration.

The energy was boisterous as alumni, grandparents, family, children, and students gathered at Garfield High School to celebrate its 100th year anniversary on Saturday August 27, 2022. There was an air of nostalgia and novelty, as old friends reconnected at decade reunions while new friends introduced each other and their connection to Garfield. One person who came to do both was Vivian Lee ‘55.

She was dressed in a purple monochromatic outfit: from her matching blouse and trousers, to her earrings and her shoes – every detail was a subtle nod of pride for her alma mater. She chose an uncrowded table to sit at, with a few unfamiliar faces, and eased herself into the conversation by confidently introducing herself.

Soon, the table became full. Friends, old and new, laughed while stopping by to share their memories of high school. Lee shares why she attended the Centennial today.

“I came back today because I’m from the class of ‘55 – we were a very close class that had many reunions. I honor Garfield because it seems like the one that remembered me.”

She remembers the weariness of moving from high school to high school in the Seattle area. She was looking for a place to call home — when Garfield became one. Garfield’s significance became even more profound, a symbol uniting her to her late husband, Owen Griffin Lee. Although their timelines were different, it was strictly a coincidence that they both had a connection to Garfield, one as a student and one as an administrator. They met through family, and were married for 41 years.

The day’s crowd was intergenerational and diverse, a reflection of the rich history of the Central Area as a neighborhood once home to notable populations of Italian, Japanese, Jewish, and African American folks.

For Harald Hyllseth ‘15, the former 2014/15 ASG President, this history is inextricable from Garfield’s cultural imprint.

“What this school means to the community is…like you see it here,” Hyllseth continues, “lots of young people, lots of elders. The school (before gentrification happened) was a cultural icon: MLK spoke here, Barack has spoken here. We have a lot of history of social activism, sports, and music. It’s a magnet school for a lot of different things — the culture is Garfield. So, Garfield is the culture.”

Noah Sheehan ‘16 decided to volunteer today to give back to a community that raised him.

“Garfield is the center of the community; it’s not just a school. It’s the Central District. It’s where I grew up, and it’s been good to see everybody — even people I didn’t know from high school. We all have something invested here; we’re all neighbors.”

Although this community has spread out, and not everyone lives in the Central District anymore, this gathering was a reminder of the people who once comprised this neighborhood and the celebration of Garfield as a symbol of community, collaboration, and culture.