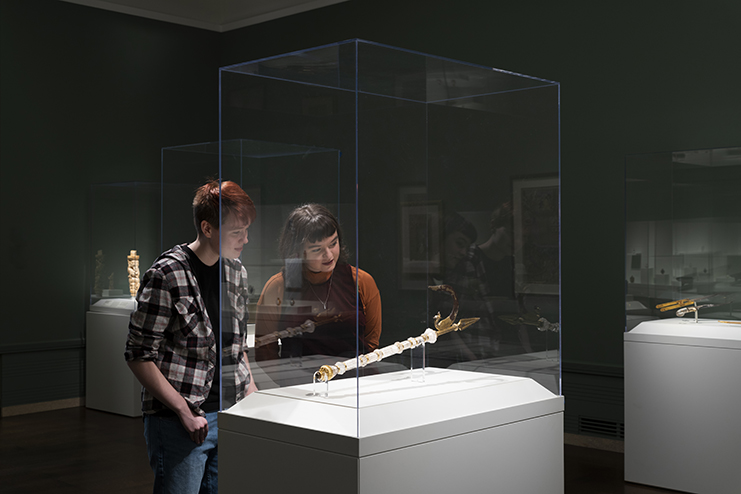 “We’re glad to be moving back to the Asian Art Museum and having better facilities there,” Loudon said.

The new Asian Art Museum will include a dedicated arts studio, an improved auditorium, and facilities for the hearing-impaired. There will also be better lighting in the building, which will enhance programming, Loudon said.

The Gardner Center will continue its Saturday University lectures, in partnership with Elliott Bay Book Company and the University of Washington Jackson School of International Studies, which invite experts on topics related to Asia to present lecture series on Saturday mornings. Once the museum is re-opened, many of them will take place there.

An upcoming lecture series in February, titled “What is Precious?” will examine how this question is answered in cultures across Asia. This will tie into a new gallery on this theme, which features wood arts from Japan, a material historically seen as precious. A speaker will talk about ephemeral precious goods in Sultanate India, such as scents.

The themed approach reflects the new structure of galleries in the museum, which will no longer group objects by culture, but according to themes and ideas, and fits well with the Saturday University lectures. “It makes it an exciting mix, I think,” said Loudon.

The Gardner Center will also present monthly art workshops for adults in the new arts studio in the museum. These will take place on first Thursdays between May and September, and will be free for the first year.

The first workshop, in May, will be facilitated by artist Juliet Shen, whose work is informed by the waterways in the Northwest: the Duwamish River, and along the Olympic Peninsula, and Willapa Bay. Shen will present her techniques for ink painting and give workshop participants a chance to try it themselves.

The Gardner Center will also host regular performances of music and theater. On March 22, the Eurasia Consort, which is dedicated to music from the Silk Road, will perform The Wind in the Pines.

In the summer, the Gardner Center will host free outdoor performances at the Asian Art Museum in Volunteer Park.

In the first two years after its re-opening, Loudon hopes the Gardner Center will present special programming on the art of Iran and Southeast Asia. Art from these regions, less often highlighted in Asian art collections in the Northwest, will have a greater presence in the new museum.