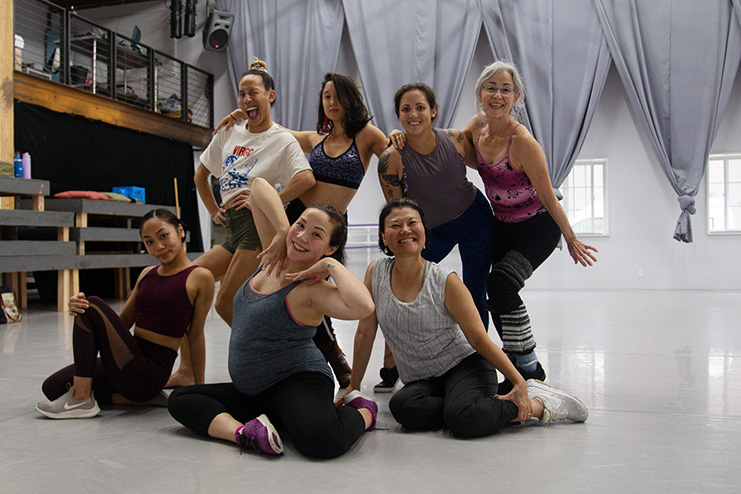 By day, Gabrielle Kazuko Nomura Gainor promotes other artists through her communications and public engagement work with Seattle Opera, and in her off time, Gainor flexes her own artistic muscles in the field of dance. Originally trained in ballet as a child, she has expanded her skill and experience more broadly in the performing arts.

Next up, Gainor will present work as a choreographer with Continuum Dance Project. “Continuum Dance Project is a Seattle-based company founded by two dancers whom I have collaborated with for several years, Amber Jackson and Hailey Bortel,” Gainor said. “These women are friends of mine and danced in a group I helped create called Relay Dance Collective.”

Gainor’s tie to Bortel goes even deeper. “Hailey Bortel worked for me on my piece Farewell Shikata ga nai, which toured four local schools in May 2018, made possible with grants from the Washington State Arts Commission and the Japanese American Citizens League,” Gainor said. “Farewell was inspired by the World War II Japanese American incarceration experience and the consequent intergenerational trauma that exists because of that incident today.”

Gainor continues her exploration of history, in alignment with Continuum Dance Project’s theme of heritage and empowerment, with her new dance piece entitled To the API women who made us, with love. “It’s an intergenerational cast of seven API dancers whose ages range from 22 to 63,” she said. “The dancers are Japanese, Filipina, Vietnamese, and/or multiracial.”

Diversity has been a focus for Gainor in her choreography for some time. “In my recent projects, I have been working exclusively with API folks, from kids to people in their 60s, and not all classically-trained dancers,” she said. “I believe this range of performers enriches what I put on the stage.”

She emphasizes commitment over traditional technical skill. “I prefer to work with folks who are passionate about being involved in the larger dialogue I’m trying to create,” she said. “Thus, I try to be accommodating and play to the unique strengths of whomever is in the cast.”

The current ensemble reflects Gainor’s goals in the arts. “I want people in my own community to be able to see themselves in what I create,” she said. “The work is part dance, part storytelling, and 100 percent my cast honoring our matriarchs and fierce womxn we come from.”

To create the story for this piece, Gainor meditated on her Filipina grandmother and Japanese great-grandmother, but she also involved her dancers in the creation of this piece. “During this recent process, I asked the dancers to reflect on women in their family,” she said. “I asked them to pick someone specific, and to write to me about her. Using my dancers’ words, I created a loose script of dialogue that we will be speaking in the piece.”

Gainor’s dancers will perform against an audio background hailing the strength of women. “My piece is set to a score of Beyoncé’s ‘Who Run the World (Girls)’ interspersed with two other audio tracks,” she said, “a recording of a poem by Troy Osaki about his Japanese American grandmother, ‘Morning Service,’ and an NPR Story Corps interview between a Vietnamese immigrant mother and her American-born daughter.”

This creative work rejuvenates Gainor in the face of the challenges of traditional arts institutions. “I love the arts, but they can also be draining,” she said. “My work within the Asian American community has often been a source of refuge from these historically white spaces.”

Gainor is interested in reclaiming these art forms from the dominant culture. “So many of the classic stories still performed in the U.S., whether at the ballet, opera, or in theater, have been used to put People of Color in their place through mocking caricatures, fetishization, blackface, brownface, and yellowface, stories that reinforce the idea that we will never be good enough, because we will never be White,” she said. “But People of Color deserve the dignity of feeling seen and represented.”

She strives to infuse her communications and public engagement work with this basic conviction, as well. “Last winter, I was interviewed on KUOW regarding Asian stereotypes in The Nutcracker ballet,” she said. “I was proud to be able to share about my experience bringing cultural expertise to Seattle Opera during Madame Butterfly, in addition to my social justice work with the Japanese American Citizens League.”

While choreographing To the API women, Gainor is also preparing for another big production. “When I perform my piece with Continuum on October 4 and 5, I will be 28 weeks pregnant, just entering my third trimester,” she said. “It’s not lost on me that I am dancing to honor the women who came before me, while simultaneously carrying the next generation.” Her second daughter is due mid-December.