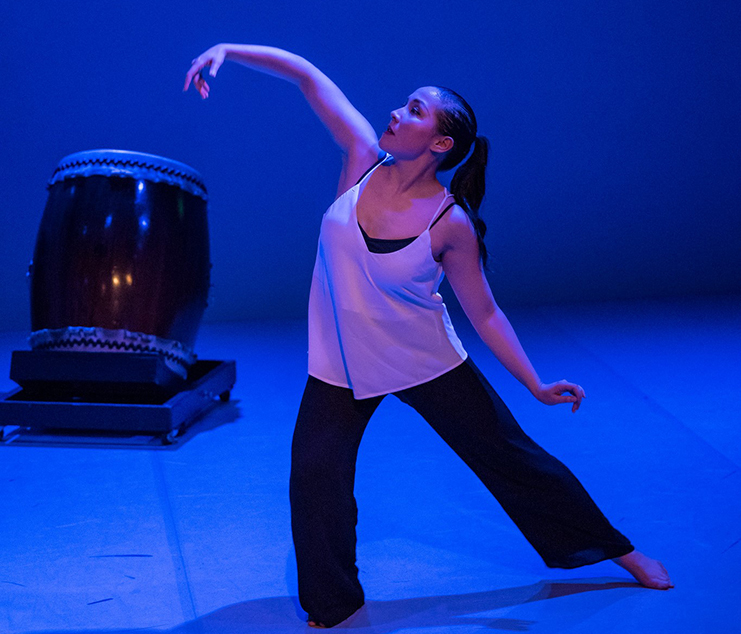 In 1973, the U.S. National Endowment for the Humanities created Humanities Washington, one of 55 total state and territorial humanities councils throughout the United States. In turn, in 2017, Humanities Washington launched a new statewide cultural heritage and traditional arts program called the Center for Washington Cultural Traditions, which is the home for the annual Heritage Arts Apprenticeship Program (HAAP).

Every summer, HAAP announces its newest participants in a year-long master-apprentice program, and this summer, two of those participants are master teacher Kaya Yamazaki, Ph.D., and apprentice Gabrielle Nomura Gainor, who together will be focusing on the tradition of Kagura, a classical form of Japanese dance.

With her concern for her heritage, Yamazaki founded Japanese Dance World with the mission of keeping the art of traditional Japanese dance alive in its genuine essence. “In 2014, I talked to the priest of Tsubaki Grand Shrine of America, and asked if I could do a dance offering in seasonal ceremonies,” Yamazaki recalled. “I choreographed three Kagura dances especially for Tsubaki Grand Shrine of America, and I served as the shrine’s Kagura performer for six years until we had to cancel in-person ceremonies in 2020 due to the pandemic.”

Now Yamazaki is working directly with Gainor to conserve the Kagura tradition. “I have admired Kaya’s work ever since I was a child,” Gainor said. “As a young Asian American student in a predominantly white, Eurocentric ballet world, I was always thrilled to see anyone in dance who made me feel less alone.”

Gainor describes how Yamazaki showed her a way to blend her various identities. “To fit into the world of ballet or modern dance, I often felt like my identity as a dancer had to be separate from my identity as an Asian American woman,” Gainor said. “But here was Kaya, a woman who was taking up space and being herself. She opened my mind to new possibilities.”

And Yamazaki is doing so again, through the study of Kagura. “I have wanted to study classical Japanese dance with Kaya for many years, but the timing never worked out, particularly with her being located on the Kitsap Peninsula and me being in the Seattle area,” Gainor said. “As a dancer, I feel called to do work that is less focused on providing entertainment, on being performative, and more interested in using creative expression as a means of connecting to my community and helping it to flourish.”

So, even though they had been out of contact for years, Gainor emailed Yamazaki, who was immediately interested. “Gabrielle’s self-discipline, hard work, and dedication to the art of dance have always impressed me,” Yamazaki said.“These are qualities I consider indispensable in pursuing dance or any art form.”

The pair got to work developing their application to HAAP. “Although Kagura and Japanese dance are new to Gabrielle, her extensive experience in dance is a valuable asset in learning any style of dance,” Yamazaki said. “I see a huge potential in Gabrielle in becoming a next-generation master Kagura artist, tradition bearer, and cultural keeper of our community.”

According to Yamazaki, Kagura has its roots in literal illumination. “The origin of Kagura dates back to time immemorial, when Ame-no-Uzume, the goddess of dawn and merriment, performed the first Kagura,” Yamazaki said. “According to the oldest Japanese epic, the sun goddess Amaterasu, furious at her brother’s violent deeds, hid in a cave, and the world became dark. Ame-no-Uzume danced at the cave entrance and coaxed out Amaterasu, restoring light to the earth.”

Gainor has never previously studied Japanese classical dance, so Yamazaki is starting with the basics via Zoom. “As a Japanese American, I grew up doing casual folk dances (Bon Odori) every summer at our Buddhist festival—but this is not the same thing as Kagura,” Gainor said. “I am enjoying the challenge of learning a movement style that is new to my body, including the incorporation of dance objects (fans) and garments (yukata, obi, and tabi) that are new to me.”

As the apprentice, Gainor appreciates the mutual respect that flows between the two dancers. “Even over Zoom, Kazuko creates an environment of welcome where I am able to show up fully as myself,” Gainor described, “as a person whose connection to being Japanese, and Asian more broadly, as I am also Filipina, has been imperiled by racism, assimilationist pressure, my elders’ wartime incarceration, and the message that my own Mixed Race body is somehow not fully worthy, especially in white spaces, and also in Japanese spaces.”

As part of this training, Yamazaki has three main goals ahead of the free Spring, 2022, event in which all HAAP participants engage: First, she plans to train Gainor to perform Kagura for all the seasonal ceremonies with ease and confidence. She will also ensure that Gainor knows basic shrine etiquette, including ritually washing hands and mouth at the entrance, bowing before entering the shrine building, and not standing or sitting with their back towards the altar. And finally, her goals will be met if Gainor can also perform Tamagushi Hairei, the offering of a sacred sakaki branch.

Gainor is ready to reclaim this heritage. “Even prior to World War II, assimilationist pressure and xenophobia caused people such as my great-grandfather’s family to convert to Christianity and abandon certain aspects of their Japanese identity,” she said. “Then, during World War II, some in my community burned their traditional Japanese dolls or garments, and some believed that total assimilation into white America was what was needed to survive. Parents stopped speaking to their children in Japanese. Our Japanese-ness was what betrayed us, after all.”

But now, as a fifth-generation Japanese American, Gainor believes that injustices from history are not simply meant to remain unaddressed, and she asserts that history can be grappled with. “Narratives can be reclaimed,” she said. “The Tsubaki Grand Shrine says that through the practice of Shinto, ‘our human lives, received from Great Nature and our ancestors, are essentially good.’ And, while obscuring energies exist, through the practices within Shinto, ‘we can prevent misfortune or move towards solution if misfortune has already occurred.’”

Gainor joins Yamazaki and almost 8,000 Tsubaki Grand Shrine members and online followers as she moves forward through at least 100 hours of dedicated teaching and apprenticeship time with her dedicated teacher, ahead of their culminating public event. Watch the Humanities Washington calendar for event scheduling.