In the past three decades, Japanese designers turned these and other challenging ideas into real clothes. Designers like Rei Kawakubo and Yohji Yamamoto questioned the concept of beauty and invented a radical new aesthetic, a departure from both European and Asian ideas of fashion, subtly infused with Japanese cultural themes. Their innovative designs had an immediate global impact. “Future Beauty: 30 Years of Japanese Fashion,” now on view at the Seattle Art Museum (SAM), surveys this first generation of modern Japanese designers.

In the 1980s, Japan ascended as a world economic power and technological innovator. Japanese designers invaded Paris — fashion’s historic capital — armed with new confidence and fresh ideas. Although the designers represented in “Future Beauty” are Japanese, their work is a dialogue between East and West. Many of the garments were first shown in Paris and sold internationally. Videos of their fashion shows show mostly Caucasian models. These videos, plus photographs and film, provide context for more than 100 garments drawn from the collection of the Kyoto Costume Institute, a museum in Japan founded to document Western clothing and its influence in the country.The show is organized around four themes. “In Praise of Shadows” is a survey in black and white of what were then radical ideas in clothing construction: asymmetrical garments; garments shaped like abstract sculptures, moving with rather than hugging the body; fabrics of wildly varied weights and textures juxtaposed in the same garment; exposed seams with raw unfinished edges; fabrics cut and sewn together in a random collage — the pieces bearing little relationship to the shape of the garment as a whole.

Although new fashions feel spontaneous and of-the-moment, they are almost always inspired by something that came before. “Flatness” contains some of the most inventive fabric structures in the show, based on ancient art forms: origami paper folding and the kimono, a flat garment constructed of rectangles. Issey Miyake’s lantern-like dresses have permanent pleat lines; they fold into origami-like constructions when not being worn. Several of Rei Kawakubo’s designs are displayed on models and in Naoka Kateyama’s large format photographs where they are folded flat like kimono, creating beautiful geometric compositions. Some of the most fun pieces are honeycomb structures by Hiroaki Ohya and Junya Watanabe. Each of Ohya’s garments folds into a rectangular book; a boxed set makes an outfit. Watanabe’s brightly colored sheer organza jacket and skirt appear nearly weightless in spite of their volume.

Japan became an industrial power by developing new materials and manufacturing processes. “Innovation and Tradition” features outfits that make use of technological innovations or refer to traditional materials and aesthetics — or sometimes both. Taro Horiuchi’s seemingly simple ensemble of a plain white shift with sheer overdress employs high tech fabrics: polyester laminated with washi paper for the dress, polyester and stainless steel organza for the overdress. Kosuke Tsumura’s “Final Home” is a clear plastic coat whose quilt-like compartments can be filled with insulation for comfort or survival, or objects that express personal identity or will be useful in an emergency. 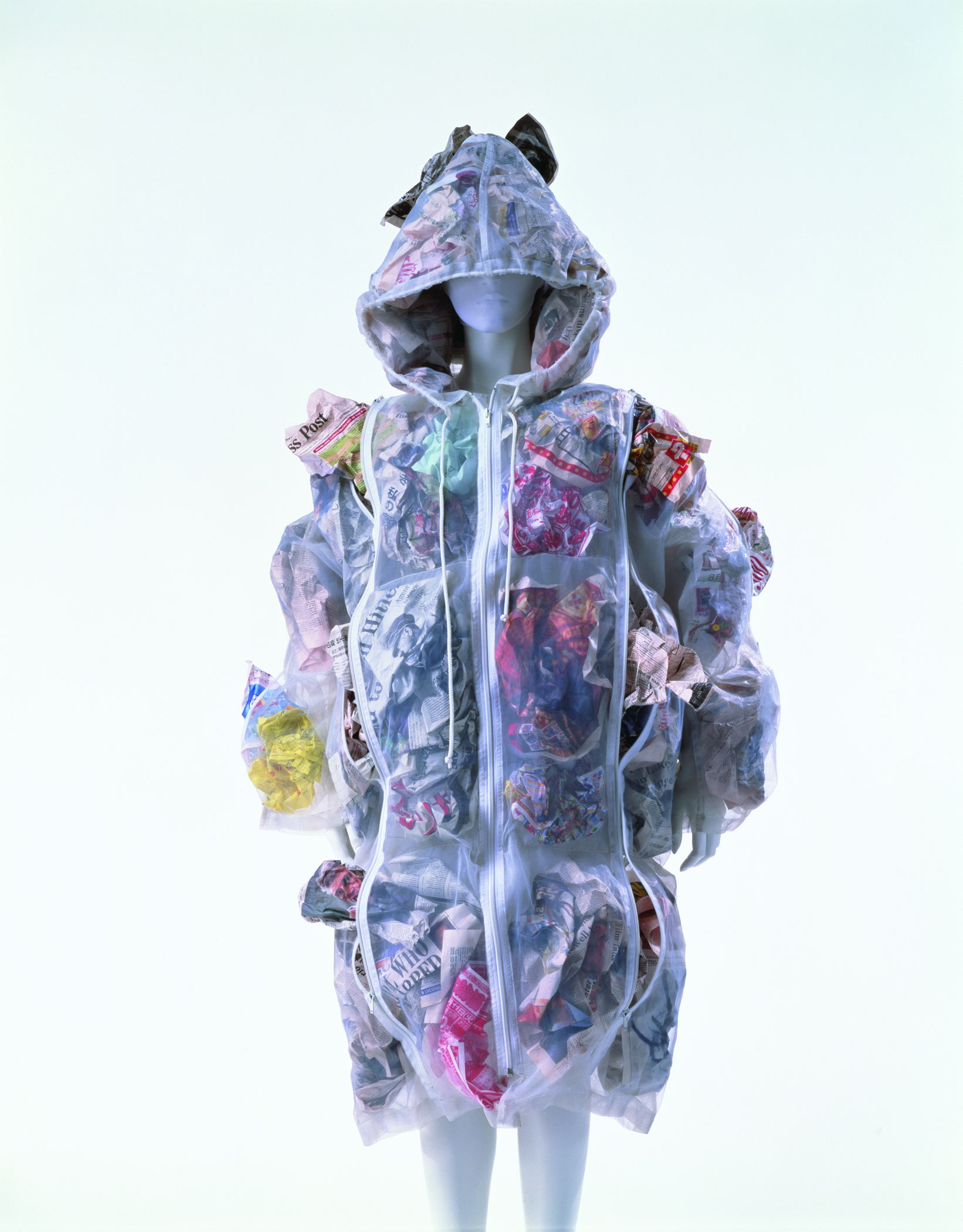 “Cool Japan” is a survey of street fashion. While Japanese youth participated in a global community whose fashion influences included punk and goth, artistic movements such as manga and anime emanated from Japan outward. Art intersects fashion in a cape, vest and boots by Naoki Takizawa in print fabric by Aya Takano, both members of artist Takashi Murakami’s collective, Kaikai Kiki. This section of the exhibition is an opportunity to see the work of several young designers less known in U.S.

“Future Beauty” finishes with mini-retrospectives of five designers who formed the creative vanguard of Japanese fashion: Issey Miyake, Yohji Yamamoto, Rei Kawakubo, Jun Takahashi and Junya Watanabe. All have pieces throughout the show, but these collections offer a perspective on the individual designers’ contributions and the evolution of their work over 30 years. Cutting-edge fashion often seems more concerned with concept than wearability and some of these pieces fit that stereotype. They were never mainstream, although many of the ideas they express about shape, construction, and material have been adopted by the mainstream.

In fashion, last season is history, yet the garments on display look surprisingly fresh. A video of American and European fashion shows from the 1980’s is included for historical context; viewers smirk at the obviously dated styles. Truly inventive designs and intellectually challenging ideas will continue to intrigue us. “Future Beauty” addresses the past and the future, beauty and contradiction, Japan and the world.

Valerie Steele, Director and Chief Curator of the Museum at the Fashion Institute of Technology discusses the Japanese fashion revolution of the 1980s on Friday, July 19 at 7 p.m. in the Plestcheeff Auditorium at SAM. Information and advance tickets to the exhibition and lecture at www.SeattleArtMuseum.org.