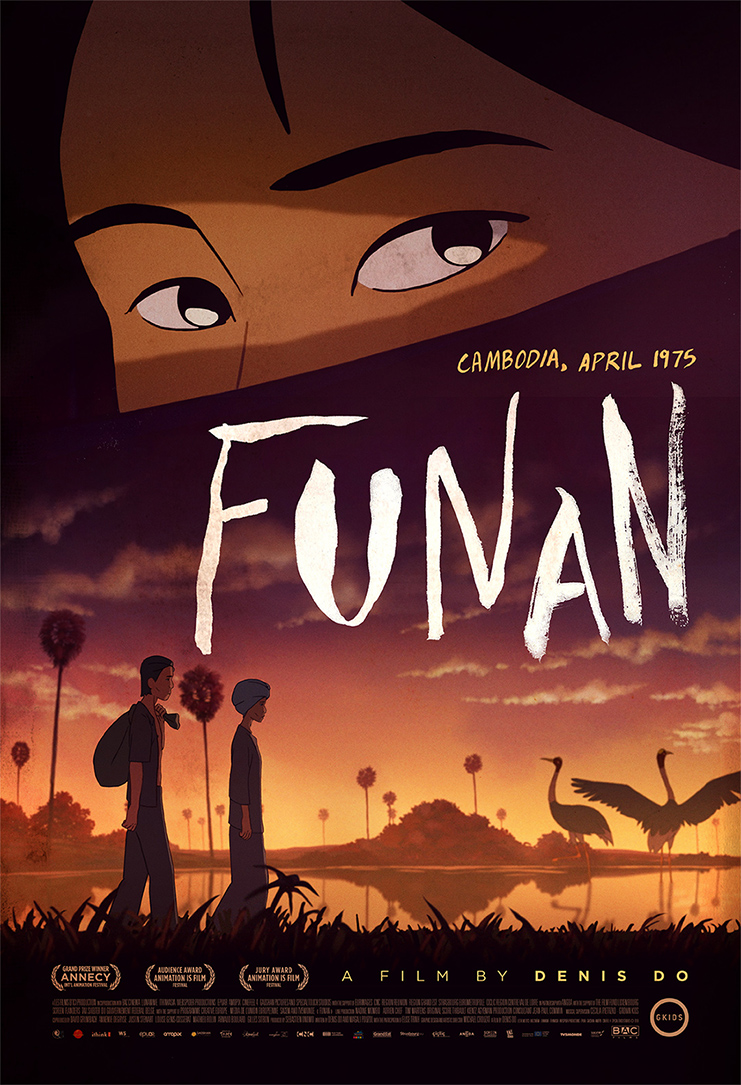 Funan, Denis Do’s directorial debut, is a feature-length animated movie based on the experiences of his mother and older brother when they were separated during the Khmer Rouge. This regime was responsible for wiping out nearly 2 million people in Cambodia through starvation, backbreaking labor and violence from 1975 to 1979. Funan – a reference to an ancient state in Cambodia that rose to prominence around 1 AD that covered parts of present-day Vietnam, Thailand and Cambodia – will show at The Grand Cinema in Tacoma on July 2 and the Grand Illusion Cinema on July 6.

Winner of the Cristal Award for Best Feature Film at the Annecy International Film Festival in France, Funan immediately made me think of Isao Takahata’s Grave of the Fireflies. Instead of focusing on the big picture, both movies observe and experience the limitations of humanity through the eyes of two main characters as they struggle to survive under extreme and harsh conditions that were, in some way or another, imposed on them. The films both note the surprising shifts in character that occur as people are pushed beyond their means, occupy different roles, and are reduced to basic survival mode. Somber and heartbreaking, both are animated with a mature audience in mind.

Although the Khmer Rouge may seem like a prodigious undertaking for a rookie filmmaker, Do was well-equipped to tackle the subject matter and the project’s challenges. A budding artist since the age of two, he is a graduate of the prestigious Paris art school Gobelins, which has a world-renowned animation department. Do has the skills and expertise to take on the subject matter visually. As for the narrative content, Do had collected a wealth of stories from his family and through his research since he was 12.

Pursuing the Khmer Rouge: A journey to self-acceptance

Like many second generation children of immigrant parents, Do has had a complicated relationship with his identity. Unlike most, he has three backgrounds to contend with: Chinese, Cambodian and French. His grandparents had escaped to Cambodia from China during the Japanese occupation, and his mother escaped Cambodia after the Khmer Rouge, eventually landing in France where Do was born and raised.

His introduction to the Khmer Rouge started at the age of three or four, when his mother saw him with a plate of unfinished food.

“You have to respect all the victims of the Khmer Rouge,” she admonished. “Because before, we had nothing to eat.”

His interest in Cambodia came to a standstill when he got his first exposure to the country at the age of 10. Shocked by Cambodia’s poverty and the visible scars left over from the regime, he rejected and distanced himself from Cambodia, saying in an interview with InCinemas.sg that “it was not possible for me to accept that I was related to Cambodia.”

Two years later, on another visit to the country, Do’s mother panicked during a coup in July and escaped with her children to Vietnam. This reaction motivated him to research Cambodia’s history. As he combined this knowledge with the family testimonies he had accumulated, he felt a responsibility and desire to share these stories. During his last year at Gobelins, a classmate suggested he make a movie out of the stories, cementing his resolve to go forward with the project.

“I think [the movie] in some way allowed me to connect back with those Cambodian roots I used to hate before,” he said in an interview with Deadline Hollywood. “I could tell that through my mother’s testimonies, her stories, I loved Cambodia again. It was also a kind of therapy for me. I didn’t feel any pain making this film; the film was closer to some kind of release. It was really personal, really intimate. I was really dedicated to these stories.”

From the outset, Do was constrained by the small budget he had. One of the things Do decided to do with his limited budget was to focus less on action, putting more emphasis on ambiance, composition and facial expressions. He wanted to avoid voyeurism and the glorification of violence. He was keen on creating a profound film that respected the memory of the victims. Because of this, violence is usually just suggested or done offscreen.

Do’s goal was to ignite people’s interest in Cambodia. He decided the best way to do this was to aim for their empathy. He knew he would not accomplish his goal by giving a historical analysis of the Khmer Rouge, so he focused on emotions. His story revolves around one family unit, whose members seem to represent the different choices or fates people were given at that time. He also shows humanizing aspects of the Khmer Rouge by allowing a few to express feelings of guilt, fear, compassion and helplessness.

“The most important thing is what happens to this family,” he says in an interview with Animation World Network. “What they are experiencing and how everyone can turn into someone else. Even the Khmer Rouge. Everyone is treated at the same level. People can stick together as a family, but at the end, in order to survive, many psychologies can change. That’s why I like to say that the film depicts humans rather than any one ethnic group of people.”

Returning to his roots and bringing the story full circle

Do’s production team spanned across four countries in six different studios, one of them being in Cambodia. It was important for Do to bring the story back to its source, but he had to overcome one challenge: Cambodia did not have an animation industry.

Luckily for Do, one of his previous classmates wanted to work in Cambodia and got him in touch with Justin Stewart, the CEO of a studio called Ithinkasia. Stewart proved vital to Do’s vision since he managed to find enough funding in Cambodia to hire his classmate and a team of Cambodians. The Cambodians had no experience and had to be trained from scratch.

“I was really happy because even if this film is based on the testimonies of my mom, it’s also the story of every Cambodian,” he says in an interview with Cartoon Brew. “It was really touching for me because I was born in France, and through this project, I was able to connect with young artists in Cambodia. That’s really meaningful for me.”

As I watched this movie, I was reminded of stories I had read in college about concentration camps that were part of the Holocaust. In the movie, the captives had been evacuated from Phnom Penh and distributed among various agricultural communes that amounted more or less to labor and re-education camps. Although these people were labelled as citizens contributing to the communal good, they were actually slave laborers and prisoners who were killed and tortured, often indiscriminately. Food was sparse. If they didn’t die from violence, they most likely succumbed to disease, starvation and malnutrition.

As the prisoners struggled to survive, their moral aptitude became skewed to conform to the harsh reality that was their existence. Their dignities stripped, their bodies became shells of their former selves.

Although this is a work of fiction, it is important to note that many of the stories in the movie are based on real stories that Do had collected, many from his own family, making these stories all the more crushing and poignant. Although the stories are bleak and somber, they are not depressing, but instead powerful. By keeping the violence at bay, Do manages to emphasize the most human aspects of these experiences, which will resonate with audiences. The haunting score effectively enunciates the emotions experienced by the characters and accurately portrays the ambiance.

The film is a reminder to all how human intellect can end up being man’s own worst enemy. It is also a reminder to those of us living in peaceful and developed societies that we will never truly know what kind of people we are until we are forced to survive in extreme situations that test our limits.

A compelling film that proves once again that animation can be used for serious storytelling, Funan invites audiences to learn more about Cambodia through this deeply personal story about a family’s survival through one atrocity in modern human history.

Check the websites of the The Grand Cinema and Grand Illusion Cinema for showtimes.