The existence of nuclear weapons and the increasing industrial use of nuclear power present mankind with the threat of massive destruction, not only of the natural environment but of man himself. The bilingual publication of Reverberations from Fukushima: 50 Japanese Poets Speak Out, edited by Leah Stenson and Asao Sarukawa Aroldi, brings us the voices of those poets who foresaw the catastrophes inherent in nuclear power and those who saw the mistakes of history repeated in Fukushima. This publication revisits that tragedy and can be viewed as a warning to the American people of the dangers of nuclear power.

It is the poets of Japan who use language and the power of imagination to restore a sense of reality to the cataclysmic events of March 11, 2011 when a major earthquake and tsunami hit Japan’s east coast unleashing the horror and ongoing tragedy of Fukushima. As happens so often, Fukushima has since dropped off the radar of the American people because the political debate has disappeared from the mass media and its impact is considered minimal for new nuclear power installations.

This anthology is a record of the human spirit speaking out for what is good and what is being lost as a result of the vanity and deception of government and business leaders. It is the poet who humanizes our world by putting a human face to the events that destroy people and Nature. The poets in this critical and remarkable anthology are in the company of poets, like Denise Levertov, whose activism acknowledged the ongoing paradox of human potential for good and for evil; the dream versus the reality.

There is a diversity of voices in this anthology that reflects on the displacement of nearly 150,000 people and the sorrows on the loss of home, family, animals, farms—what we hold dear. The style of writing is vernacular and direct, adhering to common speech, but more intense, briefer and accurate. The use of free verse as the form for these poems reveals their purpose: the content is serious; there is no confusion in the message to the reader’s mind and heart. Their straightforward style makes explanation of the poems unnecessary. The reader then responds to what is on the page and in the ear. This is plain-speaking poetry that everyman can read and respond to. 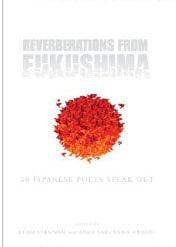 One is struck by the number of prophetic voices. Several of these poets are themselves contemporaries and/or survivors of the atomic bombing of Hiroshima and Nagasaki in World War II. Hiroyoshi Komatsu uses Einstein’s anguished cry of Oh weh! (Expressive of pain or despair)when he received the news that The atomic bomb, Little Boy, was dropped on Hiroshima at 15 minutes and 17 seconds past 9:00 a.m. on August 6, Tinian Time. [51]

The lead poem, “A Letter from the Shroud,” by Hisao Suzuki, is prophetic in its narrative about the whistle-blower on the cover-up of a 10-year-old crack in the Fukushima power plant. In just a few lines he bests the mass media types in reporting the lies and corruption in government and business. The poem ends in a lament for the future. [33]

Eiji Kuroha, in the poem, “If Man Snatches Fire,” warns man of his own extinction when one recalls the horrors of “Little Boy” on Hiroshima and “Fat Man” on Nagasaki, Chernobyl, Bikini, Three Mile Island, Kazakhstan, X, Y, and Z. [36-37]

Hiromi Mishou, also a survivor of World War II, is a physician as well as a poet, and in the poem, “What Should We Do?,” the physicians from Iraq ask how they can treat children with leukemia and children born with horrible congenital deformities as a result of the dumping of depleted uranium by U.S. forces. [49] This poem reminds us that modern warfare is aimed at the civilian population.

Other poets, though younger in age, also foresaw the dangers inherent in nuclear power, as in Kazunari Usuki’s “The Walls.” [35] Their poems, several of them published years prior to the March 2011 catastrophe, warn of escalating tragedy and sorrow and the implications of nuclear power for the future.

Rira Mizuki’s “The Ten Million Dollar Night View” is haunting in lines on our intoxication of technology’s gifts. [70]

Reading these poems, one may well ask “When will man ever learn?” as do a number of the poets, like Masumi Tanizaki in “Transition of a Myth,” citing the madness of Chernobyl, Iraq, Bikini, but offering some consolation and hope. [53] Poems like those in this collection warn us of the reckless fascination with technology that distorts human society. Tomomasa Sugimoto in “A Song for Tomorrow” urges us to abandon our overconfidence in this uncertain cage and instead embrace this earth we live on. [71]

Hatsuko Hara makes it personal when she considers her job at the Tokyo Electric Power Company and her decision to quit. [59-60] And Junko Kimura wants to see the pink petals of a cherry tree: Neither with radioactive snow, / nor with atomic rain, / but only with profusely falling petals. [83]

The shadow of death hangs heavy on everyone’s back from Koichi Omura’s poem reflects the anguish of the citizen who allows oneself to be deceived. [85] The poets in this anthology avoided the use of capital letters to scream their outrage but in the last stanza of “The Pollution of Our Ancestral Land,” Tsutomu Sakai does ask, What in the world / have you done? [63] Shizuka Kawana is another survivor of the atomic bombing of Japan in World War II. Kawana’s poem, “Like Tomatoes” is stark in its comparison of the burning of human flesh to that of tomatoes in the frying pan. [52]

The tragedy of Fukushima is ongoing and its effects will be manifested in the ill health of future generations. The effects on children and their families, including radiation in children, are a major concern of several poets in this anthology including Yasunari Kizuka, Shinsuke Kusaka, Hiromi Asayama, and Shinobu Komura. The poet, being the witness to these ongoing tragedies, speaks out for all of us, both living and those yet to be born.

Many of these poems are a cry for Nature. As long as Man has walked the earth, he has called on Nature to provide him with sustenance. Nature gives; we take; we destroy. It was Pope who wrote in his poem, “An Essay on Criticism,” First follow NATURE, and your Judgment frame / By her just Standard. We recognize that the mass media abrogates their responsibility in reporting the corruption of both government and business in the use of language to deceive, to depersonalize, to reduce nature and people to commodities. More than ever, we must heed the voices of the Japanese poets who speak out against the use of nuclear power for war and for increasing industrialization.

This American edition includes a preface by editor Leah Stenson and additional commentary by co-editor, Asao Sarukawa Aroldi. Hisao Suzuki and Jotaro Wakamatsu, editors of the original and full-length anthology, Farewell to Nuclear, Welcome to Renewable Energy: A Collection of Poems by 218 Poets, published by Coal Sack Publishing Company in 2012, added their commentary to this anthology. Also included are thoughtful essays by David Krieger, president of the Nuclear Age Peace Foundation; Francesca Giovannini, nuclear policy expert and affiliate to the Center for International Security and Cooperation at Stanford University and to the Belfer Center for Science and International Affairs at Harvard University.

When we consider the use of language in the post-modern age of technology with its sound bites, acronyms, text-speak, and corporate government-speak, the poetry in this anthology restores meaning to language, gives meaning to shared experiences and expands the human consciousness. The poets, as keen observers of humankind, are able to perceive our relationships with each other in the collective consciousness and with nature. These poets do not try for innovation in form or language but use language that asserts what is real in everyday life, in everyday things, what it is that we can feel and comprehend. The poets have made it clear to themselves and to their readers what is essential in questions of existence. Because the poems go beyond self-expression, this, I believe, makes them art.

Their poetry makes us stop to think and feel and moves us from the personal to the universal. If the welfare of people is the primary concern of a society, as written in any constitution or bill of rights, then we may well heed the warnings of those who have witnessed the wholesale destruction of their lands by nuclear war or by nuclear industrialization. The poets in this collection plea for a different vision of what a modern society should be. It is a world where everyone matters. The poets in Reverberations from Fukushima: 50 Japanese Poets Speak Out cry out for all of us to stop to think, to take heed and to protect Nature, thereby protecting Man. This book should be read by all who claim a spirit of humanity, those who want to see an end to nuclear weapons and nuclear power.

We all owe a huge note of thanks to the editors, Leah Stenson and Asao Sarukuwa Aroldi, and to Inkwater Press in Portland, Oregon and its marketing director, John Williams, for bringing this anthology to publication and to the attention of the public.