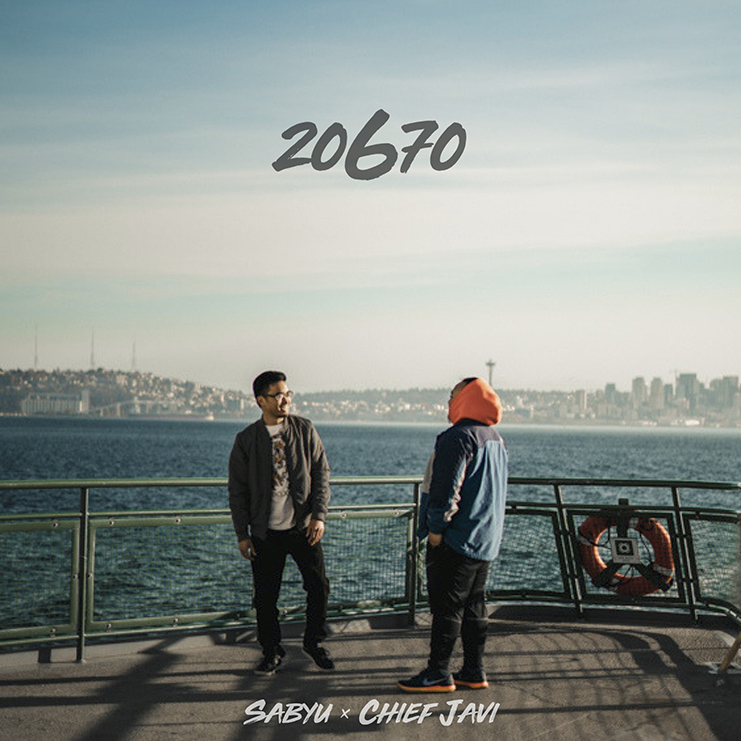 Hip hop musicians Sabyu and Chief Javi have teamed up to create a new album, 20670, that focuses on their immigrant experience relocating from Saipan to the Seattle area.
The album’s title is a combination of their current telephone area code, 206, and their former area code, 670, which serves an island in the Northern Mariana Islands, a U.S. commonwealth in the western Pacific Ocean.

Sabyu came to the U.S. mainland as a young teenager. “I see our album as storytelling,” he said. “I hope that our story resonates with people in the sense of leaving their motherland and finding a new home in an unfamiliar land.”

Similarly, Chief Javi moved with his family to Tukwila in 2004. “From the struggle of assimilating from Chamorro ways to American ways, to the blessings of what I have here compared to back home, the CD represents my 20670 story,” he said.

Both musicians became interested in creating music from an early age. “I’ve always been interested in making music,” Chief Javi said, “whether it was kanikapila with the boys and fam or music projects in school.”

Sabyu likewise began his music training while young. “I was drawn to the guitar and started taking lessons around 14 years old in Olympia, Washington,” he said. “I kept expanding my music vocabulary and picked up a bunch of other instruments like bass, drums, keys, and production.”

They both credit their cousins and brothers for introducing them to the hip hop style that has been their biggest inspiration. “I grew up with my older cousins who listened to nothing but Bone Thugs, shout-out the big bro Joe,” Chief Javi said. “Since then, hip-hop music and culture influenced who I am today.”

Sabyu agreed about the family contribution to his musical interests. “Growing up, I listened to a wide breadth of hip-hop so naturally it became part of my sound as a musician,” he said.

One aspect of hip-hop that they appreciate is its freedom and flexibility. “Hip-hop allows for a lot of individual expression whether it’s lyrics, dance, art or DJ’ing,” Sabyu said. “I’m still constantly learning and growing which is the beautiful part.”

Initially, their Sabyu and Chief Javi began to collaborate in an organic manner. “Our collabs started with us jamming randomly at UW, Sabyu playing guitar and Chief Javi freestyling,” Sabyu said. “We took a class together called Pacific Islander Film & Literature where we collaborated on a final project. We created a song called One Love Our Love and the rest is history.”

Both musicians are proud of their entire 20670 album, but different songs resonate differently for each of them. For Chief Javi, Biba Marianas is a song he values highly. “The Chamorro language is dying,” he said. “We created a song in Chamorro, about our culture, taking pride in our people. Shout-out to my grandma and grandpa for always playing Chamorro songs.”

For Sabyu, City of da Rain is especially moving. “It acknowledges the indigenous peoples of Seattle and surrounding areas, we rep The Town hard, and we have a dope feature by our che’lu (brother), Dakota Camacho,” Sabyu said. “I feel very proud of the production on this one too. I was able to channel my inner Jimi Hendrix.”

But this project hasn’t always been easy, and the pair cites the triple challenges of time, balance and space. “Time goes by way quicker than it seems, so deciding to create music versus working a 9-to-5 job allows us to pursue music as a career,” Sabyu said. “With balance, we are weighing schedules, music-making, family time, jobs, this, that, and the other in an effort to make the most of life as whole.”

The expansiveness of Washington state adds to these challenges. “If we had the space to focus solely on music,” Sabyu said, “we would be able to create more content and not have to worry about traveling from Seattle to Yelm, which is where the full home studio is.”

Despite these barriers, the duo is looking ahead and has more plans. “Our vision for live performance is us with a band, including drums, bass, guitar, sax, as well as Sabyu and Chief Javi on vocals,” Sabyu said. “We’re planning on a release party for our album in the near future!”