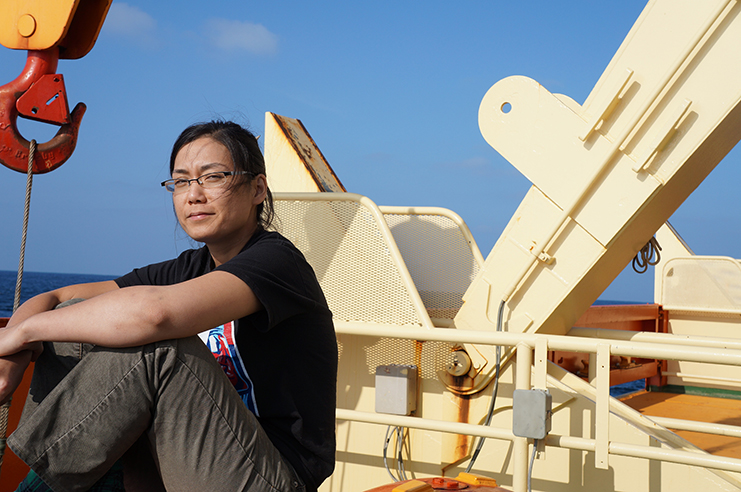 A decade after earning her Ph.D. in Oceanography from the University of Washington, Bonnie Chang continues to serve as a Research Scientist at UW’s Cooperative Institute for Climate, Ocean, and Ecosystem Studies. Her favorite element on the periodic table? Nitrogen.

Chang came to the ocean’s nitrogen by way of examining chemicals in the lab. “I studied inorganic chemistry in college and during the summers we were encouraged to find internships and work in labs to gain real-world experience,” Chang said. “But I was also interested in sailing and having fun adventures during the summer and so during my junior year in college, I applied for an internship in marine chemistry.”

The real-world application of her classroom learning made this internship memorable for Chang. “That summer I got to dig wells in the wide, sandy beaches of Delaware to investigate groundwater seepage and learn about its role in the ecosystem of Delaware Bay,” she said. “I became fascinated by the intersection of all the different disciplines in that one project – chemistry, biology, hydrology, geology – and then thinking about the impacts to the entire Bay and all its inhabitants.”

Chang received both personal and institutional support for this change of direction. “I’m a first-generation Chinese-American, so obviously my mom hoped I would become a doctor or a lawyer,” Chang said, “but she never batted an eye when I said I was going to go to graduate school to study oceanography.”

Undergirding it all was funding at the national level. “I was surprised to find out late in my senior year of college that the U.S. federal government supports the majority of graduate science education, across many scientific disciplines, not just oceanography, in the form of graduate student research assistantships which pay for students’ graduate school tuition and stipends for living expenses,” Chang said. “In exchange, graduate students carry out much of the lab and field work, data analysis, and writing up of research studies that are funded by the federal government at colleges and universities.”

So what is Chang’s fascination with nitrogen? “Nitrogen is necessary for life,” she said. “It is an important component in the proteins and DNA of all living organisms.”

It is also inescapable. “Nitrogen is all around us,” Chang said. “It makes up approximately 80% of the atmosphere, but nitrogen gas is not a form that is usable to most life.”

Chang explains the chemical nature of nitrogen: “Nitrogen gas is composed of two atoms of nitrogen triple-bonded to each other – a very strong bond – making it difficult to get a single atom of nitrogen to form a bond with a different atom to make a molecule of, say, protein,” she said. “High energy processes can break this triple bond in nitrogen gas. In the ocean, special algae use sunlight to break that triple bond and they, in turn, supply the rest of marine organisms – from microbes to corals to whales – with nitrogen in a form that they can use to build proteins and DNA and a whole host of organic compounds needed to sustain life.”

Nitrogen also has a significant impact on the carbon cycle and, therefore, on climate change. “You have probably heard about the impacts of one of the widely-discussed components of the carbon cycle, carbon dioxide, on climate, and so the amount of nitrogen that is available for marine life to use for growth impacts the carbon cycle,” Chang said. “Understanding all these linkages is important to predicting what can happen with our climate in the future.”

But studying the elements at sea doesn’t come without surprises, as Chang learned during a research cruise in the Arabian Sea in 2007. “The Arabian Sea is host to large regions of water that naturally do not contain any oxygen,” she described. “No fish or larger life can survive in those waters, but the absence of oxygen provides a niche for anaerobic microbes to carry out unique and biogeochemically important reactions – with nitrogen, of course.”

The surprise, however, didn’t arise from the water.  “We were just about to put a scientific instrument in the water when we noticed another ship coming towards us,” Chang reported. “As soon as I saw that ship turn to come alongside us, I realized that something was wrong and I, and the couple of other scientists on deck, ran inside, locking the doors behind us as we went.”

The scientists went straight to their assigned emergency station and awaited instructions. “Luckily, a U.S. research ship is much more maneuverable than a comparably-sized commercial ship and we were able to get away,” Chang said. “The truth is, we never did know what the intentions of the other ship were but, since we were in a region frequented by pirates, I’m fine that we didn’t find out.”

Chang’s work has also been affected by the COVID-19 pandemic, which has resulted in the cancellation of many research cruises, including one near South Africa for which Chang was scheduled in March, 2020. “We usually work in close quarters in ships and labs, so a lot of that type of work has been delayed or reorganized,” she said. “Since then I’ve been teleworking like so many others, a good time to catch up on data analysis and writing.”

But Chang hasn’t given up on her intended project, that of measuring dissolved nitrous oxide and chlorofluorocarbons (CFCs). “Both of these compounds are powerful greenhouse gases and play a significant role in the destruction of our ozone layer,” she said. “Nitrous oxide is produced by both natural and human processes; CFCs are completely human-made although their production and use are currently banned.”

Scientific curiosity is enticing Chang toward cold climates at both poles on earth’s axis. “We have relatively little data from the Arctic due to it being a very inhospitable place to work, difficult to access in the summer due its remoteness, and virtually impossible in the winter when the ice can make it impassable for even the strongest ice breaker, so what little information we have from the Arctic is all biased to the relatively warm, ice free summer months,” she said of the Arctic region near the North Pole. “In order to find out the whole story all year long, I have been working on an instrument that can be anchored under the ice where it can take measurements and samples throughout the winter, providing the first data of its kind during the Arctic winter.”

She also dreams of Antarctica at the earth’s southern Pole. “The uniquely stunning beauty and adventure of Antarctica are all great draws for me,” Chang said. “I’ve been across the Antarctic Circle on ships and have seen sea ice and ‘bergy bits, but I would like to stand in the shadow of those huge towering ice shelves that flow off of Antarctica, maybe walk on some of those ‘rivers’ of ancient glacial ice.”

But in Antarctica, Chang plans to look upward, as well. “In the summer months, the sun never sets or sets at such an oblique angle to the horizon that you see sunset and sunrise colors in the sky for hours,” she mused. “And if or when it does get dark, you have the chance to see the aurora australis.”

For now, Chang is practicing her skills here at home. “I’m also working on a project here in Hood Canal,” she said, “looking at how ocean acidification, which is a side effect of increasing carbon dioxide concentrations, might affect nitrogen cycling in the surface ocean which has impacts on the whole marine food web.”

The fast pace of science and the funding that drives it keep Chang focused on the near term. “Grants from the federal government, which funds the vast majority of oceanographic research, are mostly three to five years long, so that’s about as far in the future as I can plan.” Despite her passion for snowy icecaps, COVID-19 may ultimately next take Chang to warmer climates that don’t cross forbidden international borders, most likely to Puerto Rico or the U.S. Virgin Islands.

Regardless of location, though, Chang will continue to practice science that leads to discovery. “I’m interested by the creativity, or maybe ingenuity or insightfulness are better words,” she said, “that it takes to bring all the bits and pieces of evidence together to explain complex phenomena.”