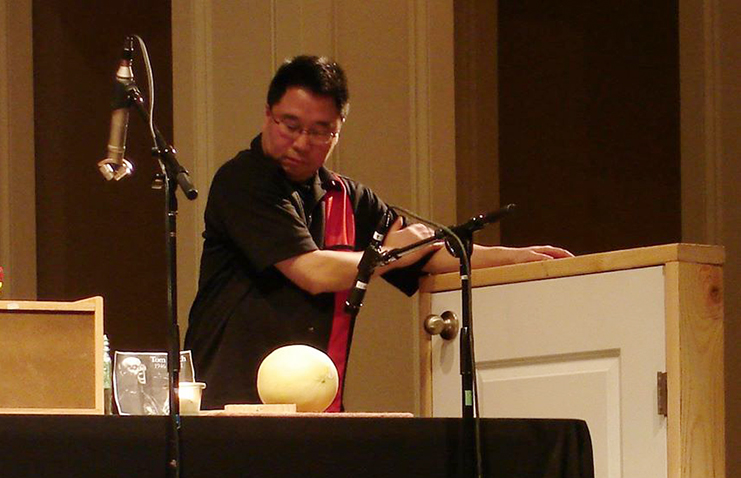 Curtis Takahashi deploys sound in order to tell stories and spark imaginations.  He has created sound effects for Imagination Theatre and Seattle Radio Theatre, and keeps his ears open for new audio material all throughout each day.

For Takahashi, the key to creating good sound effects is as basic as paying attention.  “I’ll listen to what’s happening around me and think of ways I can recreate the moment,” he said. “Sometimes I’ll even go home and try a few things.”

In addition to a workshop, Takahashi’s home can be a source of new ideas.  “I’ll be doing something, like, washing the dishes,” he said. “Something will clang or squeak that I add to the list of effects.”

Takahashi finds his work for Seattle Radio Theatre to be a highlight of his holiday season each year.  “I have the pleasure of working with a collection of local media personalities including the cast of Almost Live and KIRO Radio,” he said.  “These are performed live, on air, so I don’t have any room for mistakes.”

It’s the people that makes this work so rewarding.  “We have such a rich community of amazing artists,” Takahashi said. “I’m grateful that this gig has exposed me to this subculture.”

At Imagination Theatre, Takahashi works with a partner, Frank Rosin.  “I tend to footsteps and doors while he takes care of the tabletop gadgets,” Takahashi said.  “The advantage is that you’re able to run at a faster pace when scenes call for multiple effects at once.”

Teamwork also helps with brainstorming.  “Once in a while, it’ll take some time coming up with the right sound,” Takahashi said.  “I’ll scamper around the house looking for something, anything, that will produce the sound I’m looking for. I’ll often call Frank and we’ll work something out.”

There’s been no shortage of memorable moments in Takahashi’s sound effects career.  “I remember working with a director once who wanted me to stab a melon as one character met his demise,” he said.  “I tried to tell him that the effect wouldn’t work during the chaos of the scene. Sure enough, nobody could hear the sound.”

But a melon is tame compared to other sounds specified in some radio scripts that Takahashi has performed.  “I’ve had my share of odd sound requests,” he said. “One script called for squid tentacles and another for splattering brains.”

Takahashi has started to achieve some local fame, even occasionally being recognized in local grocery stores.  “One of my fondest memories was doing sound effects for a holiday script I wrote,” he said. “We performed A Christmas Peril up in Edmonds a few years back.”

Despite all his success in live radio theatre, Takahashi has dreams of expanding into other genres.  “I’d like to try creating sound effects for a film or video game one day,” he said.

Whatever the genre, creating sound effects has allowed Takahashi to work against the ubiquity of noise in our modern world. “This work has certainly raised my awareness of my surroundings,” Takahashi said. “Maybe it’s a Zen kind of thing.”