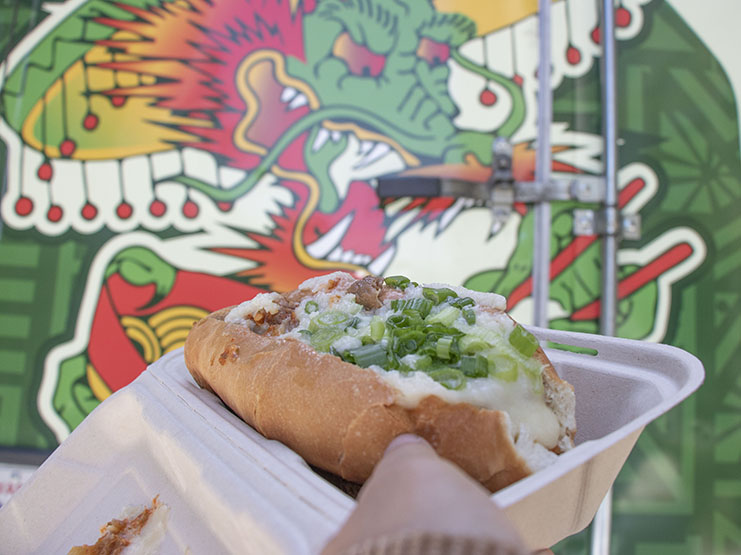 Those who know the food of Phorale know that it’s not your traditional food establishment. Cho, who created most of the recipes and dishes drew inspiration from Roy Choi – the famous chef slinging Korean BBQ tacos in Los Angeles.

“Growing up, my best friend and his family were from New Mexico, and a lot of the food they gave was Tex-Mex Mexican food. And so I think being a part of food, you start getting all these foods from different cultures, you start to kind of realize essentially what flavors and cuisines balance well with each other,” Cho says.

Their specialty and what might best represent this idea of Tex-Mex/Asian hybrid is their interpretation of a sub sandwich.

“Banh mi traditionally comes on a french bread, and in Mexico, they also have a bread that was made for the French people when they had occupied Mexico, just like Vietnam,” Cho explains. “Mexico’s rendition of the French baguette is called the bolillo, so we took that concept of the bread, we do the pickled vegetables just like a banh mi – carrots, daikon – and then the protein that we’d use is Korean influenced.”

The food business is not unfamiliar to Cho whose family owned a teriyaki joint on 4th and James when he was growing up. Most of their clientele consisted of the Seattle Police Department, with whom they shared the building.

Cho would spend his days as a child in the restaurant before he was old enough to go to school, and then when he was of school age, he’d still spend most of his time there to hang out.

“My parents went through the struggle of owning a small business and restaurant, and this next line is a little stereotypical – a little cliche – but essentially their reasoning was ‘we did the restaurant industry so that you could live a better life,’” Cho says.

After graduating from the UW in 2011, Cho, whose background is in finance, opened up his own business in South Park. This was per his parents’ wishes, straying from directly jumping into the food industry. But, as we know now, that wouldn’t last for long.

A friend of Cho and Bui’s agreed to lease them a section of his convenience store that they could run a small food operation out of.

The digs were small – unassuming to those passing by. They opened Phorale in a section of the South Park convenience store in 2016, slinging out bolillos filled with BBQ pork, pork egg rolls with salsa verde and fries topped with your choice of meat until they were forced to close in 2018 when the lease was up.

During the time between finding the new truck and their storefront’s closure, Cho ended up on the nationally televised cooking show, The Chew, on a cooking competition and was also the interim chef at a local community center in the South Park neighborhood. It was ultimately another friend who ended up helping find a new home for Phorale.

“My buddy Sean, who is the owner of Bao Time, he pretty much asked me if I could run the day to day operations for Bao Time while we were looking for a different spot,” Cho says. “After a few months on the Bao truck, I worked out a deal where I purchased a truck from him – a majority portion from him – and within two weeks, we had closed Bao Time, wrapped the truck, rebranded and were out again.”

Being mobile now allows Phorale to take their food to the masses who couldn’t or may not have considered venturing out South Park before. But their roots are still in the neighborhood where everything started.

When they were still open, Cho helped set up a program with the Department of Neighborhoods which allowed local kids to help out at the restaurant and get paid.

“We would do a food handlers permit class with them, then they would come and help out for 40 hours a month, and once they had their 40 hours, the Department of Neighborhoods would pay them $599,” Cho says.

Cho explained that they had noticed the kids in the neighborhood were largely unsupervised after school. He hoped that by providing this sort of work program early on in life they might be able to get an entry-level job since the path to college for many was out of the question.

In addition to this program, they hosted annual Thanksgiving dinners for the neighborhood partnering with groups like Food Lifeline.

“If we are making food and taking money we need to give back somehow,” Cho says simply.

As Cho points out, the South Park neighborhood is changing with new businesses starting to trickle into the neighborhood.

“I’m glad we were there for the beginning of it, and you know I still live in South Park,” Cho says. “We’re still trying to support the neighborhood, but we’re just trying to get in where we can fit in essentially right now.”

The truck debuted at the end of March, marking the reopening of Phorale with a celebration at Georgetown’s Bar Ciduad. People can find Phorale’s truck all over Seattle, right now mostly in South Lake Union and their old South Park neighborhood.

Cho reflects on the business and how he ended up where he is today, not only a chef but also a valued community member.