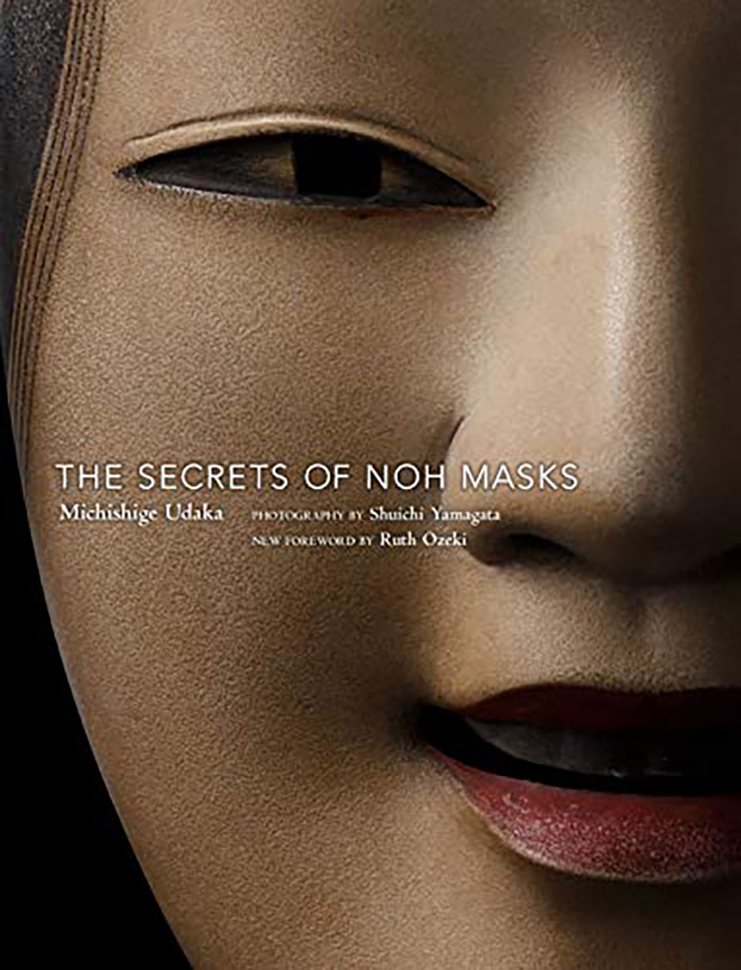 Artist and designer William Morris once asked, “What is an artist but a workman who is determined that, whatever else happens, his work shall be excellent?” Perhaps no nation embodies this principle more than Japan, a country renowned for its refined aesthetics and meticulous craftsmanship. Their arts and crafts have inspired a number of recent books, each inviting readers to peek into this diverse and colorful world.

Japan’s long-standing esteem for the union of artistry and technique is perhaps best illustrated by Noh, the traditional theatrical art form characterized by actors wearing colorful wooden masks. These hauntingly expressive creations take the spotlight in Michishige Udaka’s The Secrets of Noh Masks. Udaka, a maskmaker and Noh performer, opens with a brief history of Noh theater before moving on to a close examination of 32 of his favorite works: masks representing characters of all ages, both male and female, mortal and supernatural. The book’s highlight is photographer Shuichi Yamagata’s stunning full-page photographs of the masks bathed in shadowy half-light, a setting that captures not only the mastery of their craftsmanship, but also their uncanny ability to suggest disparate emotions based on their orientation. With equal emphasis on images and words, The Secrets of Noh Masks would make a striking addition to the coffee table as well as the bookshelf.

Another example of the early prominence of Japanese craftsmanship can be found in a singular and neglected form of folk art whose influence extends to the present day. Author Alan Scott Pate explores the surprisingly engaging story of the humble street sign in Kanban: Traditional Shop Signs of Japan. The vertical signs called kanban, which advertised shops and sought to entice customers, rose to prominence during the economic boom of the 17th century and were widely adopted as a fusion between art and commerce. Pate chronicles the signs’ history, manufacture, and symbology while accompanying photographs detail their intricate craftsmanship and creativity. The signs range in form from carved three-dimensional replicas of goods like keys and radishes to lacquer panels adorned with elegant calligraphy. As only a fraction of original kanban survive today, this volume is an important reference for an art form that once played an integral role in Japanese trade culture.

From the the shop signs of old Japan to the workplaces of today’s craftsmen, we turn to Manami Okazaki’s Takumi: Downtown Tokyo Artisan Culture. The most recent of journalist Okazaki’s many investigations into Japanese art and culture, Takumi gives readers a revealing look at artisans still producing handmade crafts on the streets of high-tech Tokyo. Comprised of interviews with furniture builders, lantern painters, chopstick makers and others, Okazaki allows the craftsmen to share their stories, explain the demands of their occupations, and articulate their views on the importance of handmade crafts in modern society. Several express their concerns for the future, with one indigo dyer soberly remarking, “Handmade things last a long time and have value. If there aren’t people who appreciate this any more, our job will disappear.” Including dozens of photographs of the artisans at work, Takumi is a persuasive testament to the importance of traditional craftsmanship.

Toy Tokyo, one of Okazaki’s earlier books, is also a celebration of a unique association of people. In this case, photographers who express themselves through the curious medium of the toy camera. In contrast to the ever-increasing advances of digital cameras, these simple, often handmade devices produce blurry, distorted images that can nevertheless appear more atmospheric, nostalgic, and personal than the results generated by their technologically superior cousins. In interviews with the photographers, Okazaki discusses personal backgrounds, artistic influences, and the challenges and possibilities afforded by the toy camera format. For their many differences, the artists are united in their enthusiasm for the niche medium, praising its expressive potential along with the thrill of working with a device prone to unpredictable results. As one photographer states, “It’s like a living thing, there are days the camera is in a bad mood.” Although several of the book’s photographs would have benefited from a larger image size, Toy Tokyo ably demonstrates the vibrancy of Japan’s contemporary artistic culture.

With a reputation for excellence stretching back centuries, Japan’s arts and crafts remain a rewarding subject for study, appreciation, and admiration. As these books introduce readers to the joys of the country’s creative past and present, more people can be inspired to ensure the arts remain vital into the 21st century and beyond.