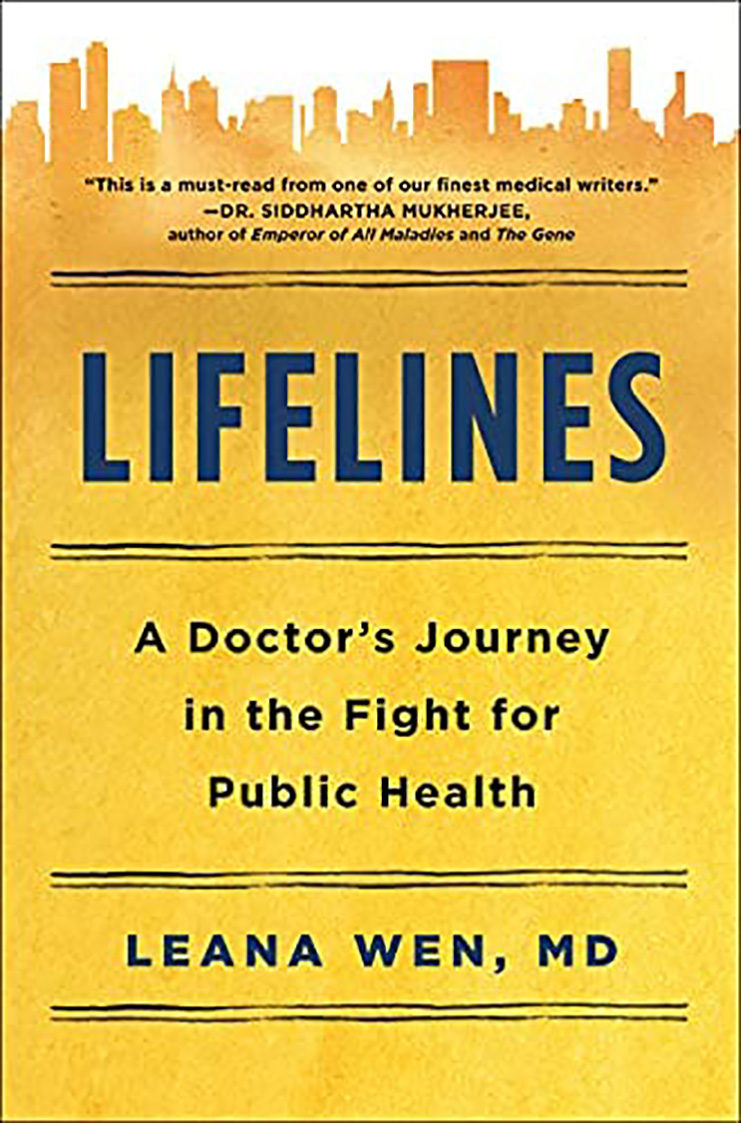 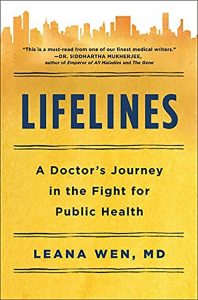 Amidst the resurgence of the COVID-19 pandemic, Dr. Leana Wen is too busy to talk to us, but she does have a lot to say in her new book, Lifelines: A Doctor’s Journey in the Fight for Public Health. In this memoir and advocacy for the importance of public health, Wen shares her journey toward becoming, first, an American citizen, then a doctor, and then a leader who aims to educate and motivate while also taking concrete actions to save lives.

Wen begins by sharing how, after her parents left their homeland China in order to give her better opportunities in the United States, her family worked hard but also learned the importance of public services. “I took part in a school lunch program and attended public schools from elementary school through college,” Wen wrote. “We had Medicaid and relied on reduced-cost clinics for our health care.”

Looking back, Wen recalls her mother avoiding these services whenever possible. “My parents certainly had no plans to depend on the government in perpetuity,” she recalled. “They were trying their best to make it on their own, and these programs ensured that our basic needs were met.”

Despite the endless labors of both her parents, Wen remembers facing overt harassment due to their Chinese ethnicity, as well as periods of time when the family was homeless. But the biggest fear that was imparted concerned their immigration status: “We knew of so many families who had become undocumented, and it prevented their work opportunities and limited their children’s educational potential,” Wen wrote.

Both ethnicity and immigration status combined to affect the health of people that Wen’s family knew, and this began to shape her ideas for her future. “Could I be that person who would care for everyone, especially those who had nowhere else to go?” she wondered. “Could I become a doctor, a healer, and work to change the reality of my neighbors and all those whom society cast aside?”

This book details exactly that journey. Wen studied hard and built relationships with valued mentors, but along the way, she also panhandled outside supermarkets to help her family pay the rent and was cautioned by her premed advisor to expect rejections from her medical school applications. “I wondered how many students could have become doctors if they had had the support to follow through with their original aspirations,” she wrote.

Once accepted, she detoured through a combined MD/PhD program in order to receive the tuition funding that she could not have afforded any other way. “In retrospect, this was not great reasoning to enter a PhD program,” Wen admitted, “but it was one that I’d see over and over again for students who came from less advantaged backgrounds: our educational and career choices were driven by financial considerations because they had to be.”

As she began to see patients during her studies, Wen was troubled by the financial limitations on good patient care – and she felt alone in these feelings. “There must have been other students in my class who were wrestling with these questions, but it was hard to find them,” Wen pondered. “Medicine is a conservative profession, and medical education is steeped in tradition and hierarchy.”

Wen found herself discouraged from advocacy or activism, and that even topics such as the affordability of health insurance or the benefits of universal healthcare were considered too political. “I was becoming more engaged by issues like this, not only because of my family’s experience with economic hardships,” she described, “but also because of a growing awareness that broader social change was necessary to fit my view of what medicine can and should accomplish.”

While attending an AMSA conference, Wen found an ideal mentor in Dr. Fitzhugh Mullan, a former assistant U.S. surgeon general whose book White Coat, Clenched Fist: The Political Education of an American Physician resonated with Wen’s desire to fight for her future patients. “I told Fitz that I wanted to grow up to be just like him,” Wen reminisced. “He agreed right there and then to my working with him.”

That launched a career in which Wen advocated for Americans with disabilities, served as an emergency room doctor, participated in a fellowship in Rwanda to care for women with HIV/AIDS, and co-wrote an initial book entitled When Doctors Don’t Listen: How to Avoid Misdiagnoses and Unnecessary Tests with Dr. Joshua Kosowsky.

Her advocacy for ordinary patients continued in her role as the Health Commissioner for the City of Baltimore. She initially utilized traditional metrics to serve as the “city’s doctor,” including life expectancy, infant mortality and overdose deaths, but after the death of Freddie Gray in police custody, Wen decided to focus on equity. “I thought it was time for us to call out racism as a public health issue,” she asserted in later chapters of Lifelines.

Initially, she received pushback. “People could see racial disparities as a public health issue,” she said. “But racism itself?”

But, in the face of ongoing civil unrest over Gray’s death, she kept up the pressure. “We could finally talk about how poverty, violence and racism are public health problems,” she wrote, “and that public health can be a powerful social justice tool to begin to address these long-standing issues.”

This emphasis brought her a new mentor and partner: Congressman Elijah Cummings. “When a federal grant stopped, threatening to end a home visiting program for mothers and babies, he stepped in,” Wen reported. “He would not take no for an answer. When we needed to secure funds for mental health and trauma, he fought for us and got us the resources.”

And then came the COVID-19 pandemic, and Wen spread her wings farther to advocate for the American public. “COVID-19 proved the case that those of us in the field have been making for so long, that every aspect of our lives is tied to public health,” she wrote.

She kept her eye on those least able to protect themselves from infection. “Without equity as a guiding force, status quo will reign, and the already gaping chasm of health disparities will widen even more,” Wen wrote. But she always maintained hope and a bias toward positive action: “Just as public health is the lens that magnifies and exposes long-standing disparities, it can also be a powerful tool to improve well-being for all.”

Wen worked to combat misinformation, participated personally in a vaccine trial, and spoke out in favor of science-based health guidelines. “As a country, we must create a future where public health is understood as the glue that holds all the other parts of society together,” she concludes in Lifelines. “It’s a field that can bridge some of the most challenging divides in our country to transcend partisanship and unite people in a shared vision of doing what’s right for all.” And, with COVID-19 cases rising, she encourages us to get to work.