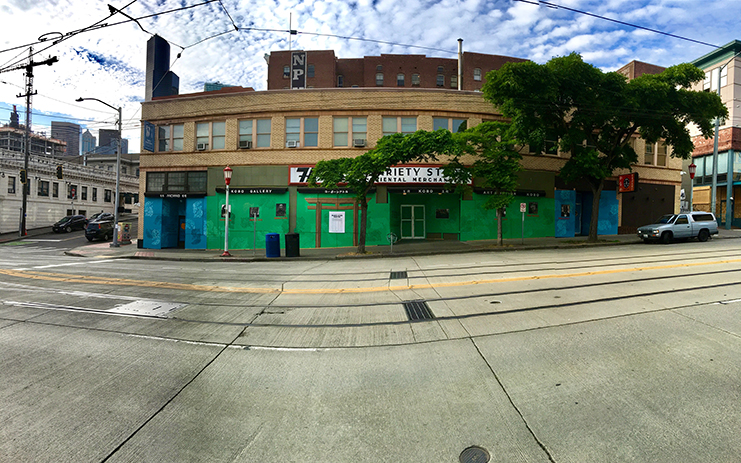 If you have walked by the Jackson Building in the Chinatown International District in the past few weeks, you may have noticed a mural depicting a solidarity message for the “Black Lives Matter” movement. It features portraits of eight slain community members including George Floyd, Breonna Taylor, and Ahmaud Arbery whose deaths launched massive protests for equality and racial justice across the country and around the world.

One of the artists behind the mural is Seattle resident, Erin Shigaki, who said in the process of this particular artwork going up on the building, which she worked on in collaboration with with artist Scott Méxcal, became a personal battle. One that has since gone public.

“It all started when I took a portion of the artwork to be printed at TCC Printing & Imaging,” said Shigaki. “Initially, the business took my order with no problem. But hours later, one of the techs called me and said the job was being pulled because his boss did not support Black Lives Matter. I couldn’t believe what I heard, and I was furious.”

Shigaki then sent an email relaying what happened to community leaders in the CID. That message quickly spread, and angry emails and posts made their way to Michael Crumpacker, owner and president of TCC Printing & Imaging, including on his business’s Yelp Page.

“I am not a racist and all this had nothing to do with race, not at all,” said Crumpacker. “The reason I pulled it at first is because I thought the artwork was going to incite more violence in the city and I didn’t want that. But when I went home that night and saw on the news that most of the protests were actually peaceful. I changed my mind and offered to take Ms. Shigaki’s work back. My only intention at the beginning was not to promote violence. It has nothing to do with Black people or BLM.”

One person who sent a personal email expressing his disappointment to Mr. Crumpacker is the Seattle’s chapter president for the Japanese American Citizens League, Stan Shikuma. Shikuma said he doesn’t know Mr. Crumpacker personally, but seeing that the printing business has been in the CID for many years, this incident should never have never happened in the first place.

“(Mr. Crumpacker) had a knee jerk reaction and apparently associated BLM with the disturbances in the city, and that’s a false association,” said Shikuma. “These kinds of actions affect us personally. For the Japanese American community, this whole idea that you could be stigmatized and punished for who you are, and not for what you have done, that resonates strongly given the history of this country. During the incarceration, Japanese people could not become citizens. We were vilified as enemies. We were sent to internment camps.”

Shikuma said his email to Mr. Crumpacker was intended to put him on notice that his action did not just concern one person, but the entire community. One that is already making a big change in support of BLM.

“This is a transformative time in our history,” said Shikuma. “We have BLM uprising around the world. Racism is now triggering a universal response by the broad sector of the nation. To create real change, we need to have a lot of people supporting the cause, and I think we are seeing it.”

For Crumpacker, he said he’s deeply sorry for what happened and if he could reverse his actions and call Shigaki before pulling the job, he would have. He said he did reach out to take her work back even before seeing any of the angry responses from the public. He also closed the doors to his business on Friday June 12th to answer the call to action made by Black Lives Matter Seattle-King County. Crumpacker has since also offered Shigaki $500 worth of free printing for the Black Lives Matter movement.

“I wish I had done things differently. I made a mess of things. I am not saying this now based on feedback but because I wish I hadn’t done it,”  said Crumpacker. “To say this was a learning experience is an understatement. We had never refused printing to anyone and this was a one-time incident that I wish I could take back. No one wants to be associated with being a racist unless you are a racist, and I am not one of them. I believe we are all created equal. I would call all this an unfortunate misunderstanding.”

Shigaki said she did end up sending her mural artwork to be printed at another business and she had no intention of hurting TCC Printing. But as a Japanese American, she knows it’s important to speak out and will continue to do so. She said her mural is meant to be a space of healing for the black community. The solidarity message on the artwork also takes the appearance of the exclusion order (E.O. 9066) which was plastered throughout the west coast Japanese American neighborhoods announcing their abrupt forced removal and indefinite incarceration.

“My wish is to reclaim this tyrannical document and convert into a message of hope. I also wish to remind the JA and API communities that because of their own struggles for humanity, we have a moral imperative to fight against white supremacy, organize in solidarity with and amplify the black community’s demands for equality.”

Shigaki also said she will reach out to her black colleagues to see if they wish to use the $500 printing credit offered by Mr. Crumpacker.

“(His) apology finally feels sincere,” said Shigaki. “What happened here does not overshadow the fact that we got the solidarity of the people in this community. I think the CID neighborhood is really rallying behind the black community. It’s a moral imperative to amplify the community. This is the only way it’s going to change. It’s us coming together.”