If you’ve ever traveled through Terminal B at the SeaTac airport, you’ve probably walked past the black and white mural running the back wall of the Starbucks. The person behind that mural is Japanese-American artist Shogo Ota, owner of the design company Tireman Studio.

Ota is an artist through and through. His studio looks like a purposeful explosion of his artwork, with previous poster designs and paint bottles lining a black-cube shelf against the wall, and a “portfolio shelf” stacked with Ota’s many design accomplishments. The prize object rests on a shelf to the left: the Starbucks “green cup” that Ota designed in 2016.

The “green cup” was meant to represent unity as the country divided over the 2016 presidential election. Much like the mural in SeaTac, Ota created a collage of diverse faces using one line.

The cup was released on November 1, 2016, when Ota was in New York for a design job. Walking to his destination, he was starstruck by the sheer amount of people holding coffee cups, with his design.

“Art can be spread like that, in one day,” Ota said. “It’s kind of a weird feeling.”

Ota’s journey to Starbucks design fame began at his alma mater, the University of Idaho. He immigrated from Japan at 18 to learn English, and originally majored in Business. But he didn’t really know what he wanted to do.

“One of my friends told me I look like a design artist, and I thought, ‘oh, that sounds cool,” Ota said.

And that’s true; with long black hair often pulled back into a bun, a shaggy but trim beard, and a hint of style, Ota had what it took to become a designer. Besides training in design, of course.

Ota decided to take a class in graphic design, and then another, and then another. He graduated with a Bachelor of Fine Arts and landed an internship at Modern Dog Design Co in Seattle. But he wanted more. After seven years at Modern Dog, Ota started his own design company in 2012: Tireman Studio.

Ota’s earliest memory of creating art was in an art class at the age of four or five. He sat in a semicircle of students, all drawing a red bicycle in the center of the room. Ota was disappointed with his first attempt, asked the teacher for more paper, and ended up being one of the last kids in the room. It’s only fitting that his design studio, decades later, was named, in part, for his love of bicycles.

In the past eight years, Tireman Studio has worked on a wide variety of projects. From murals and record covers to water bottles and, yes, bicycle art, Ota shines with versatility. When approached with a pitch for a project, Ota is most excited to work with clients on full company branding. Designing a whole restaurant, the Ma-Ono restaurant in West-Seattle, for example, means Ota can create a consistent look. The logo, menu, mural, cup design and, most importantly, fun neon signs, are all ready for Ota’s stroke of genius. He makes every piece work together like a cog in a gorgeous, contemporary design machine. 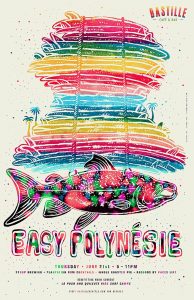 As a Japanese American artist, Ota sometimes uses Japanese patterns in his designs and enjoys painting in Japanese brush. However, like his art medium, his style comes in quite the variety.

“I like to mix cultures and styles to create my own art,” Ota said.

It’s been almost a decade since the creation of Tireman Studio, and the clientele base keeps getting bigger and bigger. Ota enjoys doing more “funkier projects,” like murals requiring him to paint on a ladder 40-feet high, and hopes to continue growing his name. One of his dream projects would be designing a Nike sneaker, but his main goal will always be to, “make my clients and customers happy.”

Visit https://www.tiremanstudio.com/ to see more of Shogo Ota’s work, and find him on Instagram @shogodzilla.