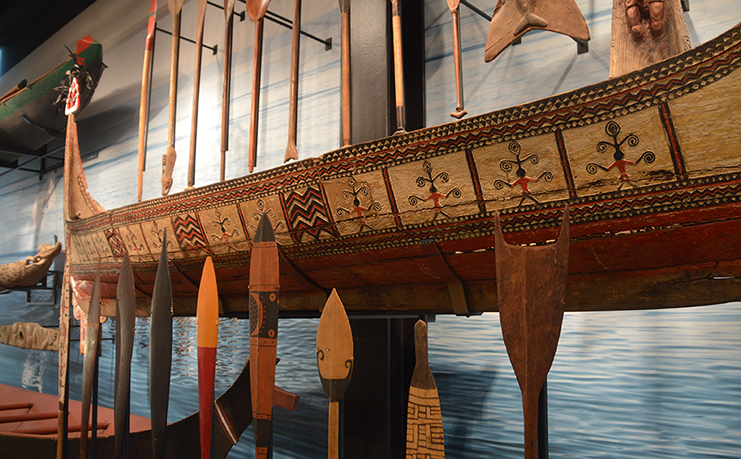 When the new Burke Museum opens to the public on October 12, coinciding with Indigenous Peoples’ Day, visitors will find a museum turned “inside out.” Among new, larger exhibits of northwest Native art, natural history, and dinosaurs, the public can now peak into 12 labs and workrooms enclosed by glass and see behind the scenes, perhaps glimpsing researchers and scientists poring over soil samples, bones or ancient baskets.

“Every single one of our colleagues said ‘you can’t do that, you can’t show everybody everything. That won’t work,’” said Burke Museum executive director Julie K. Stein at a press preview of the new museum, of reactions from others in the museum industry.

Perhaps just as groundbreaking and transparent to the public it serves, the new Burke Museum’s cultural exhibits were curated with significant input from the local cultural communities they represent.

Culture is Living, one of five new permanent galleries in the Burke Museum, showcases cultures from across the Americas, the Pacific and Asia. It was still being unpacked and set up at the time of the museum press preview. Others galleries in the museum are dedicated to Northwest Native art, biology, fossils, and archaeology.

The Culture is Living exhibit is a sort of re-invention of Pacific Voices, the culture exhibit on the bottom floor of the former brick Burke building (a building now reduced to rubble).

“It’s a very, very different approach,” said Holly Barker, Curator for Oceanic and Asian Culture at the museum, of the new exhibit. Pacific Voices separated objects and stories by culture: Samoan, Hawaiian, Filipino, Native Northwest. “There was a lot of sort of segregation in a way that’s a very colonial approach to representation,” Barker said.

By contrast, the Culture is Living gallery groups objects and stories from diverse cultures around themes: Land, water, community, generations, childhood. In designing the exhibit, the Burke Museum invited around 100 people from local cultural communities to share their stories about these concepts.

This is a more accurate reflection of the history of communities across North America, Asia and the Pacific, Barker said. “We want to put communities in conversation with one another,” she said. “Indigenous and Native communities have been connecting with one another for centuries. There’s this fluidity.”

The only part Culture is Living ready for display at the time of the press preview showcased objects related to water: A canoe from Pohnpei in Micronesia, another from the Muckleshoot Tribe in Washington, a boat from Papua New Guinea with a prow carved the shape of an alligator head. A sacred tatala canoe from the indigenous Tao (or Yami) people of Taiwan, intricately ornamented, had sat for years in an Ivar’s Salmon House on North Lake Union before it was found by Michael Jacobson, who donated it to the Burke.

While it wasn’t on display in the old Burke, museum staff made the tatala available to a delegation of Tao community members from Taiwan, who took part in a canoe journey alongside Northwest tribal members and held and blessing ceremony for the tatala.

Objects in Culture is Living will be labelled with the term from their original language first, followed by the English translation, and a quote from a community member explaining the object. “We wanted to make sure that its indigenous narrative was given the forefront,” said Randizia Crisostomo, Community Outreach Coordinator for Oceania and Asia at the Burke. Crisostomo acts as liaison between the museum and local communities, who have helped choose objects in the collection and provided stories and quotes.

Many of the objects will be displayed for the first time. Some, like the Muckleshoot dugout canoe, an indigenous Alaskan kayak, and a paddle from Hawaii, were commissioned for the new Burke Museum. Others have emerged from storage, such as a large, round basket boat used by Hmong refugees fleeing the war in Laos. The basket (still wrapped in plastic at the time of the press preview) spent years sitting on top of a storage case in the back rooms of the museum.

The museum can also play a role in safeguarding culturally-significant objects, Crisostomo said. “Many of the objects here too, many of our communities don’t make them anymore, or some of the youth don’t know what they are,” she said.

Community input helped shape the design of the exhibit, Barker said. “We were working with an elder from the Hawaiian community who said, ‘One thing that really bothers me about museums is you go to them and there’s often kind of a one-off piece — look at this big, extraordinary, unusual, eye-catching piece, come see this marvel’ — and museums have always kind of flocked around cornerstone pieces,” she said.

“What she was saying was, that just continues elitism. The number of people who would have seen that or had access to that within a community would have been very minimal and it certainly wouldn’t represent a community.”

The elder encouraged them to showcase everyday people, their tools, and the variety of skills in the culture. “By having tools it humanizes, because you can imagine a person using the tools, but it also brings more of the community into perspective,” Barker said.

For Crisostomo, a particularly meaningful object in the new Burke is one chosen by her grandmother, from Guam: A woven pouch that holds rice, which is boiled to make a sort of lunch box that fishermen would take with them out into the ocean. “It makes the space more intimate because of family being represented here,” Crisostomo said. “It’s way different than going to a museum and seeing an object and only seeing, ‘this is a box and it’s made out of cedar’…. It has more flavor, more emotion behind it, and more ethics to it. I don’t think I’ve really been in that many museums that really have that personal touch to them.”

Barker looks forward to the Culture is Living gallery serving as an educational space, which community members, family members of UW students, and elders can use to teach others. “We’re super excited to get people back in here, because really our vitality comes from the people,” Barker said. “We can’t do any of our work without people and without the communities.”