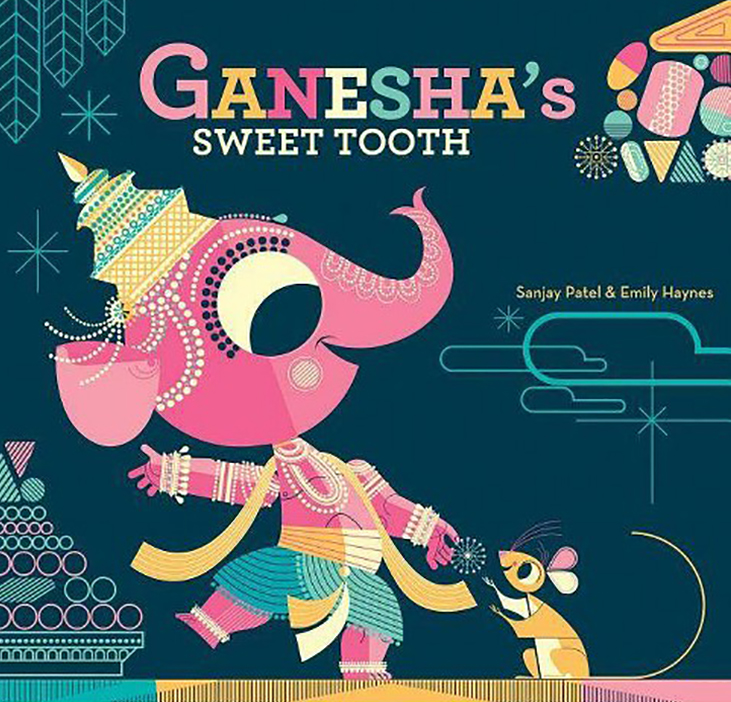 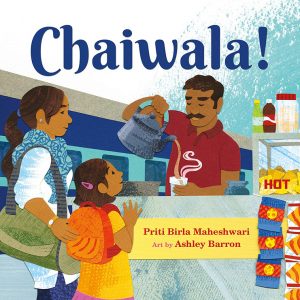 In her debut book, Maheshwari brings her childhood memories of chai to life in this experience of drinking tea on the train platform as the train is stopped for a while. There is an urgency because the halt isn’t long, and yet, there is a sense of luxuriating in all the senses as you savor the tea from preparation to first sip.

The chaiwala, tea seller, is ubiquitous at train stations all over India. In this story, a mother and daughter are on a trip through the state of Rajasthan, when their train arrives in Jaipur for a stop of 10 minutes. Perfect time for a cup of chai. From the clink-clink of the tea glasses to the grinding of ginger, cinnamon, cardamom and cloves to the rustling of the tea leaves to the bubbling of the sugary milk and the final frothing, chai is an experience, not just a drink.

The colorful art by multimedia artist Barron is a wonderful combination of illustrations and collage work. This technique brings the sensorial experiences to life. You can almost smell the aroma of the spices and see the steam curling above the steaming cup. 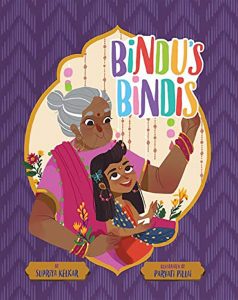 Bindis are stickers that come in a riot of colors and all sorts of shapes and sizes. Women in South Asia and its diaspora wear them on their foreheads daily or on special dress-up occasions. While the origin of the bindi is from Hindu religion, it is a secular tradition now for women of all religions.

Bindu adores wearing bindis to the temple, for holidays, and every day at home. Her beloved grandmother, Nani, sends packet after packet to her every month from India. Bindu has a bindi for every mood: lightning bolts for brave days, ovals for a proud performance, squiggly lines shout that she’s unique, flowers for silly giggles and so on.

One day, her Nani visits in person, and Bindu proudly wears a bindi to the airport. But racist protestors make her want to yank the bindi off her forehead and blend in. Instead, she holds her head up high and talks over the racist protestors. Bindu loves her Nani’s visit, matching with her, dancing with her, and wearing her bindis proudly everywhere for the world to see. In a simple story of bindis, Kelkar swirls in a deeper story of immigrant identity.

Pillai is a Finnish Indian artist who enjoys invoking emotions through color in her artwork, and this book is a fine example of her work. The endpapers are especially noteworthy. 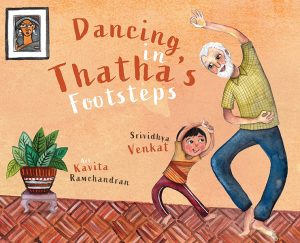 Singaporean author, Venkat, comes from an oral storytelling tradition, and it shows in this book as she spins an engrossing tale of a Tamil American family’s discovery of a shared love for Bharatanatyam, an ancient classical dance of Southern India. Dancing is for everyone of all genders, but there is stigma in the culture for boys who want to learn classical dance.

One day, Varun has to observe his sister Varsha’s dance class along with this grandfather, Thatha. And he is fascinated. He starts imitating the teacher’s moves, and it makes him feel light and free and fills his heart with joy. But Varsha and his friends say that dancing is not for boys. His spirits are crushed. Even though he stops dancing, dance follows him everywhere he goes. Thatha grieves at the boy’s conflict. Finally, he realizes that despite his bad knee, he has to show Varun that boys can dance, too. And Varun rejoices in the gift of dance.

Venkat’s author’s note at the end about today’s Bharatanatyam culture is worth reading. Graphic designer Ramchandran’s diverse, observant art evokes the ethos of the story in all its busy details. This book is a wonderful addition to the growing body of work by Yali Books, an independent publisher of South Asian children’s books. 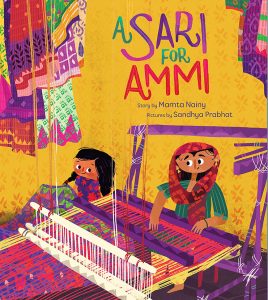 A Sari for Ammi by Mamta Nainy, illustrated by Sandhya Prabhat

This story takes place in Kaithoon, a town in the Kota district of the state of Rajasthan, which is well known for its intricate saris. Nainy’s note at the end has a fascinating history of the kota doria sari. Prabhat is a highly skilled artist in depicting emotions and movement all wrapped up in riotous color in her work, which is very much evident in this book. There is as much story in the art as there is in the words.

These two little girls are sad that their mother, Ammi, works so hard on designing beautiful saris, but doesn’t wear a single one of them. She only wears faded clothes. “If we keep the saris, how will we eat?” she asks. So the girls are determined to buy one for her. But they don’t have much money. They count all the money in their piggybank, but it is not enough. They collect all the junk in their home and neighborhood—papers, bottles, cans—and sell it. Still not enough money. They help their neighbor in dyeing threads for her weaving. And finally, they have enough money to buy back Ammi’s own sari for her from the shop. Ammi’s joy and smiles and tears are sure to be replicated on adult readers’ faces. 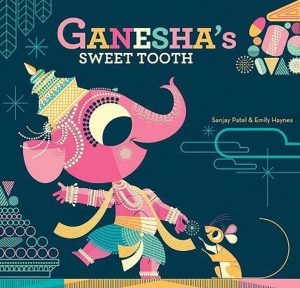 The art in this board book is gorgeous! Patel’s meticulous, filigree work in Adobe Illustrator fills the pages with utter delight. While this is in a glossy board book format, the story and art are not for the very young—more for preschoolers and older children.

Lord Ganesha is much revered in the pantheon of Hindu gods. But as a child, young Ganesha was naughty and very fond of sweets. He was just like any other kid, “except that he had an elephant’s head and cruised around on a magical mouse.” His favorite sweets were the round laddoos. One day, when he discovers a new kind of laddoo “The Super Jumbo Jawbreaker Laddoo,” he simply cannot resist trying it…and one of his tusks snaps off.

He is distraught and tries all kinds of adhesives and staplers to try to reattach it, to no avail. He is convinced everyone will laugh at him for having only one tusk. In anger, he hurls the tusk…and it hits a wise old man on his head. Vyasa, the poet sage, says that he has been looking for Ganesha because he needs a special scribe with a special unbreakable pen, and Ganesha and his tusk are perfect for the task of writing Vyasa’s very long prose poem.

And so begins the writing of the legendary story of one of India’s greatest Sanskrit epics, the Mahabharata, of one hundred thousand verses. There is a two-page spread in the book where there is no writing, but the major events of the Mahabharata are depicted.

There is a paperback version of the book, but the board book version is superior for the artwork.