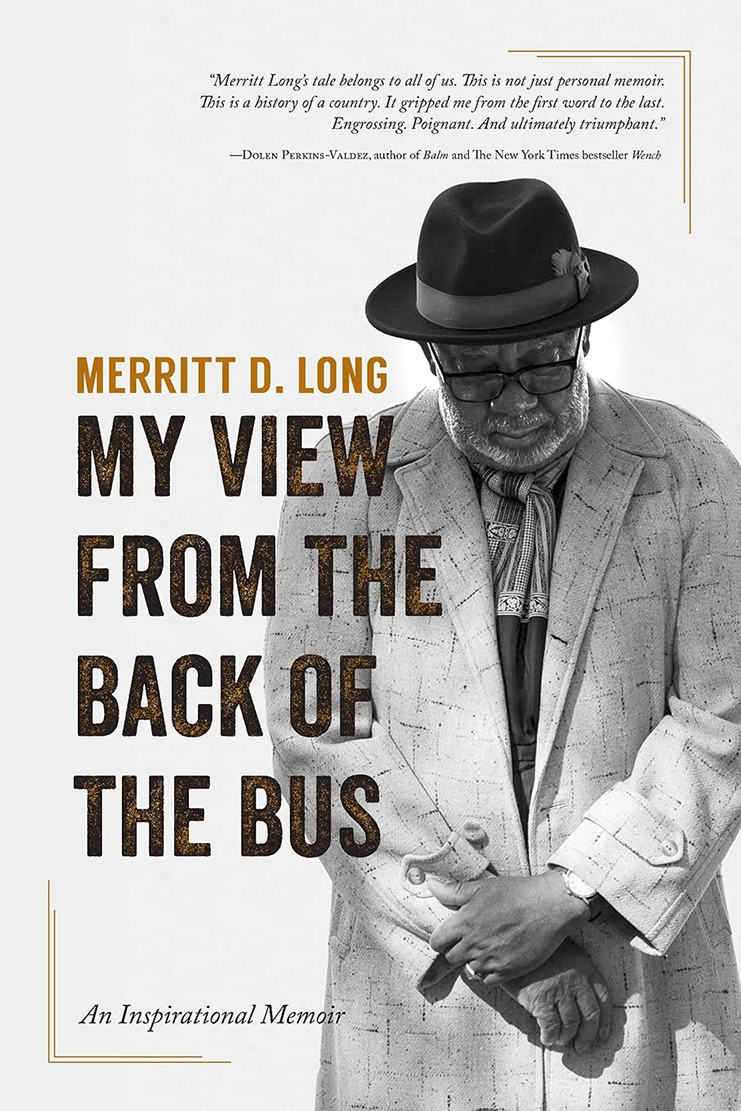 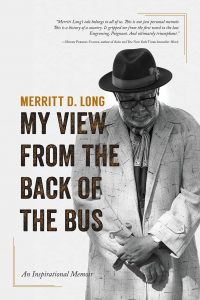 True to its title, the key scene of Merritt D. Long’s memoir My View from the Back of the Bus takes place on a bus ride, from his hometown of Bessemer to Birmingham, Alabama. It was 1951, and the author was just five years old. He was puzzled when his mother nudged him away from the empty seats at the front of the bus and moved him and his brother toward the back.

Long was still learning the rules of this fractured society, but this experience also gave him the blueprint for how to start fighting back.

The Black passengers were standing, and the bus driver started driving fast and hitting bumps that made them bounce. As the back of the bus “became heavy with despair,” an elderly passenger pointed out the driver’s cruel indifference, calling out, “Do not pay us no never mind. Don’t worry about going fast. There is no one back here.”

With these words of protest, mild as they were, Long writes, “My self-respect returned and judging by the faces of every Black person on the bus, so had theirs. It didn’t matter that we sat in the back of the bus.”

It was four years before Rosa Park’s revolutionary act. The passengers’ sense of self wasn’t returned by solving injustice – it wasn’t even dependent on the actions of the driver. Instead, inner worth was restored through the act of expression.

Creating dignity through expression is a good description of what this book shows and accomplishes over and over again. Subtitled “an inspirational memoir,” Long’s memoir follows his journey from childhood in the Jim Crow South to a 40-year career as a public servant in Washington government, where he served as director of the State Lottery.

Long writes most beautifully about growing up in Bessemer, depicting with perfect emotional clarity key moments of childhood and showing how the memories that live deep within our heart never fade. This is especially true when he writes about his mother, Katie Long, whom he called “seldom, if ever, unnerved; always focused and determined.”

When he was five, Long’s mother sat him down for “the talk,” the conversation about racism in America that is a rite of passage in many Black families. She told him how to keep himself safe from racially motivated violence, instructing him to obey police because they wouldn’t hesitate to kill him if they had the excuse. She told him to stand up straight when with white people and to look them in the eyes.

Long’s mother added, “Always believe you are as good as anybody else, no matter what people say.” With that, he learned to not let the realities of living in a racist society affect his sense of self worth. The messages he’d receive about being inferior were a result of white people’s ignorance, insecurity and need for power – not a reflection of who he was as a person.

This inner strength was tested throughout his formative years, like when he was a teenager and a procession of Klu Klux Klan members drove down his street honking their horns. Long heard that the caravan was a message from his boss at the local flower shop, a reminder that he needed to be more polite to the white customers — and keep away from the “whites only” restroom. He turned on the porch light as the hooded figures drove by to let them know he wasn’t scared. It was another subtle expression of dignity.

After attending Morehouse College, where he encountered the Reverend Martin Luther King Jr., Julian Bond and Muhammad Ali, he followed his brother Ken to the Pacific Northwest. He began his career in Washington state government as a parole and probation officer. He went on to lead the Washington State Board for Vocational Education, Washington State Human Rights Commission and Washington State Lottery, serving in the cabinet of Gov. Gary Locke.

When he retired, he and his wife Marsha Tadano Long, who also served as a director of a Washington state agency under Gov. Locke, started the Learning Seed Foundation. As of 2020, it has awarded nearly half a million dollars to 102 students who need financial assistance to stay in college.

Throughout his 40 years in state government, Long took to heart the lessons he learned during his childhood. At a convention of state lottery directors, the director from Texas assumed he was part of the staff, ordering a cup of coffee from him. Long looked him straight in the eye, just like his mother taught him, and told the director that he was one of the attendees. He belonged there just like him.

Despite many encounters like this, he focused on what he needed to get the job done instead of letting other people’s perceptions affect him. He was buoyed by his friendship with some of the most important figures in state government and community life, like Rep. Phyllis Gutierrez Kinney, Ruth Woo and the Reverend Samuel McKinney.

One day, he even got to meet another person who once sat in the back of the bus: Rosa Parks. They were both at a convention in Yakima. When he leaned over and told her he was from Alabama, she greeted him like an old friend. Later, he reflected on his time with her: “The look on her face seemed to signify that somebody soon the back of the bus madness would cease to exist. A new day is coming.” That day isn’t here yet. We’re still fighting. But by showing how far he’s come, Long’s story of strength and determination gives us hope for a better tomorrow.