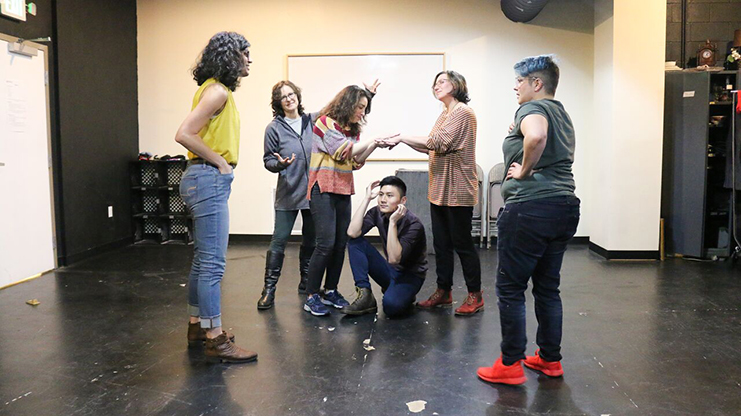 Chinatown International District residents have a new place to express their dramatic impulses: Freehold Studio Theatre Lab and Studio recently relocated from Capitol Hill to the CID and now plans to develop a 99-seat performance space.

These developments have been several years in the making, according to Freehold Artistic Director Robin Lynn Smith. “In 2015, we produced a show at Theatre Off Jackson that included a community-driven performance piece around the legacy of the Seattle Jazz Scene,” she said. “We were really inspired by the history and intergenerational engagement we encountered in the CID during that process.”

With its relocation, Freehold’s leadership was looking for a community-oriented location like the CID. “We also felt a kinship to the grassroots, family-founded businesses,” Smith said. “We saw this was not a neighborhood of chain stores or copies but authentic original family- or founder-owned businesses. We came from similar roots and have fought hard to remain true to our founders’ vision and mission.”

Smith reports finding the International District very hospitable. “What stands out for me is how Mark Chow was so open to our kind of business coming into his building,” she said. “He saw something in us that could offer something to his building and was welcoming and generous throughout the process.”

But the transition has not been without challenges. “Transitioning a long vacant space into Studios, Chow has stuck with us and supported us,” Smith said. “When the pipes burst under the street and our space was flooded after just a year into the lease, he moved as quickly as the City allowed to repair both the pipe and the damage to our space.”

All this assistance felt refreshing to Smith. “The other silver lining to that flood was learning about the incredible generosity of the folks at Hing Hay Cooperative space,” she said. “They opened their doors to us and became our administrative home as well as assisting us in relocating classes. I also remember Jamie Lee at SCIDpda who was so supportive of our moving into the space.”

But Freehold wasn’t satisfied to just replicate their previous lab and classroom space and wanted to build a fully-equipped performance space. “There are so few affordable venues for independent producers, especially ones that have the technical capacity for ambitious artistic projects and a place for emerging filmmakers to screen their nascent projects,” Smith said. “We will have a quality projector and ability to screen films or incorporate multi-media into performance.”

Freehold has taken inspiration from the New York City non-profit The Moth, a 22-year old organization dedicated to the art and craft of storytelling. “Our first project will be to initiate a Moth-type event where we invite community to share stories around a theme, maybe something around the authentic origins idea I talked about,” Smith said. “It would be a monthly or quarterly event that we hope would grow as we continue to build trust with members of this community.”

Smith acknowledges that a lot more work must be done. “Because of the infrastructure challenges, we haven’t yet been able to commit the time we would like to get to know our neighbors and build the kind of relationships we feel are possible that could enrich our work and offer an artistic resource to the community,” she said. “Our small staff and professional working artist faculty are stretched thin when anything out of the ordinary happens.”

Communication is key. “We also need to commit more time to overcoming language barriers,” she said. “We have a staff member who speaks Mandarin but again have lacked the time to set up opportunities to meet our community together with him. Hopefully the new performance space will be the catalyst we need.”

The Freehold staff and artists are looking forward to a productive 2020. “When we are confident of our completion date, we will put together a series of events, like The Moth, that we can invite CID community members to,” Smith said. “We will also tour groups through the space so they can better understand the resource we provide to the community.”

Smith hopes that Freehold and the surrounding neighborhood will nurture each other reciprocally. “As we build a more robust performance schedule, with both our events and those of independent producers who rent our space over the coming year,” she said, “more audiences will come to the CID for these events and we will be sure to share ideas for dining, parking, and shopping here as part of their interactions with us.”

Freehold has its goal in sight. “We want to be a resource and a gathering place for this community,” Smith concluded.