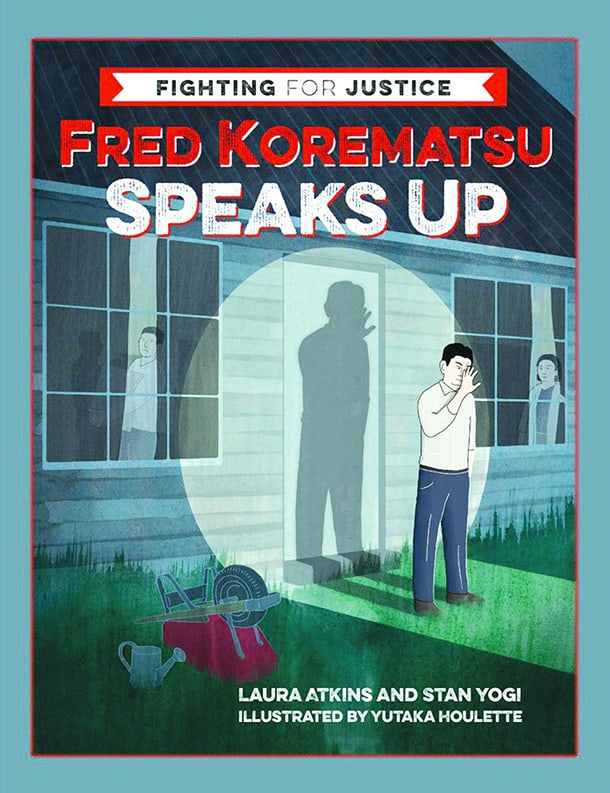 In our time of artistic and political resistance, Fred Korematsu Speaks Up by Laura Atkins and Stan Yogi, with illustrations by Yutaka Houlette, is a rare gift for young readers and parents of young activists-in-the-making. With a combination of poetic free verse, poignant illustrations, and a variety of historic photographs, the book provides multiple avenues into the story of Fred Korematsu. I was fortunate to speak with co-author Yogi via e-mail.

International Examiner: Your author biography states that your parents were incarcerated during World War II; is this what drew you to this project? How did you get involved?

Stan Yogi: Both of my parents were incarcerated during WWII—my mother in Manzanar and my father in Jerome—so my family’s history definitely motivated me to share Fred Korematsu’s story. But there was another impetus for me to co-write the book: Fred Korematsu is one of my heroes. Without family or community support, he challenged the Constitutionality of the forced removal and mass incarceration of Nikkei.

To stand up against the government at that time and in the context of WWII took tremendous courage. I first heard Fred speak in 1983, soon after his judicial vindication. I was a student at UCLA, and Fred visited the campus to talk about his case. I was struck not only by his remarkable story but by his quiet dignity. He did not have a big personality. But he clearly was a strong man who spoke simply and with the power of someone who had withstood daunting challenges with great humility. Years later, I met him through my work at the ACLU of Northern California, which defended him during WWII. He never forgot that the ACLU of Northern California stood by him, defying the national ACLU’s order that the Northern California affiliate drop Fred’s case.

I wish I could take credit for coming up with the idea for the book, but that belongs to the founder and now retired publisher of Heyday, Malcolm Margolin. He thought it a children’s version of Wherever There’s a Fight, a book I co-wrote about the history of civil liberties and civil rights in California, would inspire kids. That idea morphed into a series of books, “Fighting for Justice,” which Fred Korematsu Speaks Up is launching.

IE: The format of the book is somewhat unusual—a more poetic (picture-book) way of telling the story, with a more textbook approach to providing context. What made you decide to divide the book this way?

SY: The format of the book (poetic biography with separate historical/social background sections) was the idea of my co-author, Laura Atkins. That strategy for organizing the book was a terrific way to deal with two challenges: (1) telling Fred Korematsu’s life story in a compelling yet documentable way and (2) making the book accessible to kids, especially reluctant readers.

In terms of the first challenge, I learned through working on this book that profes­sionals in the children’s book world (edi­tors, librarians, educators) expect biogra­phies written for children to be engaging as stories and factually accurate. Conse­quently, dialogue, references to emotions, and details about thoughts and actions— the ingredients of a good story—all have to be documented. This expectation makes sense in the­ory but becomes a challenge for authors writing about de­ceased individuals who didn’t leave a trail of letters, dia­ries, interviews, and other records.

Lorraine Bannai, author of the excel­lent biography En­during Convictions: Fred Korematsu and His Quest for Jus­tice, very generously shared with Laura and me her research materials. And Eric Paul Fornier, director of the award-win­ning documentary Of Civil Wrongs and Rights: The Fred Korematsu Story, gave us a transcript of the film. Still, Fred didn’t talk much about his inner life. So, Laura and I faced a challenge in bringing Fred’s biography alive, while also being able to document and cite references for details. The free verse format allows us to tell Fred’s life story in a compact manner with documented details to enliven the story. The free verse format also makes the book more accessible to kids who might not be attracted to a traditional prose biography.

The separate biographical and contex­tual strands in the book allow different readers to access the book in different ways. More reluctant readers and those only interested in Fred’s life can read the biographical sections. Kids who are inter­ested in the learning about the historical and cultural context of Fred’s life can read the background sections, too.

Laura and I were very fortunate to work with an extremely talented and passionate editor at Heyday, Molly Woodward, who helped us energize the book with visuals, timelines, definitions, and thought-pro­voking questions that not only contextu­alize Fred’s life but also connect the ex­periences of Japanese Americans to other groups.

And Yutaka Houlette’s illustrations speak to children and offer other access points to Fred’s story.

If it takes a village to raise a child, it took a village—at least in this case–to create a children’s book.

IE: Was it difficult to write a “legal story” about court cases for kids?

SY: Translating the legal history into something understandable to kids was a challenge. We intended the book for fourth and fifth graders. Kids that age are just learning about civics and the courts. So, we couldn’t get too detailed about the intricacies of the legal history. Nev­ertheless, children have a keen sense of what’s fair and what’s unfair. Sticking to core points of unfairness—like Japanese Americans were imprisoned even though they didn’t do anything wrong and the fact that the government’s attorneys lied to the Supreme Court during WWII— conveys the injustice of what happened to Fred and to Japanese Americans.

IE: What’s been the response to the book looked like so far, especially from kids? What do you hope they take away from the book?

SY: Heyday launched the book on January 30, Fred Korematsu’s birthday which is observed in several states as “Fred Korematsu Day of Civil Liberties and the Constitution.” We also timed the book’s release to coincide with the 75th anni­versary of Executive Order 9066. Within three weeks of publi­cation, the first print run of 3,000 sold out. We believe that hap­pened, in large part, because Fred’s story is so relevant to our current political con­text.

This new political era of “alternative facts” and “fake news” is impacting kids. How can they distinguish between fact and fiction? Who can they believe? Whose voices are being suppressed or censored? For example, an Arkansas legislator introduced a bill to ban Howard Zinn’s writing from public schools.

Since late January, Laura and I have spoken to nearly 3,000 elementary and middle school students in California. (And we hope to speak with students across the country, including Seattle). We’ve been inspired by their responses to our presentations. Most had never heard of Fred Korematsu or the incarceration of Japanese Americans. They’ve been fascinated by Fred’s story and shocked by the details of the mass incarcera­tion of Japanese Americans. They also make connections between the Japanese American incarceration and the current administration’s targeting of Muslims and immigrants.

Laura and I hope that Fred Korematsu Speaks Up will help kids understand that they can take action and stand up for what is fair; kids can make a difference in their schools and communities by speaking up for justice, just like Fred.

After speaking at the Fred T. Korematsu Elementary School in Davis, California, three students wearing head scarves told Laura and me that their mosque had been vandalized. This was a troubling incident, but they beamed when they explained how they had organized a fundraiser at their school to generate money to clean the mosque.