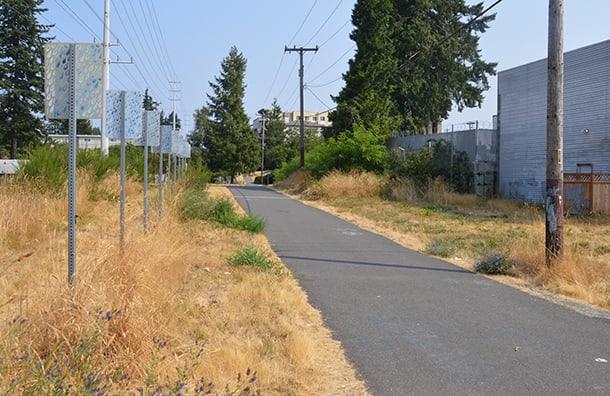 SEATTLE, Wash. – Marcus Choi was walking his dogs in the Bitter Lake neighborhood in North Seattle when he heard a man shouting behind him. “I turn around and he’s right up in my space with his forehead on mine,” Choi said, recalling the incident. “And then he’s yelling at me, he’s like, ‘You’re going to prison just like all the rest of you and your passports are gonna be taken away.’”

The man’s verbal abuse continued. As Choi, who is Korean American, shouted back at him, the man’s demeanor became more alarming.

“He has his hand in his pocket like he has a weapon or something, and he’s threatening violence against me,” said Choi.

Choi eventually returned home, but, still angry over the incident, he decided to return to area with camera in hand, hoping to get a picture of the man who accosted him.

“I don’t tolerate racism, especially in my own neighborhood,” Choi wrote in a Facebook post a few days later, which he titled “The Bigot of Bitter Lake.”

Choi eventually found the man—Caucasian, in his mid-30s—on an urban hiking trail, and snapped the picture. This started an argument, and it seemed to Choi the man wanted to fight. Choi exposed his face to see if the man would in fact hit him, which he did, knocking Choi’s glasses off and dislodging one of the lenses.

Choi called the police, but by the time they arrived, the man had left.

Choi says he’s lived in cities from Boulder to San Francisco, Chicago and New York before recently moving to Seattle, and that he’s never experienced such blatant racism.

“My sense of racism being out there is more at the top of my mind now. I’m kind of more expecting it now,” he said.

Nationwide, there’s been a rise in hate crimes and hate incidents, a majority of them targeting African Americans and Latinos. Other groups, including Muslim Americans, Sikhs, and members of the LGBTQ community have also seen increases in hate crimes, often in major urban centers.

John Yang is president and executive director of the advocacy group Asian Americans Advancing Justice (AAJC). He says while they’ve gotten less attention, attacks targeting Asians and Asian Americans have also risen. “We are seeing quite a number … higher than we have seen in the past, and disturbing in terms of the scope, geographically, and the types that we have seen.”

AAJC started a website, StandAgainstHatred.org, to track anti-Asian hate incidents. The goal of the site is to raise awareness of such attacks, which are sometimes overlooked in media coverage.

Yang says hate incidents against Asians are often driven by political rhetoric, including Trump repeatedly singling out China and North Korea during the campaign. “Asian Americans are viewed as foreigners oftentimes, even if they are 100 percent American citizens, and do everything that so-called normal Americans do.”

Incidents of anti-Asian hate reported from around the country range from very serious crimes (including murder), to bullying, verbal assaults and hate speech.

The Seattle Police Department (SPD) tracks bias incidents, both criminal and non-criminal. Data shows around a 25 percent increase in such incidents in 2016.

But even with the reported increase, experts say the figures are likely higher as many victims do not report encounters to authorities, while local law enforcement may sometimes decide against charging an incident as a hate crime.

In Choi’s case, while the attacker was never apprehended by police, his experience might qualify as “malicious harassment,” which is the legal term for a hate crime. Malicious harassment can include threats, physical injury, or destroying the property of someone because of their perceived race, gender, national origin, sexual orientation, and other categories.

Such cases can be challenging to pursue, according to Detective Beth Wareing, who investigates bias crimes at the SPD.

“One of the problems we often face with malicious harassment crimes is that they tend to be between strangers,” Wareing said. “They are opportunistic, they are incidents where the victim is surprised and just may not have time to register what’s happened before the person is gone. They can happen in isolated areas or areas where there just happens to be no video.”

Yang of AAJC notes that even non-criminal incidents can still harm people’s physical, mental, and emotional health. By tracking hate incidents, Yang’s organization intends to help dispel the myth that Asian Americans “have no worries or that they are somehow so-called fully-integrated into the United States,” assumptions Yang says are part of the “model minority” myth.

“The bottom line is that Asian Americans are seen as foreigners, and for that reason they’re singled out,” Yang said.

This story was produced through a partnership with ProPublica’s Documenting Hate Project. To report a hate crime, use this form. Reports will be verified before entering a national database that will be made available, with privacy restrictions, to newsrooms and civil rights organizations across the country. The form is not a report to law enforcement or any government agency.
Editor’s note: This story was updated on 8/9/2017 at 12:54 p.m.