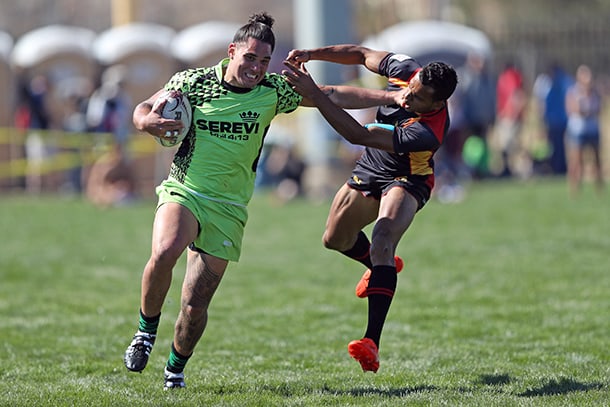 Over 120,000 spectators watched USA along with 28 other teams with fervor during the three-day world rugby event.

For USA, this year has been a journey of having to constantly push through despite various challenges from a tough start, disruptive pre-seasons, to a few sabbaticals—the squad is galvanized.

“This year is kind of setting the foundation for the next three years,” said Mike Friday, USA Rugby Sevens Head Coach, during a training session prior to the start of the Hong Kong Sevens tournament and an avid advocate of re-engineering the rugby program into American schools. “We’ve got new players in and we’ve got existing players to build the foundation around. So it has been a transition both on the pitch and also off the pitch.”

The squad is currently ranked fifth in the World Rugby Series standings.

The U.S. squad may see more of Hawaiian-born Psalm Wooching, who is based in Seattle.

According to Friday, Wooching had attended the squad’s training camp and already possesses the rugby equivalent.

Part of the “Seattle Boys,” Wooching is the recent recruit of the Seattle Saracens in the BC Premier League.

Wooching made headlines last February 2017 when he opted out of being a potential NFL player to pursue his love for rugby instead. Wooching played as an outside linebacker for the Washington Huskies before changing gears.

In an email interview, Wooching described his passion for the sport that is deeply rooted in his values.

“The brotherhood and chemistry you build with your teammates is amazing. … You are all equal out on the pitch. It’s not like football where the quarterback or running back gets all the glory. Rugby is a sport that most [people] on the field can do whether that is running the ball, tackling, and so on,” he said.

Friday said players like Wooching with American football experiences make it easier to change their techniques. But above all, this also helps widen the pool of talent for USA rugby.

“If we could now magnify that, we could have significant numbers of those athletes … there’s an alternative to being an NFL star. You could be an Olympian,” said Friday.

Asked about what Wooching learned from his training camp, he said: “I have managed to revamp my knowledge of rugby and to get more into the technical side of it. Not just the physicality and power but to know when to hit the rucks and when to shoot up on defense. Little things like that. My strength is my aggression and line running. I can apply that to both 15’s and 7’s, which is something that I took out of football and transitioned it into rugby.”

With the verse Psalm 144:1 tattooed on him, Wooching also has his eyes set for the next Olympics.

“They live below the poverty line”

Rugby is considered to be America’s “Sleeping Giant” due to its growing popularity. Yet it has not reached the same level of support compared to American football or basketball—something that Friday wants to change.

“We need to find a way to ensure that we got a program that is sustainable. And allows us [to have] the conveyor belt moving along … we’ve got this athletic ability in the United States. But to unlock that, we need to ensure that it sits in high schools and colleges,” said Friday.

Unlike teams such as South Africa and Britain with established programs and budgets that are able to cater for a bigger squad, Friday said the U.S. squad doesn’t have a proper one. His players live on stipends and “live below the poverty line.”

American flags were seen on stands on all four corners of the Hong Kong stadium. Cheers from kids and adults alike were heard as they waited patiently for their favorite players’ autographs and photo-ops.

The Eagles recently played at the Singapore Sevens where they finished second against Canada, 19-26.

And for the first time in the United States, Rugby World Cup Sevens will be held in San Francisco in 2018.