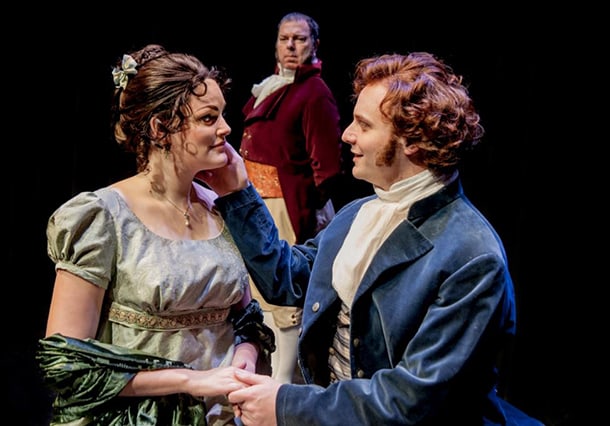 Harold Taw and Chris Jeffries are pairing up again to create another musical: Persuasion, a musical adaptation of Jane Austen’s final novel.

Taw and Jeffries first met at the 5th Avenue Writers Workshop, where they initially created an original one-act musical called The Missed Connections Club in 2014.

“For me, the 5th Avenue Writers Group was like doing a masters program in musical theatre,” Taw said. “For two years, we met twice a month with the 5th Ave’s New Works staff, including such talents as Ian Eisendrath, presently music-directing Come From Away on Broadway, and our special adviser Albert Evans, an award-winner in all aspects of writing musicals.”

Taw says that the decision to work with Jeffries a second time was easy to make. “Chris and I love each other,” he said. “The 5th Avenue Theatre was the matchmaker. We’re an arranged marriage that worked.”

A number of factors led Taw and Jeffries to the choice of Austen’s work as the foundation for their next project. “By background, I’m a novelist. I’m also a huge Jane Austen fan … obsessively so,” Taw said. “When I’m stressed out, I reread her novels to marvel at how she can make what was so difficult to write appear so effortless.”

But it is the drama of the novel itself that swayed them to pursue the project. “Persuasion features passionate characters filled with regret and nostalgia over the mistakes they’ve made,” Taw said. “To a reader, the violence of the main characters’ emotions is never in doubt because we can see inside Anne Elliot’s head.”

Taw believes musical theatre is the best medium by which to translate Austen’s work from the page to the stage. “To a viewer of a film, for example, such feelings have to be translated into lingering close-ups, or veiled in coded language,” he said. “A musical can be truer to the spirit of the novel because music can express with immediacy and poignancy otherwise inexpressible feelings and thoughts.”

But that doesn’t mean that the process of adaptation is easy. “In a word, grueling,” Taw describes this work. “In two, grueling and rewarding. The axiom that ‘musicals aren’t written, they’re rewritten’ is true.”

Because of the extensive revision process for new musicals, Taw is grateful for the support, first, of the 5th Avenue Writers Workshop, and later, of the Texas Musical Theatre Workshop. “There are so many moving parts to staging a musical and, as with sheet music, you can’t simply read the page and know what you have,” he said. “You have to see, hear, and feel it in real time.”

Taw’s appreciation for the actors who helped in Persuasion’s development is unbounded. “There’s no way to overstate the importance of having actors read and sing through a musical,” he said. “You’ve got one shot with the audience, whether in dialogue or in song. You’ve got to make sure it lands.”

While some theatre creators struggle to maintain ownership of their work during the development process, because so many voices contribute to the conversation, Taw instead found the process to be one of growth and creativity. “At our 5th Avenue reading, we learned that our show had good bones, and flagged places we needed to improve,” he said. “At Texas Musical Theatre Workshop, we got to experiment with the solutions, whether through new songs or through emphasizing certain characters more.”

And it was the 5th Avenue’s leadership that helped give Persuasion continued life at Taproot Theatre. “Ian Eisendrath recommended our show to Taproot’s Associate Artistic Director Karen Lund,” Taw said. “And quite thankfully, Karen was interested in hearing our demos, flew out to see the Texas workshop, and committed Taproot to a year-long development process with us.”

In that new partnership, Taw felt he had met his match. “At Taproot, it was quite daunting to be confronted by people who know and love the novel as much as I do,” he said. “And quite enlightening.”

The Taproot team helped Taw and Jeffries dig into the minutiae that Austen’s novel has to offer. “I have to say, there were certain passages that I glossed over at first because I thought them too difficult to translate,” he said. “But the creative team never let me off that easy. And the show is far better because of it.”

As a fairly new writer in the realm of musical theatre, Taw always hearkens back to credit much of his growth to the 5th Avenue Theatre. “My interest and understanding of musical theatre has grown exponentially,” he said. “As an audience member, I was frequently swept up in the wonder. As a creator, I now have the discernment and tools to try to build that wonder, which involves a remarkable investment of time and sweat, from the ground up.”

Taw already has ideas for what’s next after Persuasion. “There are only two novels in the history of literature that I considered turning into a musical,” he said. “One is Persuasion, which is a dream come true.”

And what’s the other one? “The second is Egyptian Nobel Laureate Naguib Mahfouz’s The Harafish, roughly translated as Urban Riffraff, a sprawling novel about poverty, passion, and democracy that unfolds over twelve generations in a single alley,” Taw said. “I’m still trying to persuade Chris to join me on that one!”