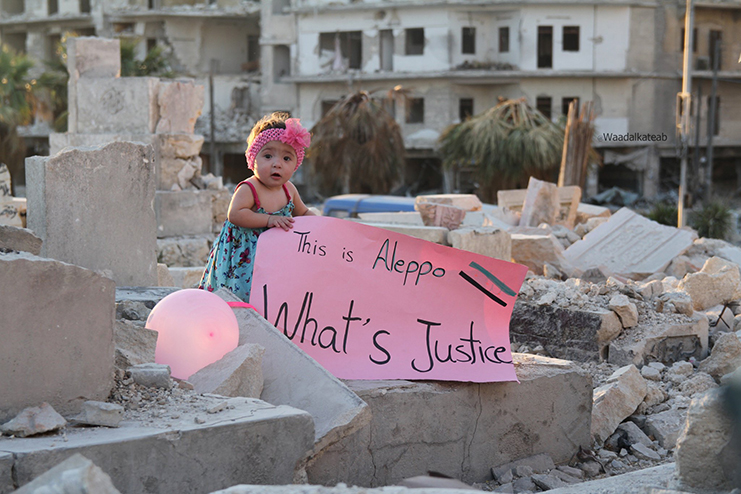 Over the past eight years, the world has watched as the Syrian Civil War unraveled and caused massive chaos and destruction, effectively displacing over half of its 22 million population. According to the UN High Commissioner for Refugees, 6.6 million people have been displaced internally and 6.1 people have become refugees. These figures do not include the death toll, which was roughly estimated to be 511,000 in 2018 by the Syrian Observatory for Human Rights. The World Health Organization stated in 2016 that one week in September counted 338 deaths, over 100 of them being children.

As the war gets increasingly complicated (this year with Turkey’s invasion into northern Syria to lead an offensive against Syrian Kurds), media coverage of the crisis can often be limited to the war itself, ignoring the plight of average citizens who show their resilience to the regime by resisting displacement and finding extraordinary ways to provide service to those in need. Hamza al-Khatib and Waad Al-Kateab are activists and a husband-and-wife team who did their own part to fight the injustice of the Syrian government: Waad wielded a camera and recorded events that state-controlled media and the regime refused to acknowledge; Hamza opened and managed a hospital to help save countless lives.

For Sama, a documentary co-directed by Waad and British filmmaker Edward Watts, is the latest film released this year about the Syrian conflict. A love letter from Waad to her infant daughter Sama, she explains why she and Hamza decided to stay in war-torn Aleppo, a city once considered to be the country’s largest. Waad and Hamza wanted to serve their people and fight injustice, even if it meant dying and leaving their daughter parentless. They even went so far as to adopt pseudonyms to protect their families.

Northwest Film Forum will be showing For Sama starting Nov. 6 ahead of the broadcast version PBS Frontline will be airing on Nov. 19. Funded by Channel 4 in Britain and PBS Frontline, it is the winner of numerous awards, including Best Documentary at Cannes. Waad and Watts sifted through 500 hours of footage that she had compiled from 2011 to 2016 before she and her family were forced to go into exile and flee to Turkey. A citizen journalist, Waad had been reporting and sending footage to Channel 4 for a segment called Inside Aleppo since early 2016. Her reports and footage helped Channel 4 News win its third International Emmy a year later.

“Many films have been created in the recent past about migration, displacement, and the refugee crisis, but For Sama was one that immediately struck me,” said Vivian Hua, executive director at NWFF. “It captures the essence of war’s unfiltered devastation in a way that is unbelievably personal and compelling.”

Although Aleppo became a major battleground in July 2012, the name may have been as unfamiliar to many Americans as it was for Gary Johnson, the 2016 Libertarian candidate and former governor of New Mexico whose television gaffe during an interview with MSNBC revealed his ignorance about foreign affairs. This question from Johnson inspired Al-Kateab to respond with a picture of her daughter standing amidst the rubble in Aleppo with a sign that read, “This is Aleppo. What’s Justice?”

Before the war, Aleppo was the country’s financial and commercial center. It is also one of the oldest continuously inhabited cities in the world with references dating back to 3000 BC. Officially referred to as The Ancient City of Aleppo, it became a UNESCO World Heritage Site in 1986.

Al-Kateab was a fourth-year economics student at Aleppo University when the Arab Spring revolution started in Syria on March 11, 2011. Syria’s authoritarian government had arrested and tortured 15 students for writing anti-government graffiti. The death of a 13-year-old boy in particular named Hamza Ali Al-Khateeb, who had been arrested and detained, sparked the anger and indignation that would fuel the protests even further. As members of government forces defected and joined the protesters, they formed the Free Syrian Army, which was later joined by other rebel groups.

As the war shifted to Aleppo, the city became divided into two strongholds: the rebels in the east and the government in the west. Waad moved to the east to protect herself from the regime but soon found that staying alive was a challenge as eastern Aleppo was pummeled with air strikes, particularly from Russia, which had entered the war as a Syrian backer in 2015. Russia and the Syrian government have been accused of targeting hospitals and denying medical care as a “weapon of war.” Hamza’s first hospital was destroyed by shelling but he managed to find an unmapped, newly made building to designate as his new hospital, al-Quds.

Aleppo was besieged in July 2016 when regime forces cut off Castello Road, a main artery into the eastern side, trapping 250,000 people. In a course of 20 days, al-Quds hospital had received over 6,000 patients; its doctors had performed 890 operations. Evacuations of survivors started on December 2016 when both sides agreed to end the fighting in Aleppo. The government claimed full control over the city on Dec. 22, which was when Waad and her family left.

“Russia and the U.N. and all these people were very proud of getting us out of there safe, but for us, displacement was the last crime against us,” Waad said in an interview with the independent film magazine Film Inquiry, explaining why she wanted to make this film. “I didn’t want Russia to be credited with saving the people of Aleppo because displacement was just another one of their crimes.”

Being married to one of the last doctors that stayed in eastern Aleppo, Waad had the trust of the community to obtain jarring images and stories that documented the pain and suffering of the people. After some of her dearest friends were killed, Waad wanted to document everything around her, understanding the footage may be the last thing she will have to remember them by. At the very least, she will have evidence of what they had endured as a record against the government and its various alliances.

This documentary is not for the faint of heart. Bloody faces and dead bodies seem to proliferate with many a sobbing parent over their dead children’s body, but astonishing stories, such as the one where doctors miraculously pull a baby back from the cusp of death, can be found here as well. Although this is a mother’s love letter to her daughter, it is also a love letter to Aleppo, the city where she started her career as a journalist, fell in love, bought a home and started a family. The war is seen through the eyes of a woman, mother and wife, enabling audiences to see a whole different side to the war that is often invisible to the world.

For Sama shows with aching clarity that Syrians do not want to leave Syria: It is their home; it is their country. To leave is to break their spirit and heart. Becoming a refugee is their last option. Although the battle in Aleppo is over, the film is representative of what is happening in other Syrian cities such as Idlib, where many people have been evacuated to. Be prepared to be moved and inspired to make a difference.

Check nwfilmforum.org for tickets and showtimes.