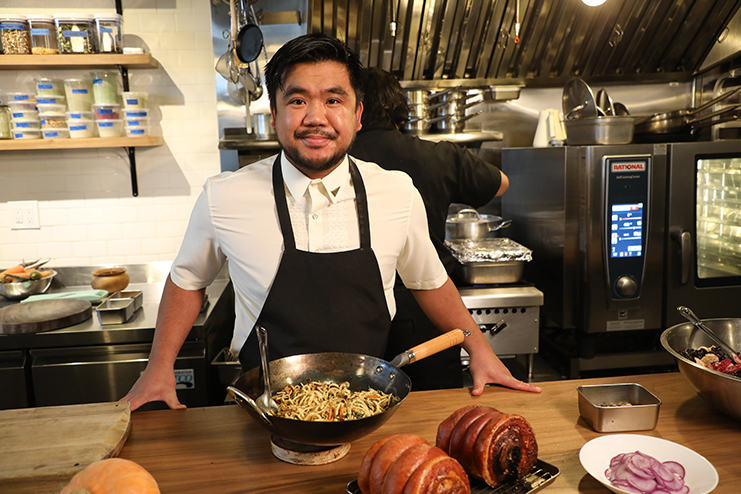 When Aaron Verzosa and his wife opened Archipelago, a Filipino American fine-dining restaurant in Seattle’s Hillman City neighborhood, they took on a loan and a financial risk.

Inspired partly by Archipelago’s experience weathering the storm of COVID-19, Verzosa also appeared in an ad calling for progressive taxation, that will run in select legislative districts.

Washington state has one of the most regressive tax systems in the country. Low income people pay a far higher share of their income as taxes than wealthy people do.

Lawmakers in Olympia are considering bills that would introduce new progressive taxes, including a real estate tax (HB 1465), a tax on large profits and capital gains, (HB 1496), to pay for small business help, public health and early childhood education.

Verzosa believes taxes like these would have wide-ranging, positive effects on the small business landscape and on the lives of workers and entrepreneurs.

Verzosa and his wife, who are both Filipino American, started Archipelago because they wanted to bring their culture to the world of fine dining.

The pandemic coincided with the birth of their first son, and the couple live in a multigenerational household. It was a difficult time, but they were determined to keep their restaurant open.

They were faced with the question of how to transition an eight-person fine-dining restaurant into a safe takeout operation.

Then, they had to figure out how to not only survive financially in the moment, but continue paying the business loan they took out to start the restaurant.

Archipelago was able to retain all its employees, but finding financial resources for the expenses, and navigating aid from the multiple layers of local government, was a challenge.

While transitioning to a takeout model worked, the restaurant’s income has dropped to at most 30 percent of its previous income, Verzosa said. And bridging the time between now and when people are vaccinated enough to dine indoors looks like a challenge.

The types of grants that have been available for restaurants during the pandemic have fallen short of the need, Verzosa said. “A lot of them, they feel like they could be bandaids, a one-thing-fits-all situation,” he said. “If we had, on a state level, the funds to really bridge the gap between now and restaurants being open, it would be so much better.”

Verzosa thinks a more progressive tax system should have been implemented years ago, so that businesses could have emergency funds to help them survive during times like this.

“If there had been reform already,” he continued, “a lot of the businesses that you see now barely hanging on might have had the capacity to have more funds.”

More financial relief for restaurants – grants or tax relief – would also put money back into the whole food system, he said, because Archipelago and other restaurants source their ingredients from local farmers, butchers and other small businesses in the Northwest.

Using progressive taxes to build the social safety net and fund more early childhood education would also be a great help to many restaurant workers who are parents.

“When you end up working to really build the diversity in a city that then gives a really great sense of wanting to come here because of that rich culture,” Verzosa said, “it’s only fair then to make sure that we can continue to build that and have the funds to do that.”