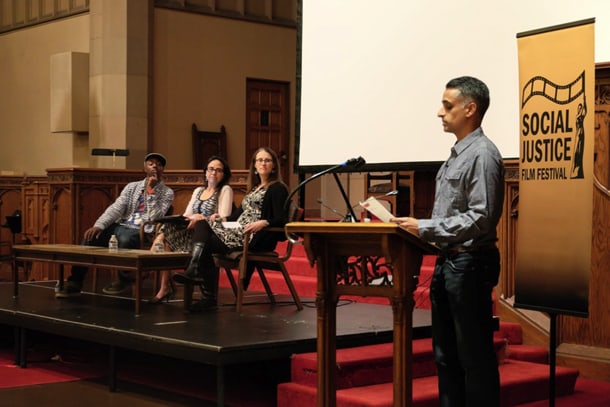 Nationwide activists and local community organizers gathered on October 16 and 17 at the University Christian Church to talk all things food justice during an event held by the Social Justice Film Festival and the Columbia Legal Services.

Films featured included those focusing on food industries in Washington, Florida, and even Panama. One was director Sanjay Rawal’s new Food Chains, which follows a group of tomato pickers from Southern Florida fighting for better working conditions and a more transparent food chain. Rawal, who has also worked in international development for over a decade, talked with the International Examiner about his work on food justice and the panel he moderated while in Seattle. Below are edited excerpts.

How would you describe the concept of food justice?

Sanjay Rawal: Since the dawn of our nation, our food system has lacked parity and equality. Equity, or ownership, of our food system has become more and more concentrated. In the 21st century, the concept of food justice involves equal access to supply or goods and the possibility for a rightful stake in ownership and decision-making. For too long, those marginalized (including consumers in low income neighborhoods as well as low wage workers at all levels of the supply chain) have been excluded from both aspects. This has to change.

You’ve worked in aid and development for a number of years, but was there anything in particular that made you specifically work for food justice and the agricultural industry?

Rawal: My decision to focus on the food industry was personal. My dad, Dr. Kanti Rawal, is a well-known food scientist and plant breeder. He introduced me to the industry as a whole. My teacher, Sri Chinmoy, made me feel the importance of gratitude to those that provide what we need to maintain our lifestyles.

What was the most surprising thing you found while working on ‘Food Chains’?

Rawal: The abuse of workers in agriculture is absolutely shocking but what surprised me the most is the unwillingness of large corporate grocery chains to support solutions. In Food Chains, we focus on the Coalition of Immokalee Workers in Florida and their battle against the southern grocery mega-chain, Publix. Publix knows the problems in its supply chain and it knows the solution—the CIW’s Fair Food Program. Yet it, and Safeway and Kroger, refuse to support this solution. In failing to join CIW’s program, these corporations perpetuate the injustice at the base of our supply chain.

‘Food Chains’ focuses on Southern Florida, but do you have any knowledge about how the working conditions for farm workers differ in different regions across the country?

Rawal: Farm work always has been one of the most difficult, most poorly paid, and most abusive jobs in America. There are federal protections for every class of worker, except farm workers. This is a direct legacy of slavery. We focus on Southern Florida’s tomato industry, which was once the most repressive sector of agriculture. Thanks to the CIW and local farmers, it’s now the most progressive. Even in Washington, we’ve seen the fight the Sakuma [Brothers Farm] berry workers have had to wage simply for justice and equality—and an end to abuse. And that fight isn’t over.

You came to Seattle to moderate a panel discussion on October 16 on issues related to fair production and access to healthy food for all. What were your main takeaways from that conversation?

Did you find anything new/surprising in talking with local and national advocates working on food justice?

Rawal: I was grateful for the chance to meet DJ Cavem, Andrea Schmitt, and Emma Zavala-Suarez, the panelists who participated in our Seattle screening. It is clear that there is much work to be done, but that there are hundreds (if not more) incredible activists whose dedication to food justice is changing the system in quite meaningful ways.

What do you think are some factors that prevent equal access to healthy food for all communities? How can we even begin to address these factors?

Rawal: Our entire food system is run by gigantic grocery and fast food corporations. In the scheme of things, even Monsanto is a small player. Monsanto is just a middleman, so to speak. If retailers of food, like Wendy’s or Safeway refused to sell GMO products, Monsanto would be out of business. Safeway, for example, had almost four times the revenue of Monsanto. Safeway is in a couple dozen states, at most, but Monsanto is global. Food conglomerates are gigantic.

Many times, low-income communities don’t have adequate access to food. That’s because these large retailers don’t see the value in serving everyone. In fact, they only serve their bottom line and their shareholders. Yet, they control massive amounts of our food system. If this isn’t a national security issue, I don’t know what is.

Our security apparatus is intended to support the American way of life, yet millions of people go to bed hungry each night due to lack of access to affordable food. Is this lifestyle worth protecting? Or is it worth changing? I choose the latter.

The food industry is a cobweb of various points in the supply and demand chains, sometimes with issues simultaneously plaguing different aspects of the industry. What are some day-to-day changes that people can do to make the industry a fairer one?

Rawal: Movements don’t start with answers, they begin with questions. We’re at the beginning of the next iteration of the fight for fair treatment of workers. Support the CIW’s Fair Food Program by visiting ciw-online.org. Watch Food Chains on iTunes or Netflix. And support local farmworker movements for justice.

Begin asking questions of your food suppliers. Ask them how workers in their supply chain were treated. Chances are they won’t know, but if enough people ask, we will create market demand. That demand will necessitate stores supporting farmers and suppliers that do treat workers well.