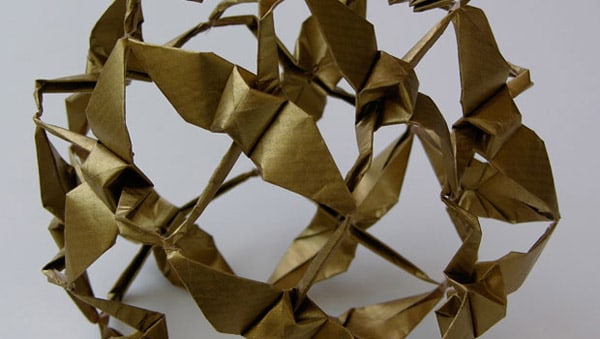 The legend goes that in second century AD, Chinese eunuch Cai Lun developed the process of making paper out of pulp. The process remains essentially the same today.

While mostly used for printing and writing, the malleability of paper resulted in its use for packaging, folding and shaping. People soon discovered that folding paper could result in decorative, utilitarian and eventually representative shapes. Originally the intensive time consuming manual manufacturing process limited the access of paper to the wealthy and religious elite and was treated with religious reverence. It wasn’t until the 19th century Industrial Revolution would affordable paper be available to the masses. While diagrams of early folding existed centuries before this it had little meaning to the general population. Using these roots, paper folding was soon taught as a simple craft for children to enjoy.

This exhibit “Folding Paper: The Infinite Possibilities of Paper,” curated by Meher McArthur with the assistance of Dr Robert J. Lang, follows the evolution of what some people today still think as merely a children’s craft into what it has developed as an art form, a complex mathematical exercise and as a utilitarian construct. Presented here are over 140 works created by 45 master folders.

A photograph of Akira Yoshizawa (1911-2005) hangs in this collection. He is the progenitor of looking beyond the traditional models taught for centuries and seeing paper folding as a base for creativity. Practically all the modern models presented here have their roots in his vision. He pioneered the use of a combination of hard creases and gentle creases to create dimensionality. You can see this in the “Red Tailed Hawk” of Robert Lang and “Grasshopper” by Brian Chan.

Yoshizawa developed the process of wet folding where the paper is dampened to soften the paper sizing (glue) allowing the paper to be sculpted. This brings life to Eric Joisel’s “Mask” and the minimalist curvature of Giang Dinh’s “Prayer.”

While Yoshizawa created models with realistic details unseen before in paper folding, he also created works of minimalist art such as seen in Koshiro Hatori’s “Double Pleats” and Roy Iwaki’s “Tiger.”

On the wall hang three crease patterns of Robert Lang’s models. Yoshizawa, with later additions by Samuel Randlett and Robert Harbin developed the universal symbolic language of origami design instructions. And like sheet music, people learn that simply following the instructions don’t necessarily get you to the complex subtleties of the completed compositions.

Using Yoshizawa’s vision of paper folding as a creative stepping stone, there are new roads presented by modern folders. There is the use of curved creases as seen in David Huffman’s “Hexagonal Tower” and Jeannine Mosely’s “Triacontahedral Orb.”

Eric Gjerde authored a book on what is referred to in the origami world as tessellations where a sheet of paper using a series of three-dimensional collapsing folding moves creates a series of repeating patterns on the paper. His “Vertebral Stretch” is on view as well as Joel Cooper’s multi-dimensioned “Cyrus.”

Vincent Floderer learned to appreciate the crumpling patterns of paper and how they could be artistically used as in his work “Boom.” Michael Lafosse creates hyper-realistic effects by making his own custom abaca fiber and powdered mica paper for his “Frog” and Hieu Tran Trung achieves this by paying close attention to details in his Velociraptor Skeleton.

Modular or unit origami where several pieces of paper are woven together are on display with Miyuki Kawamura’s “Turbulence” and the innovative use of coiled paper in Krystyna and Wojtec Burcyk’s “Mosaic Twirl.”

Miri Golan’s use of connected figurines between the Torah and the Quran in her piece “Two Books” and Sipho Mabona’s use of uncut U.S. one dollar bill sheets in his installation “Plague” provide social commentary.

The range of origami technique, artistry, and utilitarianism is huge and unrealized by the general public. This is a rare event that should not be missed. This traveling collection’s exhibit book, Folding Paper: The Infinite Possibilities of Folding Paper by Meher McArthur and Dr. Robert J. Lang is produced by Tuttle Publishing and is commercially available. The exhibit will be at the Bellevue Arts Museum until September 21.