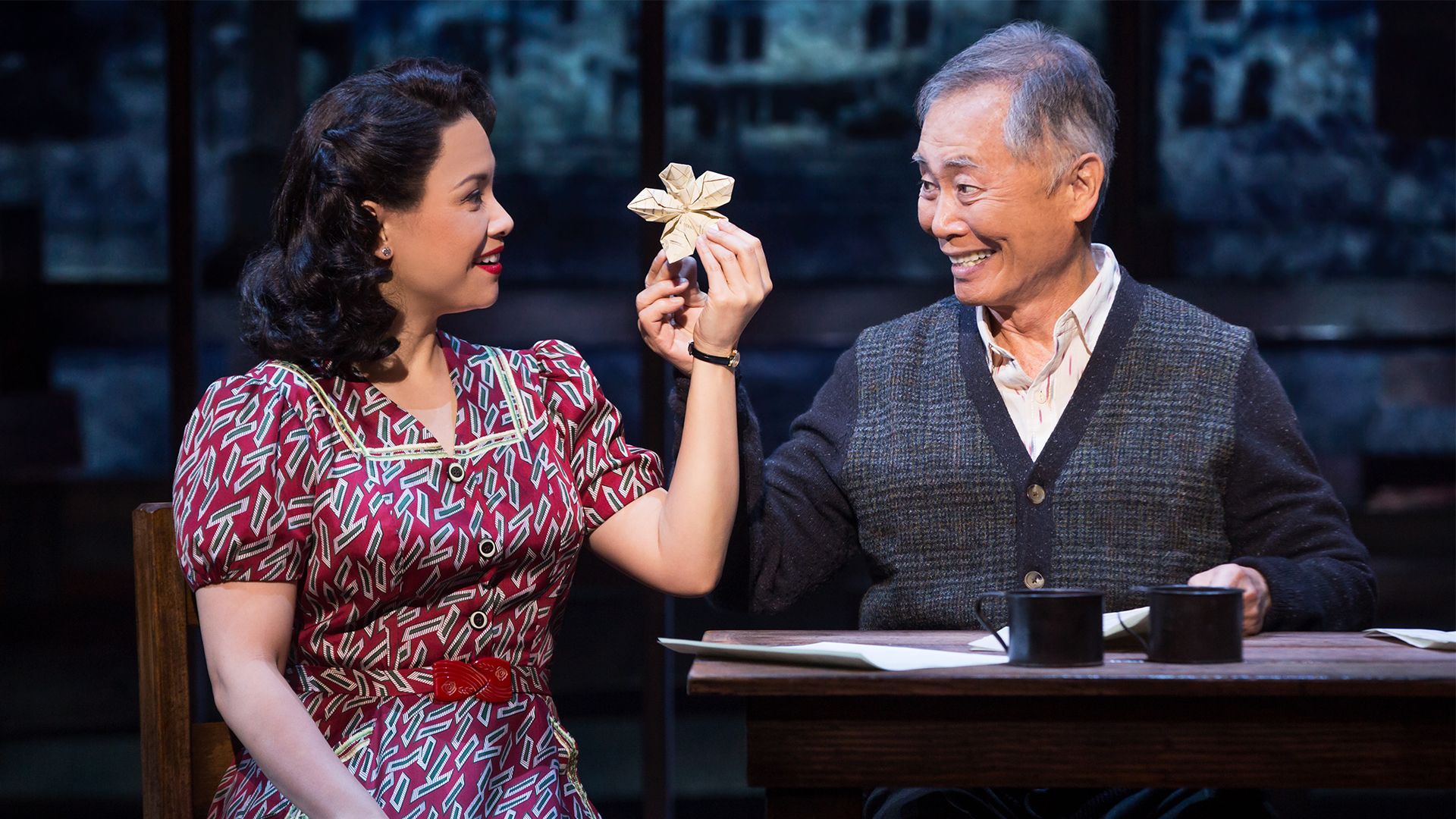 Bear with me, as I order my thoughts, memories, anger, depression, and feelings over the last few months in order to write about my reactions upon seeing the movie of Allegiance, the Broadway musical produced by George Takei. Allegiance is about the incarceration of Japanese Americans living on the West Coast during the 1940s. Takei’s artist’s rendering of the past collided with the remarks of our president-elect, about inclusion and exclusion, enemies lists, and the specter of mass incarceration.

In addition, my Nesan Toki is in a memoir workshop at her assisted living center and she asked me to help with memories and documents that I had about Dad, stuff that Toki and I had collected years ago under the Freedom of Information Act. About his “subversive” activities. And lists of organizations he was tied to. About citizenship school. His “alien registration card.” I remember Mom reminding Dad to get his registration done.

I’m trying to focus on the past, the future, and the present because it’s all connected. Right now. My brain’s working on overload.

What to do, what to say, what to write?

“Little Sun” and “Little Stew.” Two preschools that were started by Mira’s mom Cathie and some of her friends. “What cute names for preschools,” I thought, before being told that they were “Littles I” and “Littles II.”  This project had something to do with LBJ’s “War on Poverty” funding, when an agency called “4 Seas” (again, my mistake, this was really CCCC, for Community Coordinated Childcare Centers, I believe) which sponsored this modest early learning program.

Back then (the 1970s), major national cultural events were on one of three major TV networks (ABC, CBS, NBC) there were no other media (PBS just didn’t have any clout then) that could compare.

The Wizard of Oz

One day, Cathie came home from work and noted: “Today, all the kids were talking about The Wizard of Oz. I think every kid (and probably their parents) had watched it.” Including Mira.

“They were talking about Dorothy, the Wicked Witch, Tin Man, Cowardly Lion, etc., and of course, the red shoes.” Including Mira, even though we didn’t have a color TV. Mira had seen The Wizard of Oz movie (at a theatre) at least three times before that television “happening,” so I’m positive she saw the red shoes on the black and white TV also.

I. Big Sun: Mira and I arrived at the theater fashionably late JA time (15 minutes before the film was scheduled to start), and it looked crowded going up, so we went down into the front section. Sat in seats with nobody sitting in front of us. If I was at the live musical, I would have been at the back of the theater, squinting, trying to see what was going on, while weaving my head to get good sight lines to the stage.

II. Big Stew: When the movie of the stage performance started, I was overwhelmed by the size, everything was huge. The people on the movie screen were, well, larger than life! I could see everything, and realized immediately this was not going to a be just a documentary with some music and dance, but had a chance of being good. Of epic proportions.

As the movie progressed, I was drawn into the individual characters’ stories and the music because the production became a stage for how people cope with forced confinement. Confinement for no other reason than what they look like and who their ancestors are. Try to make some sense out of that. They collect stones, they talk, they write, build baseball fields, then play baseball on them. Grow flowers. Vegetables. Sing and dance. Fight amongst each other. Volunteer to join the army to prove their loyalty. And resist the draft to prove they’re American. Anything to take the sting away from being locked up.

III. Big Tree: After the movie credits ran, there was a short film clip of a George Takei interview that brought the whole project into perspective. One jarring note in the plot line of the play: an implication that the Nisei Vets were isolated when they returned, and the draft resisters were more welcomed by the community. Resister-coming-home stories do not back that up.

Upon further thought after the film clip, I realized that the play was Takei’s own take about what went down during the post-mass incarceration years.

In the clip, Takei said that he had, in anger, criticized his dad for leading the family to the incarceration without any resistance. His dad silently walked out of the room and closed the door behind him. Takei said that he never got a chance to apologize to his dad.

Takei was not alone. Many others thought the same. But a larger group thought it best to ride the tide. Even forget the whole thing had happened. Group amnesia. It happens.

IV. Big Shi: I’ve heard Takei speak many times about the mass incarceration and he has always said, that he admires the Nisei Vets for their services and sacrifices in WWII, but he did find what the resisters did to be more heroic. Allegiance reflects GT’s personal story and thoughts about the experience, and the production is partly the apology to his father. He is also telling us, how easy it is to divide communities and families into fighting amongst themselves, while ignoring the true oppressors. And even worse, to continue those divisions into the next generations.

As such, this was a very important production for the Nikkei community. A lot of people seemed to be talking about it the next day on social media.

If the objective for the movie was to tell the story to a greater American audience, then it probably failed in that purpose. The audience in the theater I saw it in was mostly Asian.

But for the folks who were there, the focus on the breaking up of families and community was a major theme that needed to be addressed. Especially to the generations in attendance that did not experience the mass incarceration, but most certainly were affected by it in some way they could not even fathom previously.

To George Takei, thank you. Allegiance is a gift to all of us.

Time to Catch a deep, deep breath, then keep moving.