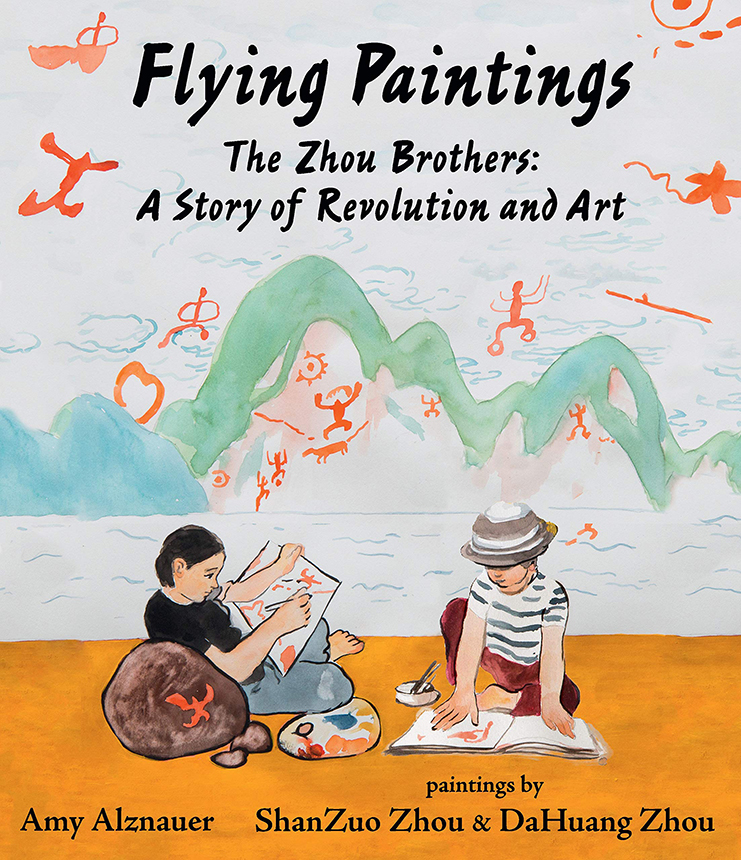 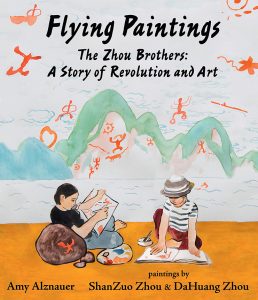 “The World is a beautiful and terrible place,” remarks Shaoli, one of the protagonists in Amy Alznauer’s picture book, Flying Paintings, upon hearing stories of the cycles of destruction and restoration of his family’s bookstore ran by Po Po, his grandmother. The duality of beauty and terror becomes a refrain in this layered, compelling narrative of the redemptive power of art and familial love.

Shaoli and his brother Shaoning grow up in the aforementioned bookstore on the tallest hill in Wuming, China, under the loving care of their tenacious and wise grandmother. As each other’s constant spirited companion and sometime playful rival, the two brothers study the art of inkbrush painting together by imitating the natural elements in their idyllic surroundings, while Po Po’s teaching — “to become an artist, you must possess the highest spirit” — becomes a formative force in their development as artists.

Shaoli and Shaoning’s happy childhood is soon shattered by the Chinese Cultural Revolution. As artists, intellectuals and private business owners face persecution, the brothers’ parents are taken away by the government, Po Po is forced to close the bookstore, and Shaoli is sent to work on Daming Mountain, separated from Shaoning.

During this time of spiritual and artistic deprivation, Shaoli is only allowed to paint the face of Chairman Mao. He finds sustenance by recalling Po Po’s stories. The origin story of the cliff paintings on Hua Mountain especially consoles and liberates him. According to legend, an artist who has followed an immortal’s bidding to paint continuously for 100 days has been rewarded when images from his canvas flew and adhered to the cliffs, where they remain until this day. Shaoli longs for the day when his own paintings would fly free.

When Po Po passes away, Shaoli and Shaoning return to the abandoned family bookstore and start to paint on its bare walls. Soon they decide to paint a picture together. Although heated disagreements arise during their collaborative process, the brothers reconcile their different visions and recognize that their shared endeavor elevates their art in a way that they cannot achieve individually. Eventually the two brothers visit Hua Mountain to learn from the wild images of the cliff paintings. As they endure the many terrible losses life has dealt them, they continue to discover beauty and freedom through art.

Flying Paintings is based on the lived experience of ShanZuo Zhou and DaHuang Zhou, world renowned artists who are also the illustrators of this book. The Zhou brothers now work from their studio in Bridgeport, Chicago. In 2011, President Obama commissioned a painting from them and presented it as a gift to Chinese President Hu Jintao.

The brothers’ artistic achievement models a way of artmaking that values creativity through collaboration. The book makes an honest and profound statement that collaboration can be a contentious process that requires self-reflection, humility and willingness to acknowledge differing perspectives. As DaHuang (formerly named Shaoning) states in the author’s note, “When you paint by yourself, you won’t have the courage to destroy your own paintings. You think you are always right. But two people work together, they don’t care. With this kind of fighting something comes out that’s never happened before. It creates a new magic.”

The book’s central idea that terror and beauty can lie side by side also serves as a timely reminder for us to maintain hope in the face of adversity.

Alznauer deftly melds the multiple aspects of the Zhou Brothers’ lives and artistic developments into a rich, engrossing narrative. The illustrations by the Zhou Brothers become increasingly energetic and expressive, mirroring the journey they have undertaken to absorb the spirit of the cliff paintings. The life lessons of the two brothers and the affecting magic of the illustrations are to be savored and shared.