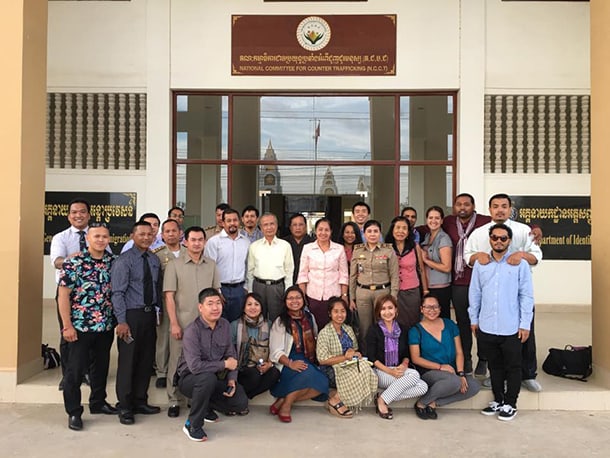 On October 17, the Southeast Asia Resource Action Center (SEARAC), a leading advocate organization for people of Southeast Asian descent, issued a press release stating that Immigration and Customs Enforcement (ICE) had initiated a mass national roundup with over 100 individuals of Cambodian heritage being detained over the last several weeks. Most of the individuals detained arrived in the United States as child refugees, escaping the Cambodian Genocide. Most had never set foot in Cambodia itself. These individuals “came into contact with the criminal justice system before their families could naturalize,” a change in status that would’ve rendered them immune to deportation according to federal immigration law.

This mass roundup follows a series of exchanges between the United States and Cambodia, which began with Cambodia’s halt in issuing travel documents necessary for individuals that the United States deemed deportable. Citing humanitarian concerns, Cambodian officials are seeking a revision to the Memorandum of Understanding (MOU) around the repatriation agreement as a reason for the halt in issuing travel documents.

“Some deportees have wives and children. Even though [they] are not American, they still have houses and families, and it [is] like taking them away from their families,” Khieu Samphan, an Interior Ministry spokesperson, told the  Voice of Cambodia. “We are only requesting for a negotiation.”

In response, the Trump administration issued a travel ban on Cambodian Foreign Ministry officials and their families. On August 24, the Washington Post reported that the United States had imposed visa sanctions on four countries, including Cambodia, in an attempt to force these countries to take in or increase the amount of deportees repatriated.

In turn, Prime Minister Hun Sen countered that Cambodia would suspend its cooperation in helping find remains of U.S. servicemen killed during the Vietnam War.

While the repatriation agreement between the United States and Cambodia has been in effect since 2002, a November 2016 meeting between the Right2Return delegation, headed by U.S.-based 1Love Movement and Cambodia based 1Love Cambodia, and Cambodian government officials changed its trajectory. A collective of representatives from the Interior Ministry, Foreign Affairs Ministry, and the Justice Ministry participated in this meeting and at it’s conclusion, a task force was formed to revisit the repatriation agreement.

“It was such a huge opportunity to be able to sit with the task force that has formed to revise the repatriation agreement,” 1Love’s Mia-lia Kiernan said in an NBC film documenting the U.S.-based advocacy groups engaging Cambodian government officials in late 2016. Kiernan’s organization decided to change tactics after years of deadlock working to change policy from within the United States. “We just basically stopped thinking about the United States as the center of the earth, right? I think that we’ve done … was basically say, ‘We’re not going to do that anymore,’ and there’s other ways to make change and that we commit to a global movement that sees strategy beyond the United States.”

Chandara Tep, a deportee, grew up in Modesto California and was part of the delegation that met with Cambodian government officials that resulted in the task force creation. “Waiting on deportation is very stressful. It stays on your mind constantly. … You will feel it in your sleep you will feel it with your families and friends,” Tep said, reflecting on how a change in the repatriation agreement may affect the psyche of potential deportees.

“I feel great about it, for all the people that potentially get to stay in the U.S.,” says Sophat Penh about the travel ban. “I just want them to stop tearing families apart.” Penh was deported in 2014 and grew up in St. Paul, Minnesota. Since arriving in Cambodia, he has been involved with Tiny Toones, an arts-based NGO supporting at-risk youth in Cambodia, and works as a maitre d’ at The Cool Lounge, a restaurant in Phnom Penh’s Tuol Tom Poung neighborhood that was created in part to help fund the work that Tiny Toones does.

When asked about how Cambodian government officials would react to visa sanctions from the United States, Penh said: “I don’t know how long it would last though because it’s affecting high level government officials.” With the recent roundup in motion, it seems as if those fears have come true.

As the latest nationwide sweep progresses, many things remain uncertain. The SEARAC press release notes that “it is unclear how many of these individuals will be deported to Cambodia.” Those caught up in the round up are being transferred to Adelanto Detention Facility in southern California with Cambodian consulate interviews currently taking place.

In reaction to this roundup, many grassroots groups advocating on behalf of potential deportees including SEARAC have created portals of resources that can help those seeking counsel on their cases.

Peter See, a Formerly Incarceration Group Healing Together (FIGHT) representative and member of the 2016 delegation, hopes governments on both sides see beyond deportation as a pawn in a geopolitical chess match, “Halting the deportation of the Cambodian refugees is a big step towards a much bigger goal,” he said. “This is not only a political issue, but an issue for (affecting) families all across the U.S.”

The following are two ways you can help:

Here is a link to the SEARAC statement: www.searac.org/new/press-release-over-100-cambodian-americans-rounded-deportation