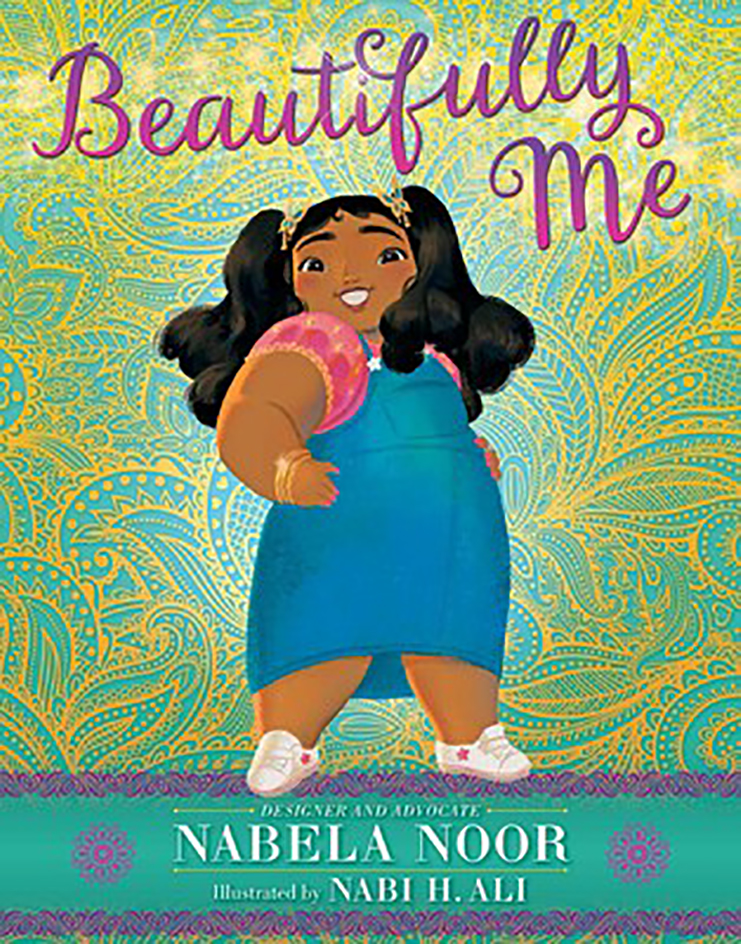 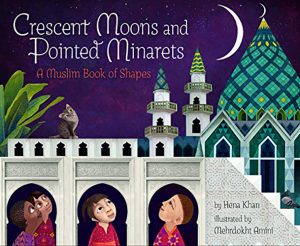 Crescent Moons and Pointed Minarets: A Muslim Book of Shapes by Hena Khan, illustrated by Mehrdokht Amini
This book is part of Khan and Amini’s series on Islamic art, architecture and culture. Amini’s art is highly expressive and beautifully detailed. She was inspired by the idea of bringing the classical elements of shapes and geometry in Islamic art and architecture into the modern setting. This book is filled with circles, stars, squares, diamonds, hexagons and octagons, layered into complex super shapes.

Khan’s words highlight oft-overlooked shapes and patterns and bring an appreciation of the common everyday things. The tip of the minaret tower of the mosque is a cone. The mosque’s ornately carved door is a rectangle, whereas the iftartable where the family breaks their Ramadan fast is an oval. The wudu fountain where people do their ritual washing before prayers is octagonal in shape, and there are diamonds on the children’s new Eid kaftans and clothes. The glossary at the back of the book explains the different Muslim words.

One Sun and Countless Stars: A Muslim Book of Numbers by Hena Khan, illustrated by Mehrdokht Amini
Amini’s artwork in this book is even more vibrant and complex as compared with the above book. There are many significant numbers in Islam, such as “five for the pillars of the religion and daily prayers and seven for the circles pilgrims walk around the Ka’aba during the hajj.”

Khan’s choice of concrete, illustratable words and images allows children to understand that there are “So many blessings in […] life, like stars that fill the sky.” The book starts out in the early morning with one morning sun and the first adhan, call to prayer. Two hands make the dua, a personal supplication, and there are five cups for tea for a weekly halaqa, Qur’an reading gathering. With figs for a predawn meal, jugs for holy water, and suitcases for the hajj in Medina, there is so much imagery of the Muslim world in these pages.

The third book in this series is Golden Domes and Silver Lanterns: A Muslim Book of Colors.

My Name is Bana by Bana Alabed, illustrated by Nez Riaz
Dedicated to refugee children all over the world, Syrian refugee, human rights activist, and 12-year-old author Bana Alabed brings a child’s perspective to one of the biggest humanitarian crises in history. Born in 2009 in Aleppo, Syria, Alabed is known worldwide for her tweets recounting the horrors of war during siege of her city in 2016. She and her family were safely evacuated to Turkey in December 2016.

“[My mother] tells me that I am named after a tall bushy tree that grows in Syria, the country where I was born. ‘Your baba and I wanted you to always be qawia [strong] just like this tree.’” With infinite care and understanding, Alabed’s mother explains what it means to be strong. Being brave when you are scared, helping other people and allowing them to lean on you, and using your voice to speak up for unfairness are some of the ways in which a person can grow up to be strong.

Believing her mother, little Alabed was glad she was mighty like the tree when war came to her country. She had to be brave when the bombs fell, and she had to comfort her scared younger brothers. She had to be courageous when she went to a country where she didn’t speak the language and was shunned by other kids at school.

She has traveled all over the world telling people her story and asking people to help kids living in war zones who don’t have access to clean water and medicine and who can’t go to school and learn. “Kids shouldn’t have to always be so strong. Every child deserves to live in peace.” She believes that kids must always have amal, hope. 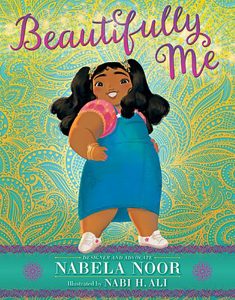 With over 10 million followers across her social media platforms, author Noor empowers and inspires people around the world to love the skin they’re in. Her work centers around her passion for representation and diversity with a commitment to promoting self-love through self-care.

Ali’s exuberant art brings young Zubi Chowdhury wonderfully alive for the reader in all her joys and worries and body positivity.

Zubi has always been happy about how she looks. Suddenly everyone around her is going on a diet presumably to look good. She wonders why is being large or fat bad? Are they not beautiful? Maybe she needs to go on a diet to be pretty? This book has a profound message: “Sometimes we can be mean to ourselves without even realizing it. And when we hurt ourselves, we hurt the people we love and who love us. A beautiful person is someone who embraces who they are and helps others do the same.” 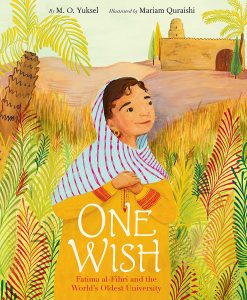 One Wish: Fatima al-Fihri and the World’s Oldest University by M.O. Yuksel, illustrated by Mariam Quraishi
The University of al-Qarawiyyin in Fez, Morocco is the oldest university in the world that has been continuously educating students since its inception in 859 CE. Built as a mosque, al-Qarawiyyin has served as a house of worship as well as an institution of higher education welcoming all genders and teaching religion as well as math, science, history, law, poetry and literature. Quraishi’s gorgeous art in watercolor and gouache is the perfect vehicle for Yuksel’s lyrical prose.

“Fatima al-Fihri craved knowledge like desert flowers crave rain. Unknown worlds open to her like a window as she read. Her passion for learning pulsed through her veins.” There was one thing she desired above else: To build a school of global scholar teachers for students of all walks of life. But how could she bring her wish about?

Throughout childhood, war, and marriage, Fatima held fast to her wish. Upon the death of her husband and father, Fatima decided to honor their memory and serve her community by using her inheritance to build a school where students, especially the poor and the refugees, could live and study for free. This was Fatima’s sadaqah jariyah, charity that was like “planting a single seed from which thousands of wildflowers” will bloom. Fatima’s one message to children everywhere is: Never give up on your dreams; we all have the power to change the world for better.