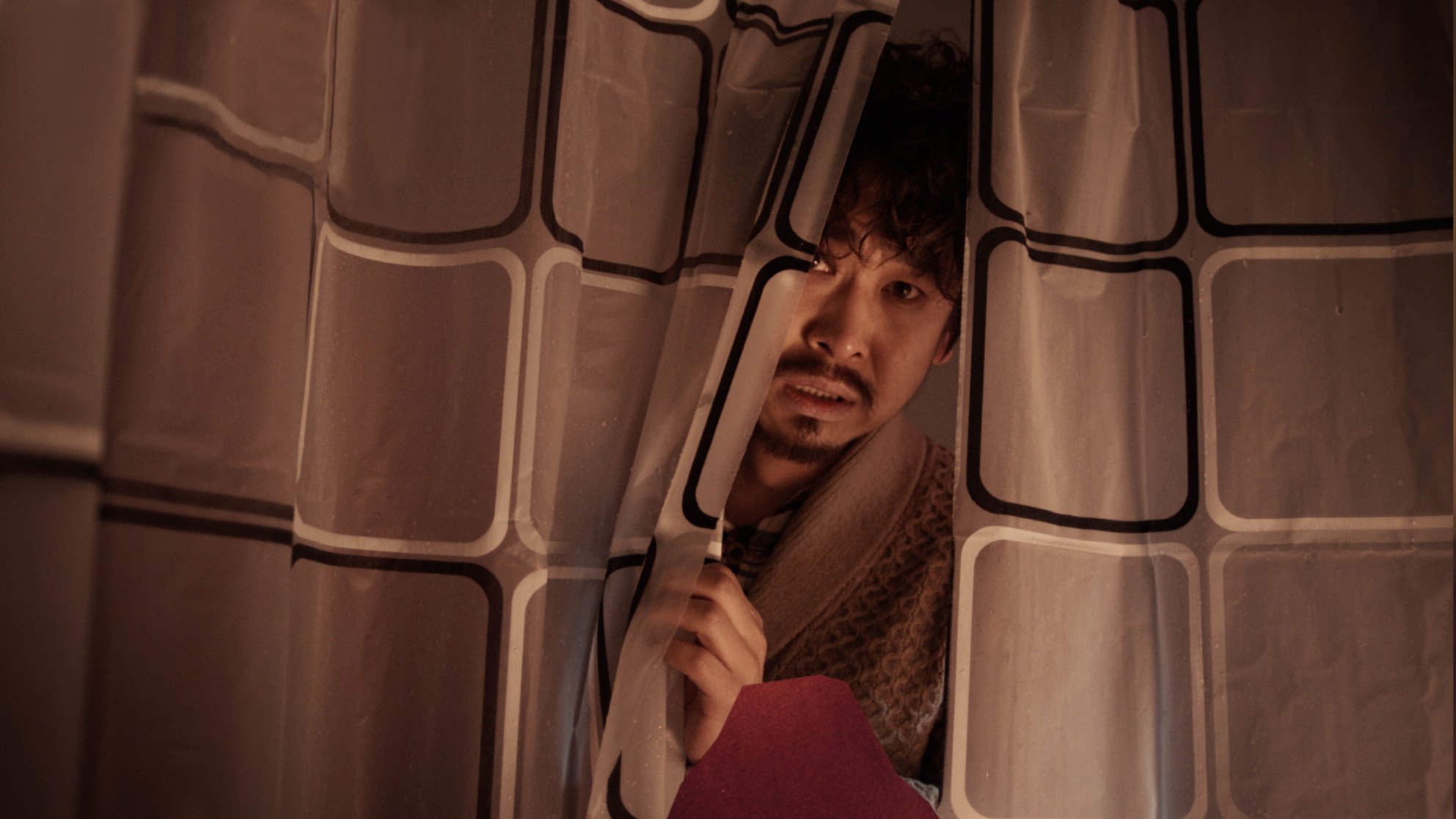 What would you do if you suspected your pretty wife of cheating on you? Divorce her?  Start all over again in a new town?

In Absurd Accident, Yang Baiwan (Xixu Chen) inexplicably does neither. Instead, he hires a professional hit man to kill his spouse. Incredibly insecure over his impotency, he plots to get rid of Ma Lilian (Ye Gao) rather than become the laughingstock among his macho friends. Not only have the aphrodisiacs his doctor prescribed fail him, but it appears his brain has flatlined, too.

Owners of a nondescript hotel and restaurant, Baiwan and Lilian live an unglamorous life in an unpretentious rural neighborhood. Like most couples, they struggle to make a living while maintaining a healthy relationship. But when two men arrive and order noodles, and Lilian ensures the bulkier one receives a super-sized bowl, they admire her good looks which further sets off her husband.

However, the inept hit man he hires ends up burglarizing Lilian’s bedroom as she sleeps after Baiwan forces her to get drunk. When the robber is accidentally killed, it sets off a chain of events that’s there no returning back from. One outlandish error leads to another, and when a police officer materializes just as Baiwan and Lilian are hiding the body in their car trunk, the farcical tempo is amped up.

A young couple on a blind date even manages to land in the middle of the drama. Arriving at the hotel/restaurant hoping to seduce his companion, the nerdish man (Bo Dong) is shocked to learn his dream date (Suxi Ren) is just a well-heeled gold digger.

The selection of 1970s funk music on the soundtrack is as startling as several black and white silent movie scenes, yet apropos for this dark comedy.

Director Li Yuhe has said that he wanted to shine a spotlight on rural areas of China that haven’t yet caught up with the modernity of its major cities. Sadly, technology begets tragedy in his portrayal of a contemporary marriage gone wrong. Warning: the English subtitles are laced with present-day expletives.

While the couple in Absurd Accident is actively uncoupling, just the opposite is happening with the duo in Once Upon a Time, a fantasy film with a heavy dose of adventure that turns into a tale of true romance.

Based on the best-selling novel Three Lives, Three Worlds, Ten Miles of Peach Blossoms, the complicated story of thousands of years-old gods and humans intermingling for peace and justice is a little difficult to follow. But the 3D production is gorgeous and the film blooms like a colorful sunset.

Hailing from the Heavenly Realms, beautiful Bai Qian (Liu Yifei aka Crystal Liu) lives in the world of mortals in order to train for her promised position as a High Goddess. But after marrying Prince Ye Hua (Yang Yang), she’s dealt a deadly blow and disappears. Now, with no recollection of her previous life, she frolics in a garden paradise with a sage who advises her on everything except how to stop chugging jugs of peach wine. And, despite clouds of blushing peach blossoms enveloping her, she chooses to stay drunk to fight off depression.

Enter the handsome Ye Hua, calling her SuSu and toting a cute kid named A Li who calls her “mom,” Stunned, and certain they have misidentified her, Bai Qian tries shooing them away. But Ye Hua insists that she’s SuSu who’s been asleep for 300 years and has forgotten that he saved her soul so they could be together again.

Except for the odd-looking nine tails when SuSu morphs into an arctic fox, most of the costumes, like the elaborate armor and flowing gowns are magnificent. When Ye Hua transforms into a black dragon, the effect is dazzling. And several battle scenes taking place in swirling mists are enrapturing.

There is an annoying green, animated-like creature, spouting nonsense, that follows SuSu around in the beginning, but by the film’s end it’s been forgotten and disappears from the screen.

Both lead actors share a chemistry that makes their affection believable. In fact, some of their romantic scenes feature long, enthusiastic kisses that are more graphic than what’s normally seen in films from China. Ultimately, beyond the glitter and gossamer wings, this is a film about love.