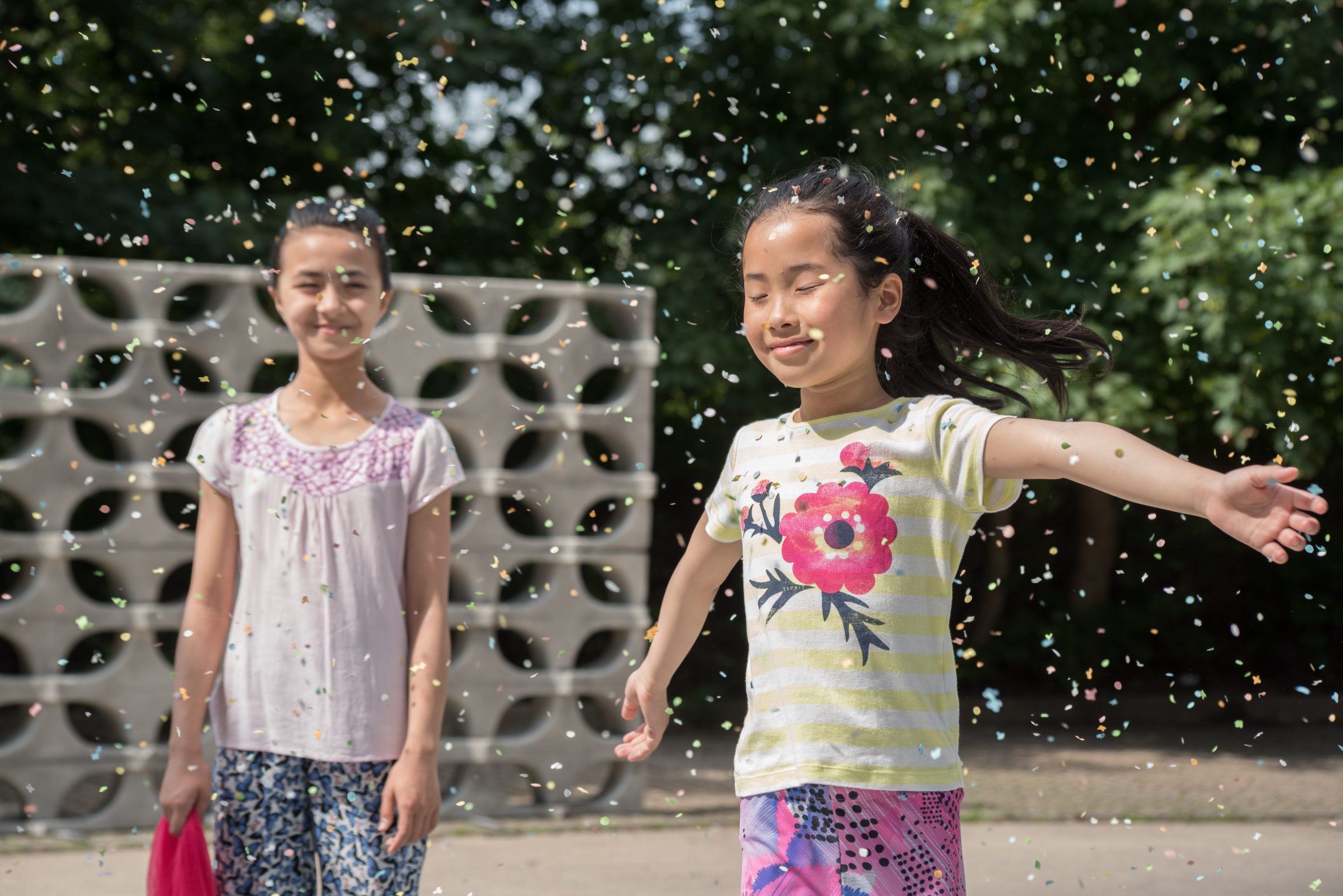 Once again, the Children’s Film Festival Seattle presents a diverse collection of movies that adults can enjoy, too. From features to shorts, narratives to documentaries, below are some offerings by or about Asians and Asian Americans.

In the feature narrative Fortune Favors the Brave, two ethnic Vietnamese girls living in Halle, Germany find themselves alone after their mother hurriedly leaves for Vietnam to care for their sick grandmother. At just 11, Linh is staunchly responsible. Her determination in assuming adult-sized tasks at her tender age is heartbreaking.

Not only does Linh look after her 9 year-old sister, Tien, but she’s entrusted with overseeing her mother’s take-out restaurant, too. Yet all Linh wants is the chance to attend high school like any other kid. Ironically, a neighborhood bully, Pauline, does everything she can to avoid school. Instead, Pauline, who is in turn bullied by her classmates, favors locking herself inside her room where she spies on neighbors with a telescope.

After noticing Linh and her sister alone for days without a parent, Pauline bribes them; promising to not report them to authorities in exchange for being allowed to hang out with the “exotic” Asian kids unsupervised by adults. What starts out as a contentious relationship turns into camaraderie as the girls begin to learn about each other’s worlds—Pauline’s spoiled, only-child, white, middle-class life versus Linh’s struggling immigrant’s reality. But despite the girls’ discretion, they’re soon followed by police and harassed by school officials.

Thao, the lone employee at Linh’s mother’s take-out, speaks no German so Linh enlists her to portray her missing mom—for awhile. Adventures galore follow the trio of girls as they interact with the Vietnamese community, including a godfather-like character who loans them money. Whether praying at a Vietnamese temple or fending off cops, the girls are in it together. Lynn Dortschack plays Linh with a total lack of self-consciousness and, in doing so, creates a completely believable character. Linda Phurong Anh Dang has the role of her younger sister and Lisa Wihstutz is Pauline. As a stern-faced pre-teen longing for a carefree life, Linh displays remarkable maturity in grasping her immigrant family’s circumstances.

German with English and Vietnamese subtitles.

In Football We Trust is a feature documentary following four Polynesian NFL hopefuls. Navigating the intricacies of recruiting exceptional high school football players to become college players, then pros, this movie was four years in the making. Focusing on Salt Lake City, Utah, a haven for Polynesian families placing their hopes on sons who play football, the filmmakers reveal the hardships of poverty and the weight the boys feel to pull their relatives from it. Surviving drugs, gangs, prisons, and more, some of the boys turn to their Mormon faith for help. Although the film doesn’t explore how that religious conversion came about for the Pacific Islanders, its co-directors Tony Vainuku and Erika Cohn interview a profusion of coaches, teachers, parents, siblings, and current and former Polynesian football players to explain pro football’s role in their salvation.

Among the live-action shorts featured at the festival are several thought-provoking films like these:

Summer with Monkey King is about a six year-old Chinese girl already learning the lessons of female disempowerment. Yearning to play the role of the legendary Monkey King at her school, she’s told by the adults around her that it’s a part only a boy could handle. Making matters worse, she overhears her grandmother praying for a boy to be born to her pregnant mother as if he will be the family’s savior. Director Ewing Luo’s compelling message is irrefutable.

A comedy, Mr. and Mrs. Kim features a California kid named Joshua who loves to draw. Unfortunately, Joshua’s Korean immigrant parents run a dry cleaner where he’s expected to help out whenever he’s not admonished to stop drawing and do his homework. Not only is school boring for Joshua, but his classmates aren’t exactly supportive either. One in particular, a girl named Harper, antagonizes him over Career Day where she shows off her television reporter father. Instead of inviting his parents to the event, Joshua tells a tall tale of their glamorous lives as spies who escaped Kim Jong-Il. This is Jaehuen Chung’s AFI (American Film Institute) thesis project, and his handling of several fantasy sequences is spectacular.

English and Korean with English subtitles.

From India comes In Fairness about a boy, Ram, who helps himself to mangos that have fallen from a neighbor’s tree. But when he’s caught by the neighbor and scolded by his mother, what Ram does next is utterly sweet and selfless.

The animated short films in the festival also include several with captivating ideas to consider:

Directors Robert Kondo and Daisuke “Dice” Tsutsumi are known for their Oscar-nominated short, The Dam Keeper, and their latest project, Moom, is just as contemplative. An astronaut oversees a field of discarded objects, but there are memories still attached to them. One by one, he, along with a lingering memory attached to a fireman’s hat, free the other memories from their objects. That is, until one day a pretty little memory attached to a pair of ballet slippers appears.

Under the Persimmon Streetlight is a colorful, dazzling and imaginative film from Taiwan about a girl visiting a Hakka village, along with her parents and grandmother. Told to keep watch over her grandmother, the little girl loses sight of her and magical things begin to happen. As she searches, the little girl encounters another little girl and an unending parade of fantastic sea and forest creatures including Meddling Monkey, Slick Crab, and a rainbow pearl.

Also from Taiwan is Little Stone Lion, a voiceless film about a baby stone lion coming to life and protecting the temple. But he’s just a baby after all, and a playful cat nearly gets the best of him.

Along with a couple of teaching assistants Xiaoguang (Lay Zhang) and Nuomin (Mu Qimiya), he’s approached by professor Ashmita (Disha Patani), who looks like she could be India’s contestant for the Miss Universe pageant. So does her assistant Kyra (Amyra Dastur) and nearly every other woman in the movie who also perform impossible kung fu and yoga feats without ever once messing up their make-up.

But Ashmita has a reason for looking like, well, a princess. She’s one in disguise. And, she wants to locate the thousand year-old missing treasure belonging to her ancestors from the Magadha Kingdom of India.

After presenting Chan with a map, she requests his help and off they go to an ice cave filled with treasures. Unfortunately, they’re ambushed by Randall (Sonu Sood), who claims the treasure belongs to his family. Fighting over a humongous violet gemstone, the opposing sides carry their battle across the globe.

Jack’s best friend’s son, who fancies himself as an Indiana Jones style of relic hunter, constantly gets in the way. Of course, he is aptly named Jones (Aarif Rahman). And, of course, he falls for Ashmita’s assistant, Kyra, who turns out to be her younger sister.

Now in his early 60s, Chan is still physically capable of some pretty slick moves. But, he’s definitely slowing down. However, that doesn’t stop him from doing an intense luxury sports car racing scene in Dubai that spills onto city streets. There’s not as much martial arts (nor yoga, for that matter) in the film as Chan’s fans probably would like, but there are lots of CGI scenes with various animals, including camels, jackals, and a car sick male lion.

Do stay for the credits to watch an energized Chan showing off his dancing in a Bollywood send-up scene.

Mandarin, English, Chinese and English Subtitles (but, strangely, no Hindi)