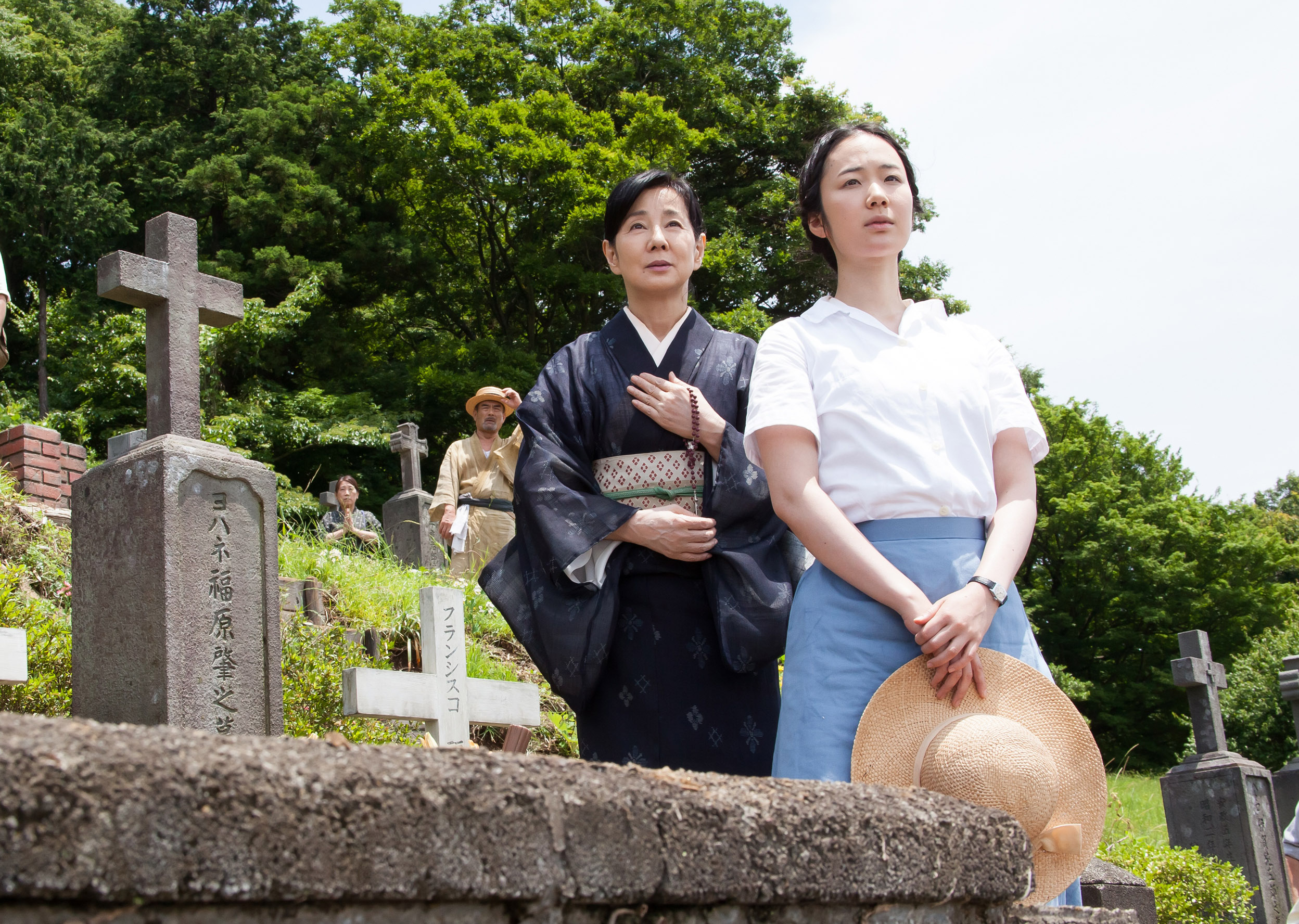 This year, Seattle’s neighbor to the south is celebrating the 40th International Portland Film Festival with several outstanding Asian features. If you like long drives and big screen excitement, then grab some wheels, head down to Portland and check out what’s on the movie menu.

Celebrated director Yamada Yoji often tackles poignant stories about Japanese citizens enduring hardships during and after World War II. Famous for his massively popular Tora-san series, Yamada is even honored with a Tokyo-area museum in his name.

Now, in his 80s, Yamada boasts a string of award-winning films like The Twilight Samurai (2002) about a samurai accountant who adores his daughters during a time when girls were scorned; Love and Honor (2006) about a samurai food taster who ends up eating poison; and, Kabei (2008) about a student who falls in love with the wife of his teacher imprisoned for speaking out against Japan’s imperialism. Continuing his examination of the aftermath of WWII, Yamada’s latest narrative is Nagasaki: Memories of Our Son.

Because of the enormous casualties Hiroshima suffered, it’s well known as the city hit by an atomic bomb on August 6, 1945. But the much smaller Nagasaki lost about half as many people when it was bombed on August 9, so remains lesser known. It’s in this seaport that Yamada sets his tragic story.

Koji (Kazunari Ninomiya) is a medical student who loves cracking jokes and bringing joy to his mother Nobuko (Sayuri Yoshinaga) who’s suffered the loss of her husband to tuberculosis early in their marriage. On an ordinary day, Koji rushes to school nearly missing his train. Sitting in his classroom, he’s attentive and engaged. But within seconds, a blinding ash lights up the sky and Koji’s ordinary day becomes extraordinary, inflicting more heartache on his mother when she learns of his death.

With the aid of Koji’s fiancee, Machiko (Haru Kuroki), Nobuko struggles through an- other devastating loss. And she continues to work as a midwife, ironically bringing new lives into the world while besieged by the deaths of her loved ones.

Hovering around Nobuko, Machiko is much-needed solace, but Nobuko worries that Machiko will miss her chance to marry because of her utter devotion to Koji’s memory. So, on the third anniversary of Koji’s death, Nobuko tells Machiko they both must let go—which brings Koji straight back to his mother in the form of a ghost. But only Nobuko (and random children) is able to see him. Certainly, Nobuko is greatly comforted to be in communication with her son again.

Interestingly, her family and community are Catholics. Nagasaki, Japan’s oldest port city, was heavily converted thanks to Portuguese Jesuits who arrived in 1549. However, by 1587, regent Toyotomi Hideyoshi fearing the political power of Christian daimyos (warlords) outlawed the religion.

Lighting candles and praying to her lord, Nobuko is satisfied that Koji will stay in her life this time, although he’s a spiritual entity. But like everything else in life, change is inevitable.

From Hong Kong comes the controversial Ten Years, a collection of five short films each envisioning a future scenario as the country approaches two decades under Communist rule. For these five filmmakers, Hong Kong 10 years from 2015 (when the movie was made) is definitely dystopian in landscape.

The first film, Extras, is shot in stark black and white by director Kwok Zune. Taking place at an International Labor Day celebration and political rally where two parties—the TMD and the Fortune Party—are vying for leadership, it features two struggling men hoping to become important gangsters in the Triad. Ordered to shoot one of the party leaders in order to create controlled chaos so the government can enact the National Security Law, the chosen shooter (an Indian immigrant) is wary and unsure if he can pull it off. The other man challenges him, begging for the opportunity to be the shooter. They even flip coins, but sadly, it turns out that they’re nothing more than puppets in a show bigger than themselves.

In another colorless short, Wang Fei-pang’s Season of the End, a curating couple save specimens of destroyed Hong Kong culture in order to prove their world once existed. Meticulously, they catalogue and preserve it all, including themselves.

Jevons Au Man-kit directs Dialect with precision and angst. A taxi driver with a young son is confused about new instructions blaring from his radio instructing all cabbies to speak only Putonghua (Mandarin), the new official language of Hong Kong. Grappling with his Putonghua-language GPS, and struggling with pronunciations, the cabbie not only loses customers who can’t understand his Cantonese, but his wife nags him to stop talking to his son in “dialect” as Cantonese has been re-labeled.

In Kiwi Chow Kwun-wai’s Self-Immolator, the angry activism of mostly youthful protesters are captured in documentary-like scenes fighting secret police and People’s Liberation Army soldiers. When an unidentified person sets themselves on re in front of the British consulate, the government demands to know their identification. That self-sacrifice follows the hunger-strike death of an opposition leader and, soon, the revolution is on.

Local Egg is director Ng Ka-leung’s chilling account of the state turning children against their parents. A grocer is warned that labeling his eggs “local” is in violation of the censor list. Concerned that his son spends too much time with the Youth Guard spying on merchants to ensure they follow rules, he takes him to his friend’s farm—the last location selling fresh eggs that will soon be shuttered by the government. Meanwhile, the Youth Guard throw eggs at the store. But the man’s son has been reading banned books and is not as naive as he feigns.

These powerful films and more await you, southbound on I-5.