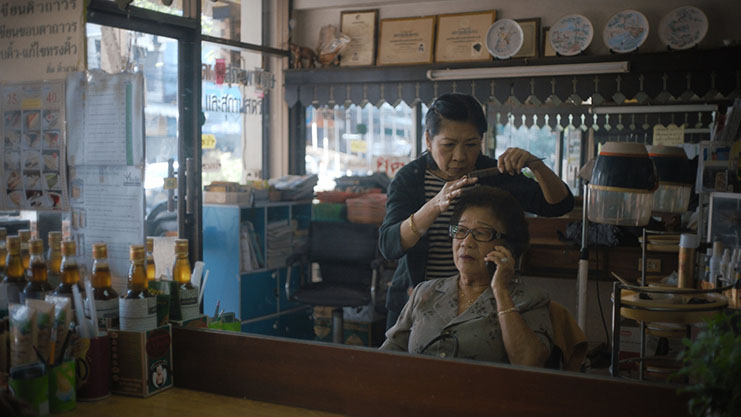 Grandmothers are, for most of us, symbols of strength, family and heritage. This is particularly reflected in Yai Nin, a 12-minute documentary film that Champ Ensminger created about his yai, or grandmother, Ninlawan Pinyo, who founded and runs a successful naem (pork sausage) business in Thailand.

Widowed many years ago, Pinyo built a business that would not only earn her a living, but could also help her children emigrate to the United States. “My grandmother tried many different products to make and sell, and refined her process around naem because of the demand in the region,” Ensminger said. “People of my grandmother’s generation have it often as a centerpiece dish, but outside the region it is a versatile ingredient in other Thai dishes because of its sour profile.”

Ensminger was born in Chiang Mai, Thailand, and raised in Spokane, Washington, but he returned to Chiang Mai in 2013 after earning a degree in film studies at the University of Washington. “My return to Chiang Mai in my mid-20s was for many reasons,” he said. “I wish I could say all of them were as noble as a mission of self-discovery through my heritage.”

At first, Ensminger experienced culture shock, but then he discovered Documentary Arts Asia, a nonprofit focused on photography and documentary film. “The people I would meet and the work I would see there, Asia-based photojournalists exhibiting their work around humanitarian issues in the region or screenings centering around cinema outside the United States, was in its own way a hall of mirrors to see myself,” he recalled. “I began living vicariously through the work of Apichatpong Weerasethakul, Wong Kar-wai, Mira Nair and Hayao Miyazaki.”

This step away from the American film industry helped Ensminger replace his own self-doubt with confidence. “Being in my birthplace really cemented a lot of that validation, and with documentary filmmaking especially as a vessel for the outsider looking in, I felt like I had a vantage point in communicating my cultural background to a Western audience,” he said. “From producing informative Thai culture pieces for a travel website, to adapting a Thai ghost story for an American music video, I was growing into the role of filmmaker as translator.”

At the same time, Ensminger also became more connected to his Thai heritage. “Like the rest of our family, my grandmother speaks in kam muang, or a Northern Thai dialect that shares linguistic roots with Lao as well as Central Thai spoken in Bangkok,” he said. “My family history traces roots in the isolated hill tribes that ignore the borders that differentiate modern Thailand, Laos and Burma.”

This immersion was clarifying for the filmmaker. “Growing up with extended family in Spokane while being in close contact with our family in Chiang Mai, it was tricky parsing out what was Thai in a generalized Western sense and in our Northern Thai distinctions,” he said. “The combination of my time spent with my grandmother while living in Chiang Mai and the process of making the film years later really contributed to framing my family around our regional specificity.”

Ensminger considers Yai Nin to be a capstone of these experiences in Chiang Mai. “I think these nuanced depictions of Thai culture are important to preserve, when years of nationalism has attempted to consolidate Thai culture into one thing,” he said. “It was important for me to depict the Venn diagram of our Thai experience, and what Thainess is to us, with my grandmother as our best example of this nuanced identity.”

The biggest challenge, he reports, was time. “Documentary filmmaking at its best takes years and years of groundwork with your subject,” he said. “For Yai Nin, we had three days to film.”

Ahead of filming in December 2018, he prepared by conducting pre-interviews and writing a script. “It was important to get my grandmother’s daily routine captured with as many unique locations as we could fit in, while juggling logistics and my grandmother’s own busy schedule,” he recounted. “Thankfully my grandmother had the time and energy to spare during those three days, and we got her hair done at her salon first thing, which is a very important first step. If your subject’s hair isn’t ready, then nothing is.”

Then Ensminger took his time during post-production. “The benefit of not having a time constraint is being able to address my questions about the documentary in the editing process that I wouldn’t otherwise have the time,” he explained.

Yai Nin has mainly been seen on the U.S. film festival circuit, but of course, Ensminger’s grandmother got an early peek. “Yai has a limited number of English phrases in her language rolodex,” he said, “but I think I remember her saying, ‘Cool.’”

This was an important endorsement for Ensminger. “For the Asian American especially, justifying your work that doesn’t fall into a familiar trade to your community is a struggle you might have your entire life,” he cautioned. “An important thing that’s dawned on me, in making a personal film about my Thai family, is that now that the camera is pointed at ourselves, our community can see themselves in my work and believe what I already know in my heart is true.”

And Ensminger is gratified to share that knowledge with U.S. audiences. “The Seattle Asian American Film Festival in February 2020 welcomed our world premiere with open arms, and the award for Best Documentary Short,” he said. “Our premiere with SAAFF, and the outpouring of love for the film from the Asian American community in Seattle, really set the tone for the rest of our festival run.”

This experience helped Ensminger finally begin to build roots in the American film world. “I connected with so many other Asian American filmmakers at virtual panels and Zoom hangouts,” he said. “It’s not far off from my experience in Chiang Mai and Documentary Arts Asia, with like-minded artists celebrating their own Asian diasporas, and building community in whatever ways we can.”

For Ensminger, this means Yai Nin has been a success. “After two and a half years of slowly molding the film, calling in favors from friends, and developing a community around the festivals,” he said, “I’m happy to say that I wouldn’t change a thing.”

And what else would make this entire experience perfect? “With family weddings and graduations happening without my grandmother’s presence due to travel restrictions,” Ensminger mused, “I think our family is plotting revenge against COVID with a reunion with her and our family in Thailand as soon as it’s possible.”

This kind of travel had been easier in prior years but has become monumental due to COVID-19 restrictions. “I think a lot of immigrant families have known for generations what it is to maintain long distance relationships, and the pandemic has forced that experience on everyone else,” Ensminger said. “Right now, a visit to your grandmother is a sweet, hard-fought victory.”