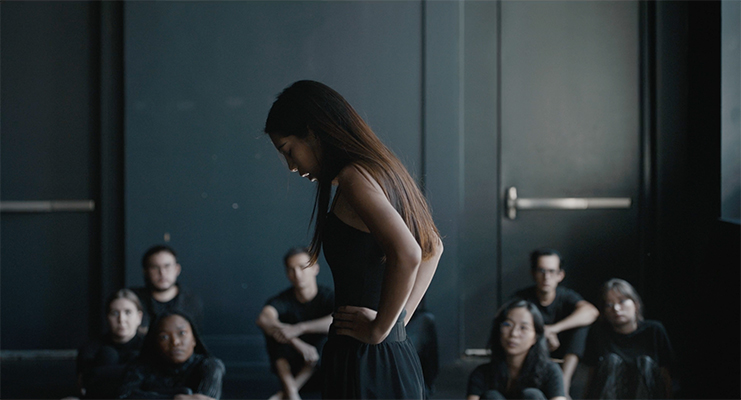 The 40th edition of the Vancouver International Film Festival (VIFF)  ran from October 1 – 11 this year, and I was lucky enough to view some amazing films during the festival. The following reviews highlight the films that stood out for me.

Ayumu Watanabe’s feature-length  anime Fortune Favors Lady Nikuko is a love story of a different kind, between a loud, life-loving mother, Nikuko (voiced by Shinobu Otake) and daughter, Kikuo (Cocomi) who is different from her in every way. Alternating between whimsy and realism, the film is strongest when focusing on the mother-daughter relationship as they adjust to a hardscrabble life in a crumbling seaside town in Osaka.

Kikuko resents the disruptions that occur after her mother’s frequent failed relationships as it typically results in them moving. The film threatens to bog down when Watanabe turns his focus on Kikuko’s attempts to fit in at the new school and the spats between girls and the weird-annoying behavior of middle-school boys.

But perhaps the film’s depiction of Nikuko as simple and with unsophisticated appetites is perhaps the most damning weakness in the film. A large woman, she is presented as loud and child-like. Nikuko’s appetite for pleasure, whether for food or her loser boyfriends, makes her an object of ridicule in the town.

While pointing to what the film wants to show as Nikuko’s many failures–weight, poverty, bad relationships–it’s possible to see her zest for life as expressing an elemental truth; life is hard, grab what brings you joy. And so, the ending of the film which circles back to Nikuko’s early years reveals how the saying that fortune favors the bold highlights the riches in her life.

Lee Seung-won’s Three Sisters is a story of siblings with diametrically opposite lives showcases stunning performances of the lead actors in this ensemble piece. Hee-sook (Kim Sun-young) is  heartbreaking as the eldest sister, and owner of a sad, little flower shop. Constantly apologizing, she finds relief from careworn existence by secretly cutting herself. Mi-yeon (Moon So-ri) is the wealthy middle sister with the seemingly perfect life that slowly unravels as her steely control over her family undercuts the happy family facade she displays to parishioners at the church where she is choir mistress. The youngest sister, Mi-oak (Jang Yoon-ju) is an alcoholicl has-been playwright who ignores her timid husband and angry stepson in her desperate pursuit of fame. Her flamboyant, out-of-control personality hides a woman deathly afraid of life.

What initially appears to be a family melodrama steadily darkens into a wrenching story about the family secrets that began in childhood and its corrosive effects.

Haya Waseem’s debut feature Quickening’s  purposefully opaque style refuses easy access into the psychology of Sheila (Aroog Azeem) a Pakistani Canadian woman in her first year of college. Sheila chafes against the strict rules laid down by her mother but still manages to enjoy the freedoms of young adulthood. After a love affair unravels, Sheila finds herself unable to cope. She can’t even confide in her parents who suffer their own breakdown with fights that become more and more acrimonious.

The dreamy cinematography and elliptical performances work so hard to keep Sheila at arm’s length that, unfortunately, when the extent of her alienation becomes apparent, it’s hard to care too deeply.

Arthur Jones’ documentary film The Six tells the story of Chinese laborers who survived the sinking of the Titanic. An international team led by Steven Schwankert uncovers the story of the men, painstakingly piecing together their arrival in New York harbor in rescue boats to their travels later to the UK, Canada and the US. Because the Chinese Exclusion Act was still in effect at the time of their rescue, the six were unable to land in the US and instead worked on steamships until they found their way to the country in search of better opportunities for their families.

Schwankert and his team describe how the Titanic had listed the six on a separate manifest, the Alien Passenger List, with their profession as seamen. They suggest in the film that the passengers, being experienced sailors, got off the ship quickly when it became clear to them that theTitanic was taking on water. The film movingly describes the fate of the men whose lives speak of the necessity of invention and reinvention in order to survive.