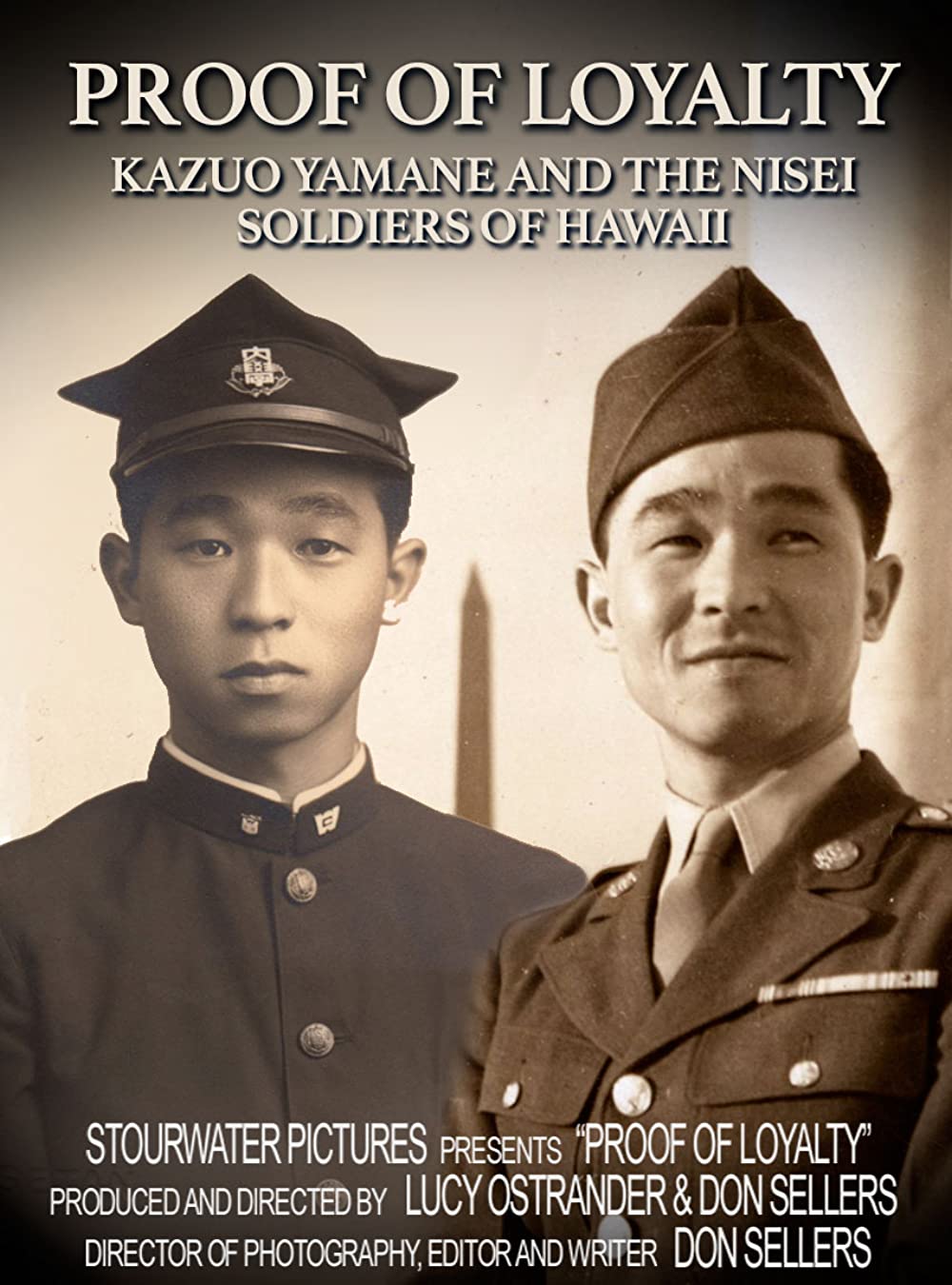 From the complex history of Hawaii, our 50th state, comes this unique story of the struggle to combat prejudice and find one’s rightful place in this nation. “Proof of Loyalty: Kazuo Yamane and the Nisei Soldiers of Hawaii” tells the story of a Japanese American who played a crucial strategic role in World War II. Adrian Alarilla talks with filmmakers Lucy Ostrander and Don Sellers about their very timely and important film.

How did you come upon Kazuo Yamane’s story, and why did you feel compelled to make a documentary about him?

Our previous film, Honor & Sacrifice, told the story of Roy Matsumoto, a second generation Japanese American born in Los Angeles who joined the Military Intelligence Service in WWII. Kazuo Yamane’s daughter Joyce, who lives in Edmonds, saw Honor & Sacrifice and contacted us to see if we would be interested in her father’s story. Her father had a unique and important service in the war, but it was not until we started to understand the context of his service, and the little known, but extraordinary role that the Nisei from Hawaii played in defending the country during the war, that we realized a film had to be made.

We have produced a number of films about the Japanese American experience during World War II, but always from the point of view of those who lived on the west coast of the mainland. The experience of those of Japanese ancestry who comprised nearly 40 percent of the population of the Hawaiian Islands when Pearl Harbor was attacked was completely different from the experience of those here.

Many Nisei who became translators and interrogators with the MIS didn’t join with an extensive knowledge of Japanese. As Americans, they spoke English. The Japanese they picked up at home and in the Japanese language schools many begrudgingly attended had to be augmented by MIS schools before they could be deployed. Most of them eventually worked behind American lines, interrogating prisoners, or monitoring enemy communications.

But because of Kazuo Yamane’s exceptional facility with Japanese (due to the unlikely fact that Kazuo was educated at the university level in Japan just before the war), he took a route that was unique in the MIS, and his contribution to the war effort was similarly distinct. He was one of the first four Nisei assigned to the Pentagon as translators. From there, he was moved to a secret facility in northern Maryland, Camp Ritchie, where captured enemy documents were pored over for hidden secrets. It was there that he identified a previously overlooked document that proved to be invaluable in understanding the state of Japanese armament production.

Kazuo Yamane had one of the most unusual careers of any Nisei in World War II. From guarding the Hawaiian beaches after Pearl Harbor, to training with the 100th battalion at Camp McCoy, to serving at the Pentagon and Camp Ritchie and then serving under General Eisenhower, no other Nisei had a comparable experience during the war.

How did you go about making this documentary?

We felt that this particular story could not be told adequately without understanding and portraying the unusual history of the Japanese in Hawaii, and the unique contribution that the Nisei from Hawaii made during World War II. The context was everything, so we put in almost a year just doing research on the story. We discovered a tremendous amount of information that we had no idea about, which provided the necessary background to understand the significance of the different elements of the story. We also realized how language would become an important theme throughout the documentary, as the language skills of the Nisei became a powerful secret weapon.

After the basic research we began to seek out and identify experts who could act as on-camera interviewees in the film. At the same time, we began to form a sense of the narrative of the film, how it would hang together as a complete and satisfying story. Our films provide a lot of historic information, but we try to do it within the context of a compelling narrative.

We used a generous amount of archival footage and images. Some were easier to find than others. Some were more generally available and some, like many of the family photos, have never been seen publicly before this film. We began with photos that Joyce Yamane had of the family. They had kept many photographs starting with her father who began as a small businessman in Hawaii. Kazuo kept photographic albums during the war. So we had a wealth of material to start with there. For archival footage, we have done decades of work with the National Archives outside of Washington, DC. We made some early research trips out there and we hired researchers to look in particular areas. One great source of fairly old footage was taken by the Ford Motor Company for early travelogues. We had used some of their footage before of the Puget Sound mosquito fleet in a film we did about Thea Foss, who started the Foss Tugboat Company. Ford Motors had taken a couple of sets of footage from pretty early in Hawaii, some of which included Japanese immigrants.

But the most invaluable source of footage proved to be from a film that had been originally suppressed that was produced by John Ford called December 7th. The story of the making of this film is fascinating and somewhat amazing, and is recounted in the book Five Came Back, by Mark Harris. Ford, like a number of Hollywood directors, worked to produce informational films for the War Department. After Pearl Harbor, he sent Gregg Toland, the cinematographer known for his groundbreaking work on Citizen Kane, out to Hawaii to make a film about Hawaii and its preparedness for the war. The film Toland created centered on the question of the loyalty of those of Japanese ancestry and the 82-minute final cut was immediately censored by the War Department down to 32 minutes, and that won the Academy Award. We used the uncut version, which is a very odd film, as a source of much good footage.

How was your film received in previous film festivals? How did audiences react?

The film has been well received at festivals. We were honored that our premiere at the Asian American International Film Festival in New York City garnered the Audience Choice Award for Documentary. The most moving responses have been from the children of the Nisei who served in World War II. We were honored to participate in the Hawaii International Film Festival with two packed screenings. In one of them, we had six Nisei veterans from the 100th Battalion attend. Afterward, dozens of people approached us to tell of their father’s story in the war. All of these men fought prejudice to bravely serve their country, and each one has an interesting and moving story. It’s a privilege for us in our small way to be able to keep their history alive.

How relevant is this film today?

Our film is about immigrants and their children, and the sacrifice they make to defend and serve their new country. But it is especially about language, and how keeping the traditions and the language of newer arrivals to our country alive actually provides a reservoir of strength in difficult times. We believe that instead of seeing a new immigrant culture as something alien that should be quickly assimilated, the diversity should instead be celebrated, because there is strength in that diversity, and some day the country may need that strength to survive.

This is what happened with the Nisei. Just before World War II, when the War Department began to plan for a war with Japan, they sent out a survey team to university language departments to ascertain how many Japanese translators would be available. The answer staggered them: practically none. At that point they realized they had to trust the Nisei, who of course were American citizens, to provide that capability for them. No one will ever know how much shorter the war in the Pacific would be, and how many lives would be saved because of the reliance on the Nisei, but their contribution and sacrifice were enormous there and also in the combat role of the 100th Battalion and the 442nd Regimental Combat Team. We need to keep this history in mind when some would turn away people from our shores. If we keep them out, perhaps the biggest loser is not them, but us.

What’s next for your film?

We are continuing with more festivals. We’ll be screening it at the Everett Film Festival on February 17th, the Seattle Asian American Film Festival on February 23rd, the Nichi Bei Foundation’s Films of Remembrance event on Feb. 24th in San Francisco and then at the Sedona International Film Festival the following week. We have had screenings on Hawaii Public Television and hope we can generate some television screenings on the mainland. The people of the mainland could benefit from understanding this rich and important history from our 50th state.

Catch “Proof of Loyalty” at the Northwest Film Forum on Friday, February 23, at 9pm.