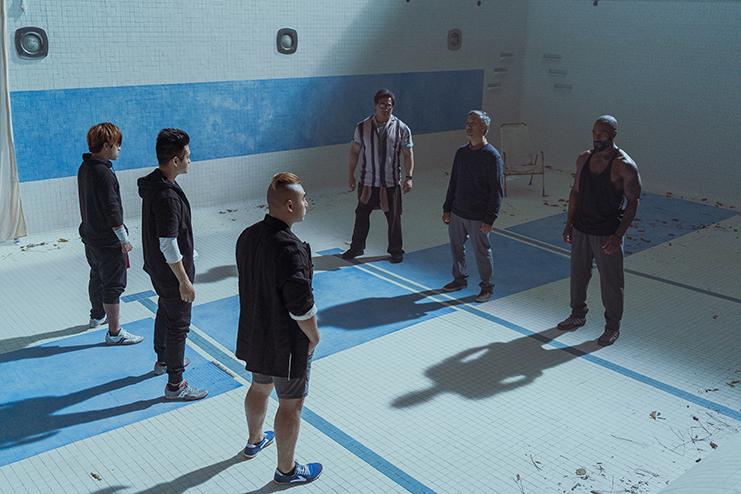 Bao Tran, director and writer of the much-anticipated film The Paper Tigers, was on the rooftops of the International District on September 7, trying to squeeze in as many night scenes and sequences as he could with his crew before the break of dawn the following day, but something unexpected happened that would derail his plans for several hours: a thunderstorm.

This is the thunderstorm that delayed the Huskies vs. California Bears game until 10:30 PM. The Washington State Fair in Puyallup had even been forced to shut down early. During the storm’s five-hour duration in the area, 2,200 low-to-ground lightning strikes were recorded, which averages to about eight strikes per second. Western Washington was inundated with rain and even hail in some areas.

With such an extreme weather challenge, Tran was forced to suspend filming for several hours, pack and remove all equipment, and hunker down low with his crew until the storm passed. Already behind schedule, Tran was feeling the pressure as the six shooting weeks he had to complete the film dwindled, but Tran was never worried he would get the job done, even with the weather hiccup, because of the faith he had in his team.

“I wasn’t worried because I just knew I had a great team that could pull it off. They were just confident in what they could do and were able to do it well,” he said. “I never felt like I was alone, like I had to do things by myself, or that everything was against me. I just knew everyone had each other’s back in that sense, so it was a challenge we all faced together.”

Despite all its challenges, Tran is eager and confident to show the world the scene that caused him so much stress. “I think people will be really stoked to see how that scene comes out because it was really fun,” he continued. “It was fun and stressful to shoot, but I think it looks great, and I’m really happy at how it turned out.”

Looking back, Tran feels an overwhelming sense of gratitude as the city of Seattle and the Greater Seattle Area embraced his team and made contributions in more ways than one to help make it possible for them to produce a feature film on a shoestring budget that has been eight years in the making. The City of Shoreline’s film office helped facilitate and provide locations to shoot, such as Richmond Beach and Fircrest Residential Habilitation Center, which had an empty swimming pool they used to shoot one of their scenes.

Three of the six shooting weeks were spent “popping in and out” of Chinatown and the International District. Organizations from the Wing Luke Museum to the Nisei Veteran’s Committee and food establishments from Dynasty Room to Hood Famous Cafe + Bar were all generous about providing food and space to help make filming possible while keeping the crew powered up and running.

“The community was really rallying and wanting us to succeed, so that is something that we really want to do right by them; we want to be able to show what community in this city looks like for the world,” said Tran. “We want to make sure this movie is seen by the world and not just around here, so this is a good time to show what Seattle’s like.”

An example of the rallying support came from the Nisei Veteran’s Committee. Producer Yuji Okumoto’s longstanding ties and support to the Japanese American community and Nisei veterans came back tenfold to The Paper Tigers production as the committee opened its memorial hall for the team to shoot its scenes. Because the space had a basketball court, a parking lot and an open area downstairs, the site became an invaluable place to get many of their scenes shot in one day. When shooting ended up taking longer than expected, the person who was managing the space decided to cancel ongoing family plans that had been set three or four months in advance just so he could keep the space open for them.

“It’s a lesson that bears repeating, but the more you give away, the more you get back,” said Tran. “It’s an artistic rule that I see validate itself over and over in even more ways because you have to be able to welcome everyone’s collaboration. Everyone is trying to make the best movie. There’s no way we could have made this movie without that energy and inspiration.”

That wave of support came almost at the eleventh hour as they scoured the city for the perfect Americana diner Tran had in mind to shoot a scene. Although a dime-a-dozen on the east coast, it was harder to find what he was looking for in the Seattle area. Two days before they were set to shoot, they found Countryside Cafe, a Vietnamese-owned diner in Burien. The owner, James Le, was happy to let them use the facility while he went off to watch a Seahawks pre-season game, but he ended up skipping the game altogether, opting to watch them film instead. Le and one of his friends were later found at the bottom of Lake Washington early in October about a month after they were reported missing.

“It’s a very heavy and dramatic thing, but what can we say but thank you?” said Tran. “I hope we can do his life an honor and pay it justice by making the best movie possible and showing the community and support that it took to make this. If it were under better circumstances, he would be able to see the movie, but this movie is much bigger than us, and there’s just us helping each other out in the moment that we can. I hope we can make a film that he’d be happy and proud of.”

Seattle’s Northwest Film Forum, a nonprofit organization with 501(c)(3) status, was a fiscal sponsor for The Paper Tigers. Executive director Vivian Hua also accompanied the team as they went on their fundraising tour early on in the year and moderated at small events geared towards Asian American audiences that were held at tech companies to drum up support and spread the word about the film. Starting with Microsoft, they moved on to Google, Facebook and local companies such as Tableau Software and Gravity Payments.

“We went with the flow with that one. It was like an interesting spring talking tour we didn’t anticipate, but it was an opportunity to tell a story of representation and diversity from our industry’s perspective,” said Tran. “There’s a lot of overlap with tech, where they’ve identified similar struggles, so it was a nice conversation between both industries.”

Now that shooting is done, Tran and his team are hard at work at their Shoreline base, a space that used to be the city’s police department. The never-ending collaborative process continues as they are faced with the task of figuring out the narrative, editing, and incorporating sound and visual effects, color and music. Tran has his sights set on the 2020 festival run and aims to finish post-production around March. Once production is completely done, Tran needs to focus on marketing outreach and spreading awareness.

“The work of the film is just beginning at that point because it’s one thing to make a movie, but if no one watches it, it’s kind of pointless,” he said. “Around March, we’re sending the bird out to fly, and we’ll see where it goes.”

Although mum about the specific festivals he’s hoping to enter, he seems keen on giving back to the Asian American community at large for their support over the years and hopes to show his film in the various Asian American film circuits, including SAAFF. A lot of thought needs to be put into the audience and who would come to see the film.

“It’s about finding the right home for it,” said Tran. “It’s one thing to get the marquee festival, but if you’re not able to get the eyeballs or the attention, then that’s unfair to the work we’ve done, so we’re very mindful of the type of supporters, partners and exhibitors that we want to have. It’s very much in our hands in that sense.”

The bigger question is where they would want to show their world premiere. “That’s the more pressing thing we’re going to have to figure out,” he said. “That’ll dictate where we strategize our distribution.”

With Asian films making a recent impact starting with last year’s Crazy Rich Asians to this year’s Parasite, Tran doesn’t want to dwell too much on how his film will contribute to the big picture of modern Asian American film in the 21st century.

“That’s a big question, and I’m not even sure if it’s for us to say,” he said. “We just want to be a fun movie that people can laugh and cry over and be able to tell their friends to see as well. I want people to enjoy it and spread the word. For us, word of mouth is going to be really important. We will rely a lot on people being able to share the word about the film.”