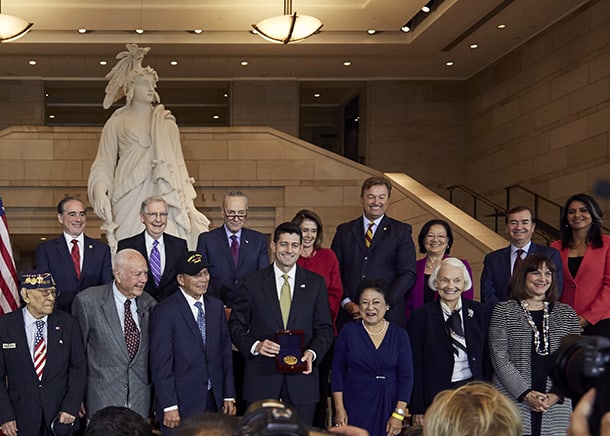 U.S. history is full of broken promises made especially to people of color. Last week, Congress took another step in the right direction to make good on a promise to 250,000 Filipino World War II veterans who fought alongside U.S. Armed Forces in the Philippines. I was honored to be amongst those in attendance with my niece and nephew to receive my father’s long awaited recognition and medal. In all, over 30 people made up the Washington state delegation led by retired Brigadier General Oscar Hillman, Thelma Sevilla, and Zenaida Crisostomo Slemp.

In a moving and emotional ceremony on October 25, members of Congress presented the Congressional Gold Medal (CGM) to these veterans, 70 years after the promise to treat them as U.S. veterans, with full benefits and U.S. citizenship, was rescinded by Congress and signed by President Franklin D. Roosevelt. The CGM is the highest civilian award presented by Congress, along with the Presidential Medal of Freedom, awarded to persons “who have performed an achievement that has an impact on American history and culture that is likely to be recognized as a major achievement in the recipient’s field long after the achievement.” Speaker of the House Paul Ryan (R-WI) referred to these veterans as “great liberators” and in presenting the medal stated that, “Let this ceremony serve to ensure that those who fought for freedom are never forgotten and are always remembered.” Leadership of Congress presenting also included House Democratic Leader Nancy Pelosi (D-CA), Senate Democratic Leader Charles Schumer (D-NY), and Senate Majority Leader Mitch McConnell (R-KY).

Senator Mazie Hirono, Democratic Senator from Hawai‘i and sponsor of the bill that resulted in the CGM detailed the long road for recognition of the Filipino veterans. She concluded that, “Their story of struggle and perseverance have touched so many of us in Washington, and that’s why so many of us fought so hard to award the Filipino veterans of WWII the CGM. … It is our responsibility as public servants and Americans to honor each veteran in the same way that they honored our country.” Hirono acknowledged the role of the late Senator Daniel Inouye, a WWII veteran who served with the Japanese American 442nd U.S. Regimental Combat Team, in championing the Filipino Veterans Equity Compensation Act that resulted in monetary payment to these veterans for their service.

Representative Tulsi Gabbard from the 2nd District of Hawai‘i and prime sponsor of the house bill for the CGM, acknowledged the grassroots movement that led to the CGM. She recognized Retired Army Major General Antonio Taguba, whose father was also a WWII Filipino veteran, the Filipino Veterans Recognition, and Education Project, and families of the veterans.

However, it was 100-year-old Filipino veteran Celestino Almeda who captured the hearts and minds of those at the Emancipation Hall ceremony in the Capitol and received a standing ovation when he announced his name and age. Walking from his wheelchair armed only with his cane, Almeda climbed the steps to the podium assisted by a soldier. With his head barely visible, Almeda’s strong voice spoke for the handful of live veterans and the many who could not be there and those who had passed away waiting for recognition.  “After the war, thousands of us felt underappreciated and unrecognized for fighting for our country. I wondered why and what else could we have done in defeating the enemy, in defending the United States of America and bringing victory during a long war in the Philippines. But we stand loyal to our country, relied on our faith and prayer. We thank the lord for watching over us during this long ordeal,” Almeda stated. Almeda’s own petition for veteran’s benefits was just recently certified by the Veterans Administration after long being denied because of insufficient evidence of his service. Veterans Affairs Secretary David J. Shulkin told the audience at the CGM ceremony that he directed his staff to review the records and decided to award Almeda the one-time payment of $15,000 under the Filipino Veterans Equity Compensation Act.

The CGM ceremony was followed a couple of hours later with the awarding of individual bronze replicas to 21 live veterans, ranging in age from late 80s to 100 years old, and close to 400 medals to attending families of deceased Filipino veterans. Dean Delen, who was on our bus, carried out his service in Batangas, Philippines and had just celebrated his 92nd birthday. He was accompanied by his proud grandson and daughter. Delen traveled from San Francisco but had also lived for many years in Puyallup, WA. As he descended from the bus, he waved to all of us and said in his native tongue, “God bless you and God bless all of this country.”

Amongst the live veterans honored were five women. Petra Ruiz traveled from Oklahoma with her two daughters Maria Ruiz and Grace Pascuale. Petra was only 14 years old when she volunteered for a Philippine-type ROTC. Her daughter stated that Petra’s choices were glee club or the ROTC program—Petra decided she didn’t want to sing. At age 15, the war broke out and Petra served as a nurse taking care of the wounded. Petra never talked much about the war and her experiences, according to her daughters, and as I talked with family members of other soldiers, I surmised this was common in most veterans’ families. One can only imagine the trauma that these soldiers, most in their teens and early 20s, suffered.

The medals presented at the individual awards ceremony only represented a fraction of the possible recipients. Many veterans were too fragile to travel and so regions around the country will hold local awards ceremonies. Most Filipinos know very little about the awards. The waitress at the Ritz Carleton Hotel’s espresso bar wondered why there were so many Filipinos in the hotel. After one of the organizers of the event told her about the CGM, she revealed that her father was a WWII Filipino veteran, a Purple Heart Medal awardee, and that she was able to come to the U.S. because of his service. Another woman, Blesilda Lim from Maryland, found out about the CGM ceremony a week before and successfully pleaded with Taguba and other organizers to allow her father to attend and receive his medal.

The ceremonies were attended by over 600 people and while most were joyous at the occasions, I am still haunted by Maria who was seated at our table. As the evening banquet proceeded, Maria placed her father’s picture on the banquet table and stared at it most of the evening. She told me her father, Rafael, passed away in September at the age of 94. All evening I knew what was in her mind and towards the end of the evening we embraced at the back of the room crying—saying to each other how we missed our fathers and that we wished they were here. It was a bittersweet victory as it had taken so long and her father did not live to see a promise made good. Only about 16,000 to 17,000 Filipino WWII veterans are still alive. Each day their numbers dwindle.

U.S. history is filled with broken promises. On my last day in D.C., I went to the National Museum of African American History and Culture. I read that during the 1776 American Revolution, the Patriots promised the slaves their freedom if they fought side by side with them. But as we all know, the slaves were not given their freedom until almost 100 years later and they are still fighting for their 40 acres and a mule.

For more information on the Filipino WWII Vets, visit www.filvets.org or contact Region 8 Coordinators for the local awards ceremonies.