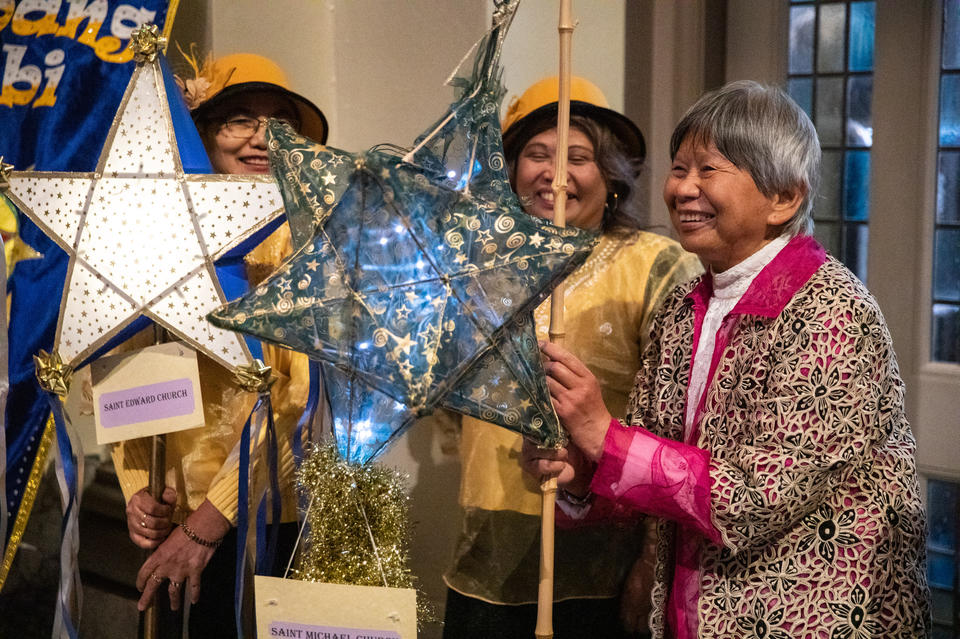 (This story was originally published online in Crosscut on December 13, 2022 and is republished under Crosscut’s republishing guidelines. Crosscut is a service of Cascade Public Media, a nonprofit, public media organization. Visit crosscut.com/membership to support independent journalism.)

For some Filipinos, COVID took some of the light out of their Christmas celebrations by scaling back their Simbang Gabi tradition. The celebration at St. James Cathedral commences the start of a nine-day series of Masses that commemorate the birth of Jesus Christ and is meant to honor the Virgin Mary.

Because of the lingering pandemic, St. James Cathedral did not make the Commissioning Mass open to the public last year. About a quarter of the people allowed to attend in previous years were permitted at the Mass, with the remaining worshippers marking the tradition virtually.

For Ed Jose, coordinator of the North Seattle Deanery, it was one more reminder that not everything was back to normal last year.

“The Filipinos love getting together, [and] a Catholic Mass is one of the ways that we do it, especially during this time of the year,” said Jose, who relishes in the tradition.

This year’s attendance, back up to about 600 people, made it all the more meaningful a celebration for him and others like Deacon Carl Chilo, the director of multicultural ministry for the Archdiocese of Seattle.

“We want to be able to celebrate with so many people throughout the Archdiocese,” Chilo said. ”People [come] from 65 parishes throughout Western Washington, [and] it’s just to celebrate the Holy Mass together.”

Simbang Gabi started in the 1500s when the Spanish came to the Philippines. Fray Diego Soria, prior of the San Augustin Convent, petitioned the Pope to hold Masses outdoors during the month leading up to Christmas to accommodate crowds. They held them in the early morning so farmers could participate despite their early work hours, and also avoid the midday heat. The term “Simbang Gabi” in Filipino means “night Mass,” and it is traditionally held at dawn or in the evening.

When Filipino-Americans brought the tradition to the United States, it was celebrated sporadically. In 1997, Seattle Archbishop Alexander J. Brunett was the first archbishop to take part in the Simbang Gabi celebration in Seattle.

“He knew that there [were] a number of Filipinos that [were] celebrating Simbang Gabi in their own parishes, but it was never recognized as part of the Archdiocese celebration, ” Jose said.

Burnett went on to encourage the entire Archdiocese to participate in the Advent celebration in all its pageantry.

When Leovy Cabrera was a child in the Philippines, there were no celebrations of Simbang Gabi in her neighborhood.

“We [were] too far from the city,” she said. “There was no church in our area.”
She moved to Olympia in 1971, but it wasn’t until about 2010 that she was invited to join the Seattle Filipino Mass.

The first year she went, Cabrera happily remembers making her star, called a parol. The star-shaped lantern, representing a guiding light for Jesus to come home, is used as part of the processional for the Mass. Each parish makes many parols and then picks one to showcase at the Mass, according to Jose.

As the Mass comes to a close, an array of sparkly and bright parols, held by parish leaders, wander their way to the centra, a throne for the bishop, as the leaders stand in front of the current Seattle Archbishop Paul D. Etienne. He blesses the leaders and commissions them to return to their parishes to commence the novena, a form of devotion and prayer consisting of special services for nine successive days.